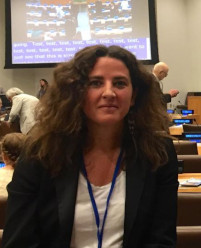 Dr Ana Elorza is a biomedical scientist by training, PhD in Chemistry and Molecular Biology by the Universidad Autónoma de Madrid and Master degree in Humanitarian Aid (NOHA European Commission) by Uppsala University. She works as Science Advice and Diplomacy Coordinator at the Spanish Foundation for Science and Technology, FECYT, a public foundation depending on the Ministry of Science and Innovation in Spain. Ana is an expert on science-policy interfaces with extensive international experience in academia, public administration and multi-lateral organizations. Her work is focused on science diplomacy, science advice, and scientific communities outside Spain. Ana supports science diplomacy strategies of different countries and trains scientists and diplomats for a sustainable future through science and innovation. She is also one of the “Ciencia en el Parlamento“ (Science in Parliament) coordinators. This initiative brings scientists to the Spanish National Parliament to hold a joint dialogue between scientist and members of parliament on the role science should play in the legislative process. Finally, she is leading as a Co-Chair of the Science Policy in Diplomacy and External Relations (SPIDER) network, a special interest division of the International Network on Government Science Advice network (INGSA) to foster the practise, theory or discussion of Science Diplomacy. Ana was involved in S4D4C’s stakeholder networking at the international level and the development and implementation of training materials for science diplomats. Ana also participated in the interview presenting the online course in the frame of the project’s “Researcher’s Voices” series HERE.