The S4D4C consortium has recently concluded the first workshop on science diplomacy in Trieste, Italy (see our previous announcement here). The event, titled “Science meets Diplomacy: a new European perspective”, was hosted by TWAS – The World Academy of Sciences, a partner in the S4D4C consortium. Peter McGrath and Sheila Sperosa (TWAS) as the local hosts welcomed 25 international participants from universities, research organisations, funding agencies, ministries for foreign affairs and various national embassies to discuss the state of the art and future directions for science diplomacy in Europe. Peter was also responsible for the opening, a presentation on the international science system and a simulation game on solar radiation management, a controversial geo-engineering technology to mitigate climate change, and Sheila for the roundtable on careers in science diplomacy. Further involved S4D4C project members were Lorenzo Melchor (FECYT), who delivered an introduction to science diplomacy and its stakeholders through an interactive ice breaker session, Tim Flink (DZHW) who gave an insight into his case study on research standards and integrity in international settings and theoretical background, Maria Josten (DLR) who led a creative session on negotiation skills and Eliška Černovská (Charles University Prague) who discussed a case study on water diplomacy and illustrated different practices of water management across national borders.

From a competitive pool of applications, participants were selected on the basis of their interest and track record in science and international relations, taking into account the geographical distribution as well as a gender balance. Altogether 16 countries from both the EU and the EU’s neighbourhood regions were represented in Trieste, including, for instance, highly experienced participants from the Russian Federation, Ukraine and Algeria to mention only a few countries.

After opening statements of Mohamed Hassan, President of TWAS, who served the Academy for over 26 years and was vital in establishing its role in the advancement of science in developing countries, Clemens Mantl, Consul General of Austria in Milan and former director of the Office of Science and Technology Austria (OSTA) in Washington D.C., stressed the effects of technological change on international relations and diplomacy*, and Marga Gual Soler, Advisor to the Horizon 2020 European Science Diplomacy Cluster, discussed the past, present and future of EU science diplomacy – echoing also her contribution to Carlos Moedas’ Research, Innovation and Science Experts Advisory Group “Europe as a Stronger Global Actor through Science Diplomacy” presented recently at UNESCO in Paris.

The workshop was rounded off with two more guest speakers: Nico Pitrelli from the International School of Advanced Studies in Trieste illustrated the deficit model in science communication and Pierguido Sarti, who is the Italian Science Attaché in Pretoria and currently works on the Square Kilometer Array project in South Africa, shared insights and practical advice about conducting science diplomacy when working in an embassy.

On the second of three days, the workshop participants visited Elettra, a synchrotron third-generation light source facility close to Trieste, where over 1000 user scientists from different countries collaborate and share knowledge, technical equipment and laboratories – a truly inspiring practice of science crossing borders and uniting cultures.

Overall, the feedback to the workshop was very positive. This was attested not only by the evaluation forms, but can be observed also in several of the tweets from the event:

In my last hour of train ride back from The Science Diplomacy workshop in Trieste/Miramare. Lots of new impressions and ideas, got to know new people from different areas linked to science (and/or) diplomacy. Great event, thanks for organising! #SciDipEurope @S4D4C @TWASnews pic.twitter.com/hbPfPGkST6

After a good night’s sleep on this beautiful and fruitful @S4D4C workshop on #ScienceDiplomacy at @TWASnews, one quote from @margagual‘s take on careers in #SciDip comes back to mind: “Insert yourself in places where you are rare.”
The road looks long but promising !
Cheers ?? pic.twitter.com/CrHVXgZAs1 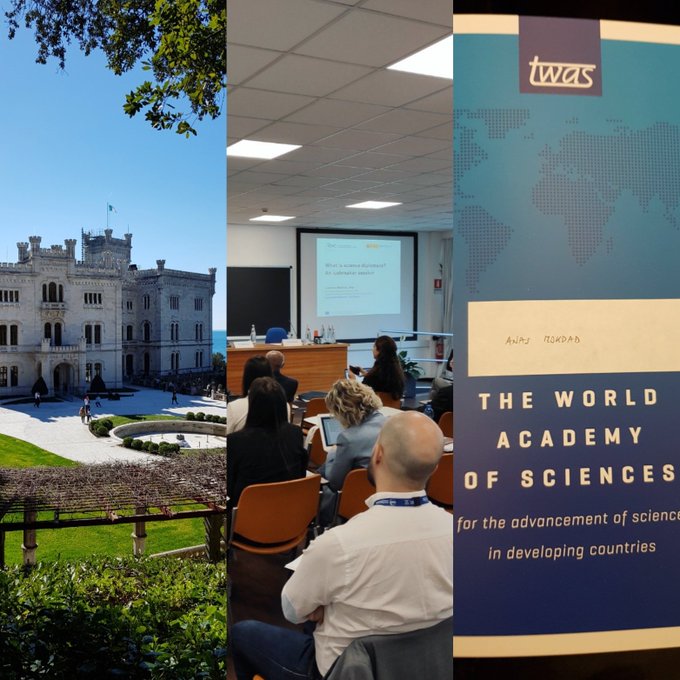 The #SciDipEurope workshop gave me food for thought in every sense ?

Again, a big thank you @S4D4C @TWASnews for organizing it. Keep up the great work! https://t.co/rcLTZ7KvDR

Going home with more structured mind, feeling being back to my roots in international STI cooperation and diplomacy. Bringing new ideas home. Thanks to @TWAS, @S4D4C @margagual @DrLMelchor, @COSTprogramme and all colleagues behind the scene! Great workshop!

The second S4D4C science diplomacy workshop takes place in Vienna from November 25-27! We are already looking very much forward to welcoming another group of participants and speakers and will keep you updated.

* You can read a review of Mr. Clemens Mantls intervention at the Trieste workshop on the website of TWAS.