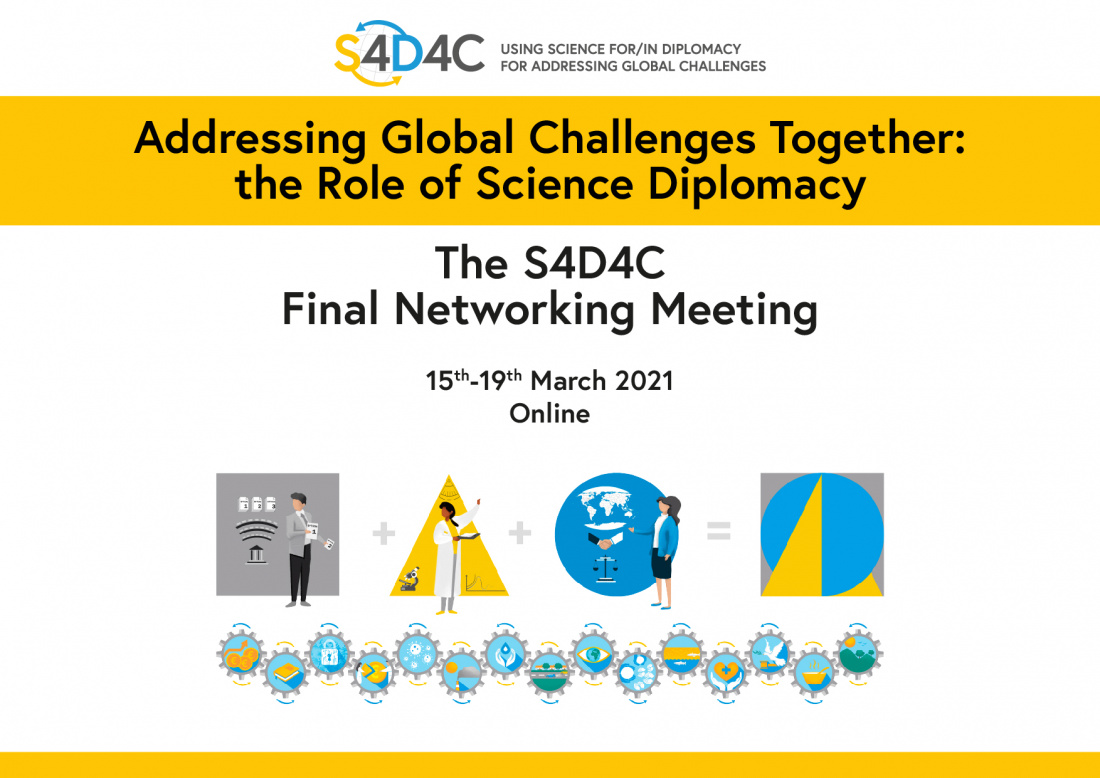 From 15-19th March, the S4D4C project organized its virtual final networking meeting. The conference aimed at bringing together and strengthening a European and global science diplomacy community. The S4D4C partners decided to make the best out of the need to have a virtual conference because of the COVID 19 and planned an ambitious agenda. More than 120 speakers from almost 30 countries from all over the world (Argentina, Austria, Belgium, Brazil,  Canada, Czech Republic, Egypt, Finland, Germany, Guatemala, India, Italy, Latvia, Luxembourg,  Malaysia, Mexico, Montenegro, Nigeria, Norway, Portugal,  Serbia, Spain, South Africa, Sweden, Switzerland, The Netherlands, Tunez, and the United States of America) participated in the conference.  Among the speakers, there were international organizations representatives, national policymakers and diplomats, science diplomacy experts, European Commission and European External Action Service high level representatives and officials, researchers and more. We were also extremely satisfied with the participation, with more than 750 participants joining the conference.

The conference was supported by a good number of high-level dignitaries, such as Mariya Gabriel (European Commissioner for Innovation, Research, Culture, Education and Youth), Minister Anja Karliczek (German Federal Ministry of Education and Research), Minister Mabel Torres (Colombian Ministry of Science, Technology and Innovation), and Minister Pedro Duque (Spanish Ministry of Science and Innovation). All of them prepared an audio or a video for the audience in which they stressed the importance of science diplomacy in addressing global challenges. Their video interventions are available on our YouTube channel.

The plenary sessions during the 5 days of the conference were organized around the different spheres the S4D4C project has identified as key to foster a strong, diverse, and agile science diplomacy for addressing global challenges: knowledge, governance with no silos, institutions, alliances and people. During the plenaries, the S4D4C partners presented their main findings and reflections around those spheres (the “S4D4C in the spotlight sessions”) and they were followed by round tables in which different experts would elaborate on each topic.

The parallel sessions were a good opportunity for different communities to delve into concrete science diplomacy dimensions, projects or activities (from the role of arts in communication of science and diplomacy to science diplomacy careers for researchers, just to name a few).

One of the most vertiginous sessions was probably the “Science Diplomacy community flash talks”, in which 12 speakers presented their science diplomacy work in five minutes time. It was impressive to see how many initiatives are happening all over the world.

The social dimension of the S4D4C conference

In spite of the conference being virtual, we made an effort in trying to build the science diplomacy community and in allowing participants to interact among themselves and with the speakers. The conference platform allowed for bilateral meetings among participants and, also, we celebrated two virtual get-together with the participants in which we could speak in a relaxed environment with those participants attending the session.

During the final conference day, Elke Dall, the coordinator of the S4D4C project, announced the launch of the European Union Science Diplomacy Alliance, in which partners from the three science diplomacy consortia funded by Horizon Europe will come together to keep nurturing a European Science Diplomacy community after the end of S4D4C.  Click here to know more.

You can visit the summary of each day of the conference:

From an outside perspective on the final networking meeting, we invite you to read the article written by Sneha Sinha, from the Research and Information System for Developing Countries (RIS) here.

We want to thank all the speakers and participants for a week full of energy, projects and ideas on how to foster science diplomacy for addressing global challenges. You will hear from us through the European Union Science Diplomacy Alliance!