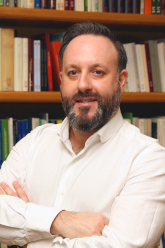 Eduardo Oliver is a Senior Research Fellow at the Spanish National Center for Cardiovascular Research (CNIC; Madrid), and current Secretary-General of the Network of Associations of Spanish Researchers and Scientists Abroad (RAICEX). Eduardo is a PhD in Pharmacology who developed an international academic career on the search of new therapeutic targets and strategies against cardiovascular disease. He is recipient of the 2016 Young Investigator Award of the European Federation of Pharmacology (EPHAR) and the 32nd Young Pharmacologist Award of the Spanish Society of Pharmacology. During his tenure at Imperial College London, he played an important role in the conception and development of the Society of Spanish Scientists in the United Kingdom (SRUK/CERU), in which he held various responsibilities, becoming its president (2015-16) and current ambassador in Spain. He is a science advocate, being involved in different initiatives related to science policy, science diplomacy and science advice. Eduardo is member of the DECIDES Committee on Scientific Policy of the Confederation of Spanish Scientific Societies (COSCE); expert member on expatriate scientific talent networks of ‘Los 100 de Cotec’; and one of the coordinators of the citizen initiative ‘Ciencia en el Parlamento’ that promotes the use of science for policy.