System transformation involves profound and interrelated changes in all facets of society, including “skills, infrastructures, industry structures, products, regulations, user preferences and cultural predilections” (Schot and Steinmueller 2018, 9; Geels 2005). System transformations may be understood as resulting from either the ‘problem perspective’ or the ‘solution perspective’. In both cases science diplomacy can play a key ‘mediating’ role. The former perspective implies that science diplomacy serves as the main connector between demand and supply (of solutions, in our case, STI), where ‘problems advocates’ or circumstances push issues into the foreign policy agendas, so that such problems are ultimately addressed. The latter perspective implies that ‘solutions advocates’ or circumstances frame problems in such a way that some ‘preferred solutions’ are implemented. Regardless of where the system transformation begins, science diplomacy typically deals with the need for a clearly agreed upon definition of the problem to be addressed, which implies deliberation and reflection practices by different stakeholders, who normally have differing goals, agendas, and understandings of the causal models behind. Such versions of ‘the’ problem to be addressed with science diplomacy practices inspire or shape to some extent scientific knowledge production and communication practices, whereby science diplomats play the role of intermediaries and translators for the different epistemic communities,

sectors and stakeholders concerned. This process requires the facilitation of deliberation in discussion fora, and knowledge gathering processes, which are in turn determinant for setting the appropriate scene towards constructive and productive system transformation, considering incumbent politics and powering practices. These transformation processes involve the collibration of tensions spurring at different governmental and sectorial interfaces and at multilevel interactions.

In practice, the tensions occurring within and between different science diplomatic arenas of practice lead to the need of considering a single or a combination of principles to be implemented to relieve the tensions in question. The number of possible tensions is extremely large, and relates to the complexity of the issue, the respective arena and the links to the surrounding international politico-scientific context. Where the arenas overlap, and depending on the specific situations, some principles are more relevant than others. However, trying to connect tensions with principles one-to-one at the arena level or at the intersection between two or three arenas is not only impossible but pointless. 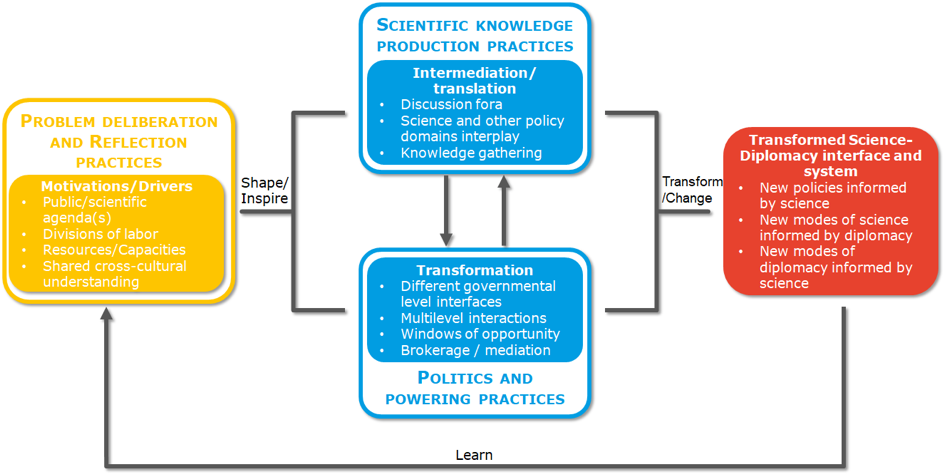 Still, following a set of basic principles for effective brokerage and mediation, allows for windows of opportunity to open up to facilitate systems’ change. In this sense, systemic change involves a transformed science-diplomacy interface, resulting in new policies informed by science, new modes of science informed by diplomacy, and new modes of diplomacy informed by science. Learnings at the systemic level feedback into the whole socio-technological system both locally and globally, affecting the future productivity and constructivity of the next science diplomacy interaction space.

Actors from different practice arenas enter the interaction space if they have a relevant role and specific interest which is at least partly shared. Their respective practices (problem deliberation; scientific knowledge production; politics and powering) can feed interaction and joint work on the respective shared issue of interest; by means of collibration, i.e. the continuous rebalancing and recalibrating, of resulting tensions and active involvement of science diplomats as policy entrepreneurs, new practices can emerge and can be facilitated if appropriate principles are met, and such transformed practices can feedback into the three arenas as well.