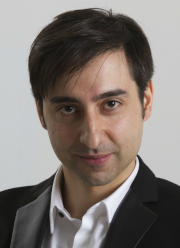 Dr Lorenzo Melchor has a PhD in Molecular and Cellular Biology by the Universidad Autónoma de Madrid (2008) and Master Student in Policy Analysis in the Universitat Oberta de Catalunya. He worked as EU science advice and diplomacy officer in the Spanish Foundation for Science and Technology (FECYT), being directly involved in the S4D4C consortium. Formerly he has been a science adviser in the Spanish Embassy in London between 2015-2018. Additionally, Lorenzo has been a biomedical researcher for 13 years with an international career in Spain, the US, and UK, and over 30 peer-reviewed scientific articles. Lorenzo is a specialist in designing and executing different schemes to bring scientific knowledge and public policies together. He participated as a fellow in the Royal Society Pairing Scheme in 2013, designed and organised two editions of Ambassadors for Science—a pairing programme between scientists and diplomats in the Spanish embassy in London—and conceived and developed different training workshops in Europe and Latinoamerica. Lastly, Lorenzo was the founding president of the Society of Spanish Researchers in the United Kingdom, an expert member in knowledge management and transfer in the Scientific Advisory Council of Fundación Gadea Ciencia, and coordinator of #CienciaenelParlamento, an initiative to foster legislative science advice in Spain. After his involvement in the project, he started to work at the European Commission, Joint Research Centre. In S4D4C, he was the lead author of several policy reports as well as the mastermind behind the European Open Online Course on Science Diplomacy, the highly successful MOOC developed in the project. He and his colleagues were interviewed HERE in the frame of the “Researchers Voice” series on the course. He also contributed to many S4D4C events as an engaging speaker and trainer.