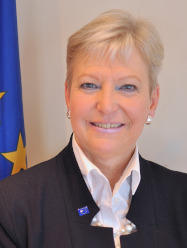 Marie-Anne Coninsx is Ambassador at Large for the Arctic, since September 2017. She previously was European Union’ Ambassador to Canada (2013-2017) – where she extensively visited the Canadian Arctic, after serving 4 years as the EU Ambassador to Mexico.

She also served as the number two at the EU Delegations in New York and Geneva, providing her with extensive experience on multilateral issues. She has been an EU official since 1984.

Ambassador Coninsx studied law at Gent University (Belgium), did post-graduate studies at Cambridge University (UK) and at European University in Nancy (France). She is Belgian and speaks 5 languages.