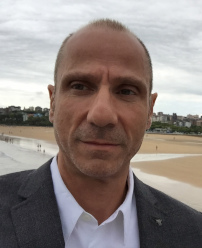 Miguel Oliveros, born in Madrid and with a degree in Law, is a Spanish diplomat since 1991. He is being posted to Finland, the Netherlands, Morocco, Venezuela, United Kingdom and as General Inspector of Services at the Spanish Ministry of Foreign Affairs. He is experienced in consular affairs and has worked in Law of the Sea, the Organization for Security and Cooperation in Europe and the European Council. He was recently Director General of Casa Mediterraneo, an organization to perform Public Diplomacy in the Mediterranean basin and where he prepared and produced different events on Culture, Science, Diplomacy, Politics and Economy. Currently he is Minister Counselor of Cultural and Scientific Affairs at the Spanish Embassy in London.