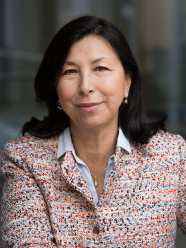 A graduate of Institut National Agronomique de Paris-Grignon (Agro ParisTech), Minh-Hà Pham wrote a dissertation on neuroscience (Sorbonne Université). She is a CNRS Research Director, First class. Between 2013 and 2018, Minh-Hà Pham served scientific advisor to the French Embassy in Washington and she developed collaborative programs with major American research institutions.

Previously, she served as deputy director for the Asia-Pacific region from 2002 to 2007, then joined the ParisTech group as a representative for joint international relations until 2010, when she returned to CNRS as director of European and international relations until 2013. She was seconded at ParisTech as the Delegate in charge of implementing international actions common to the members. As a scientist, she directed an INRA laboratory on invertebrates. She published some hundred scientific articles, taught courses in entomology, and helped launch a startup.