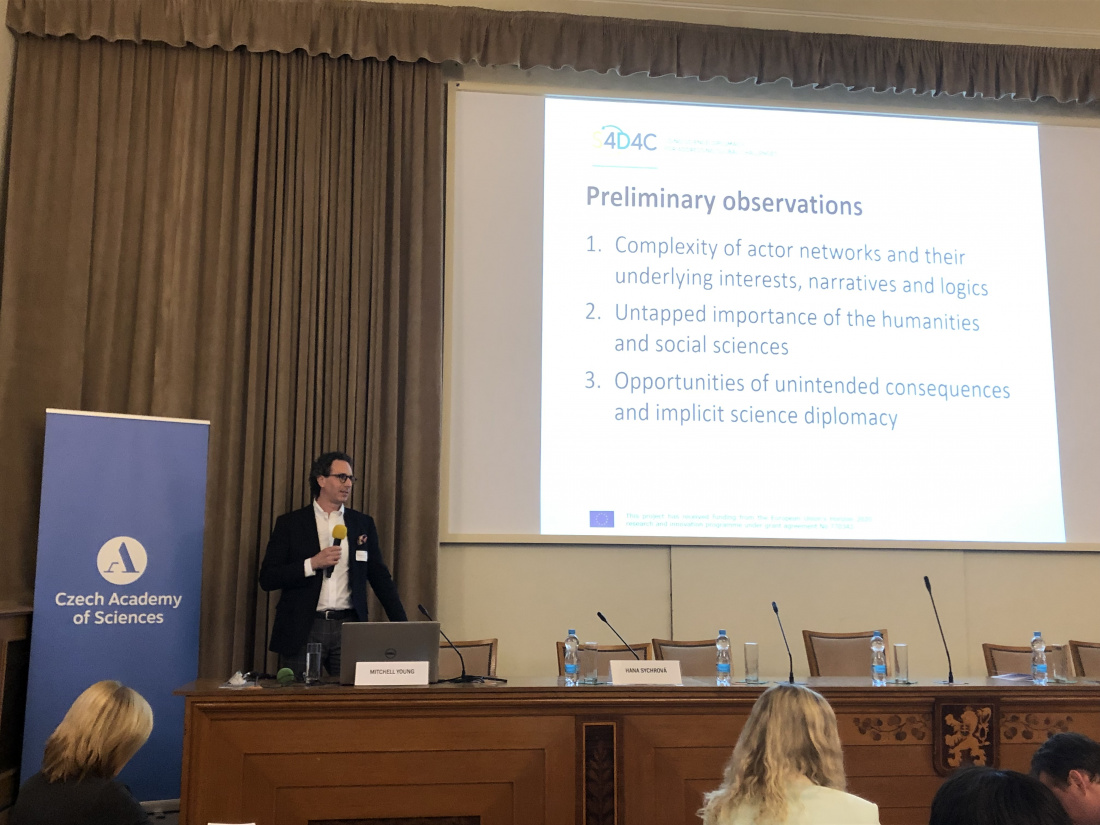 On 30/31 October 2019, the Czech Academy of Sciences (CAS, presided by Eva Zažimalová) in cooperation with the European Academy of Sciences and Arts (EASA) and ELI Beamlines, organised the 10th Danube Academies Conference in Prague. The meeting was dedicated to two broad topics: Science Diplomacy and Research Infrastructures. The Danube Region is an important macro-region in Europe, as confirmed by Commissioner Johannes Hahn in a recorded welcome to the participants shared by EASA President Felix Unger.

The EU Science Diplomacy Cluster projects S4D4C and InsSciDE contributed to the discussion with representatives of the Czech science system, the Academies of Sciences and Arts of the wider Danube Region, and invited diplomats. The lively session on science diplomacy in Europe chaired by Hana Sychrová (CAS) shed light on different perspectives:

In other sessions, topics like Danube countries success in the EU Framework Programmes or ERC, the set-up of a transnational pension solution for researchers, concrete examples from Serbia and Hungary, as well as the role of research infrastructures in cooperation were discussed. Ambassador Virginia Hesse of Uganda outlined European-African Academies of Science cooperation on climate change response (biodiversity, food and water security), stating “we all created the global problems. It’s our joint responsibility to find solutions – now or never.”

Representatives of the Czech Ministry of Industry and Trade and Foreign Ministry (Karel Havliček and Martina Tauberóva) highlighted the ambition to become an innovation leader – “Czech Republic: Country For the Future” – which includes active science policy and increased international cooperation, with an emphasis also on the complex relationship between science and diplomacy and ‘nation branding’. In the conclusions and discussions, it was also clear that the landscape of competition and cooperation has changed a lot in the past 20 years. Countries that were once competitors are now partners within the EU, and relationships to the US, China, African countries are changing. Academic institutions are crucial to reach mutual understanding.

The cooperation in the Danube Region puts countries together that are Member States with enlargement and neighbourhood countries, and brings countries into the focus of bilateral and multilateral collaboration that otherwise would probably not have been priorities. Several initiatives have been launched in the priority areas of the joint strategy related e.g. to knowledge society, competitiveness and skills, such as for example: regular multilateral calls for funding; capacity building and networking projects such as the Danube-INCO.NET; a regular award for extraordinary scientific achievements and impact in relation to the region and many others which tick the boxes in relation to definitions and role conceptions for science diplomacy outlined also in the S4D4C State-of-the-Art report. The stakeholders stressed the mutual and reciprocal benefits from cooperation and sharing in the context of upstream/downstream cooperation in the Danube Region and transfer lessons learnt to the Alpine macro region (as discussed by Harald Pechlaner and Ronald Benedikter on the second day of the event) and the joint objective to increase the profile and position of Europe in a knowledge based world.