On the 24th of June, the National Council of Science and Technology of Panama (SENACYT), in collaboration with the Ministry of Foreign Affairs and the City of Knowledge Foundation, organized a webinar to present the current state and future challenges of Panama’s science diplomacy strategy.

The dialogue was divided in two panels. The first, made up of Anabella Vásquez Fábrega (Director of SENACYT’s International Cooperation Office), Thaís Collado (Ministry of Foreign Affairs) and Jenny Pimentel (Legal Advisor for SENACYT’s International Cooperation Office), answered the questions: What is science diplomacy? Where are we? Where are we going? In the second one, scientists Ivonne Torres (University of Panama), Marta Pulido (S4D4C’s Open Doors Programme grantee) and Rolando Gittens (Institute for Scientific Research and High Technology Services in Panama) talked about their views and experiences in science diplomacy.

Anabella Vásquez opened the session welcoming attendees and stressing the importance of science diplomacy for Panama, which aspires to become the first Latin American country to include a chapter on science diplomacy within the law of the National System of Science, Technology and Innovation. 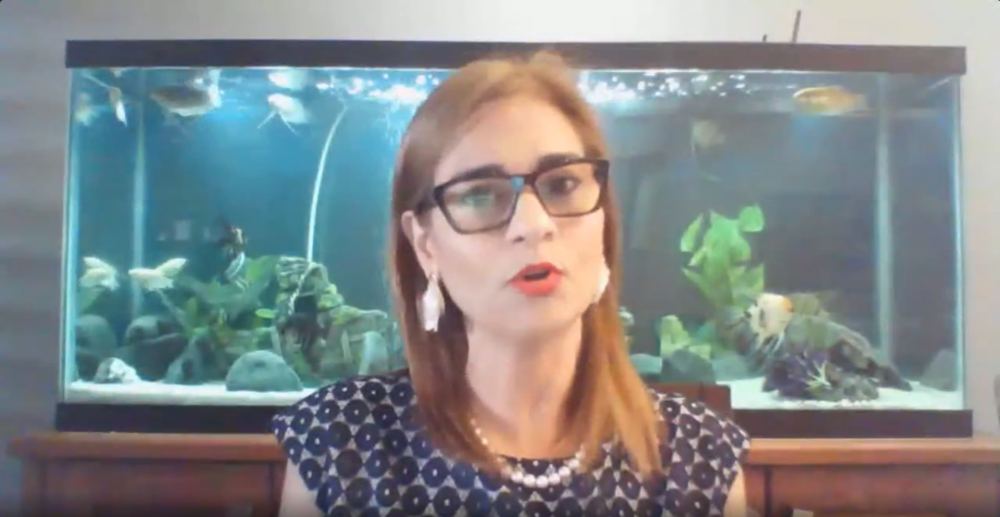 To explain what has been done to date by the Ministry of Foreign Affairs, Thaís Collado took the floor. After a brief introduction to the concept of science diplomacy and its usefulness in a changing world where science and technology drive social and economic progress, Thaís commented on the need to coordinate the efforts of the public and private sectors to develop international cooperation projects. To this end, between 2018 and 2019, the Ministry of Foreign Affairs, together with SENACYT, convened the different stakeholders to design the strategy on science diplomacy. 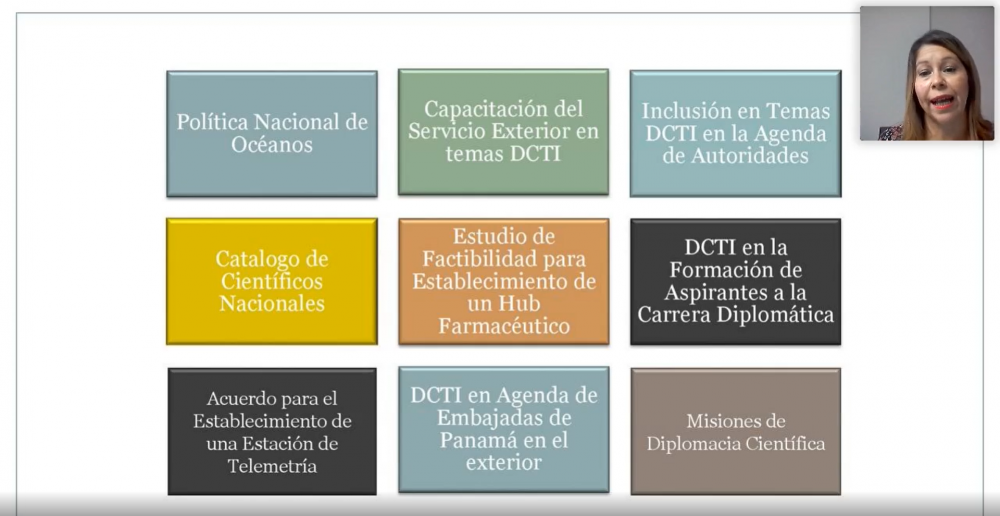 Nowadays, there are different actions in progress, including trainings on science diplomacy for diplomats, a national ocean policy, an agreement with the Indian government to establish a telemetry station, the building of a database of national scientists and the establishment of a pharmaceutical hub. She concluded that:

International Cooperation in Science and Technology impacts on the development of the country and the welfare of its citizens, but it needs the involvement of all stakeholders. 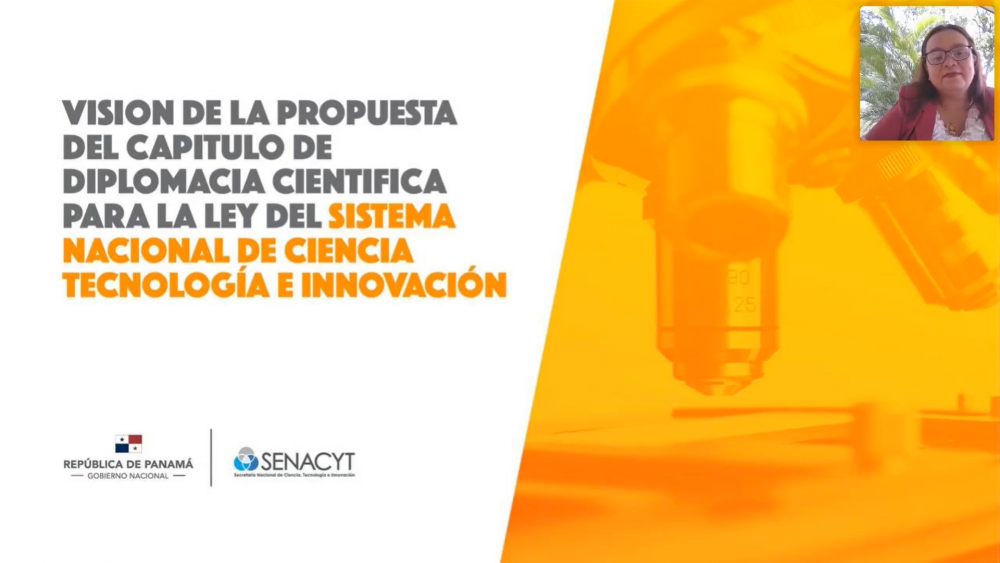 We detected some needs in our science and innovation system, so we worked on a proposal, a chapter on science diplomacy, to fill them, based on the combination of previous efforts.

The strategy also reaffirms Panama’s commitment to the 17 Sustainable Development Goals (SDGs) from the 2030 Agenda. For instance, regarding SDG 9 (industry, innovation and infrastructure), the chapter aims to promote the role of Universities as a science and technology hub, by increasing the science budget. Nowadays, it is notably lower than that of the surrounding countries, like Mexico or Costa Rica.

SDGs were also the main focus of Ivonne Torres’ intervention. Ivonne, PhD in Pharmacology, Director of the Pharmacology Department at the University of Panama and founder member of the movement Science in Panama, talked about gender equality (SDG 5). All around the world, women account for the 35% of STEM students. Numbers get worse when looking at leadership positions, as the percentage drops to 5%. However, evidence shows that an increase in women’s participation in the STEM field not only can boost economic growth, but is also likely to make technological innovation more inclusive and responsive. Furthermore, women’s inclusion in science advice (e.g. climate change) have proven to be leading the way towards more equitable and sustainable solutions.

For Ivonne, women need to feel it is possible to be part in the dialogue round tables to advise policymakers. Historically, women do not aspire to a diplomatic position.

Mentorship to young women is essential to increase their participation in diplomatic and/ or scientific career. Despite many countries having made progress on parity, it is necessary to establish legal frameworks that promote it.

There are several barriers for women in science diplomacy. From male dominancy in science and diplomacy, through family reconciliation, to low female representation in politics. Ivonne noted that countries with high equitable governments top world economic rankings. And at this moment of global health crisis, diversity has helped to make more creative decisions that have contributed to preserving the health of world population. So, “let’s work to integrate women in science diplomacy”, concluded Ivonne.

To build any integrative dialogue, communication is a must. Marta Pulido, PhD in Biomedicine, Science Writer and Marketing Manager at Scientific American Spanish Edition, learned the importance of communication in science diplomacy during her training as S4D4C’s Open Doors Programme grantee, her participation in S4D4C’s second Workshop on Science Diplomacy and the launch of SciTechDiploHub as Communications Lead. «Humanity is facing grand challenges, but no country can tackle them alone», stated Marta. «An African proverb says: If you want to go quickly, go alone. But, if you want to go far, go together. This summarizes the spirit of science diplomacy, an exciting journey where your fellows are diverse». From the scientific sector, through governments and private companies, to civil society, science diplomats should learn how to effectively communicate with each stakeholder in order to build bridges between them. 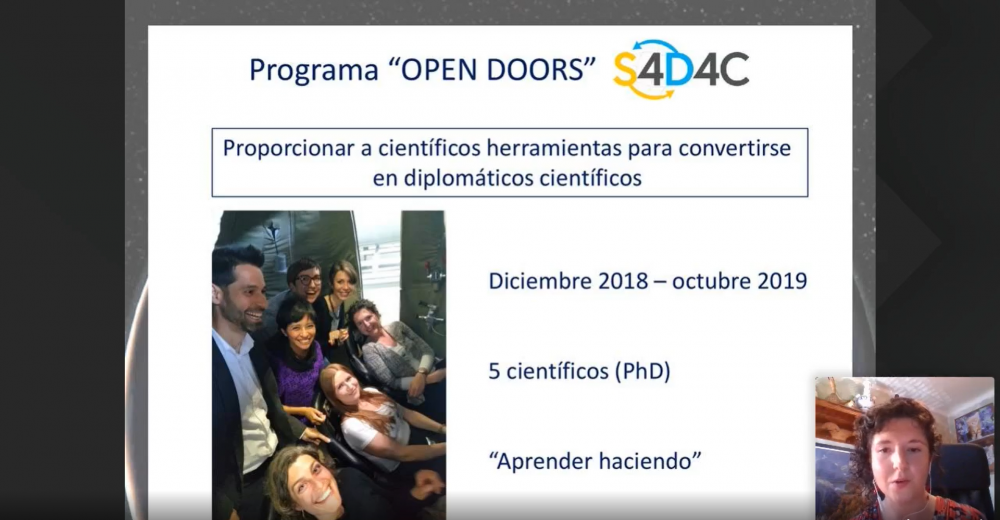 «You should have strong communication skills to be able to sell the value of science to policymakers, public officers and any other partner. Finding a common language is also essential to start any negotiation process between all parties involved in science diplomacy», she explained. Trustworthiness is another quality that a good science diplomat should have.

Your partner should trust you to reach an agreement. And if people trust you, they will be more predisposed to collaborate with you. A social network of valuable contacts, together with proactivity, helps to make things happen.

Talking should go hand in hand with listening too. «Empathy, being able to put on the other’s shoes, open-minded to other opinions and sensitive to other cultural realities will enrich you. And of course, since we are talking about science diplomacy, you should be familiar with science and its system, as well as not being afraid of involving yourself in political and international issues».

Marta and her fellow Open Doors grantees identified communication, together with other essential skills in science diplomacy, when summarizing the learning by doing training they had undergone for 5 months. During this time, they met, interacted and exchanged visions with other scientists, diplomats, policymakers and government officers. In other words, they spend much of their time talking and communicating both their research and their views on science diplomacy. However, they also noticed that there is a long way to go. «I encourage anyone interested in the subject to train, through the different options available, like the S4D4C’s online free course», she concluded.

Moving scientist form theory to practice and involving them in science diplomacy is necessary to make evidence-based policy as Rolando Gittens, PhD in Bioengineering and researcher at the Institute for Scientific Research and High Technology Services in Panama, emphasized. Wicked problems, such as the current COVID-19, climate change and biodiversity collapse, exceed borders and need international collaboration. 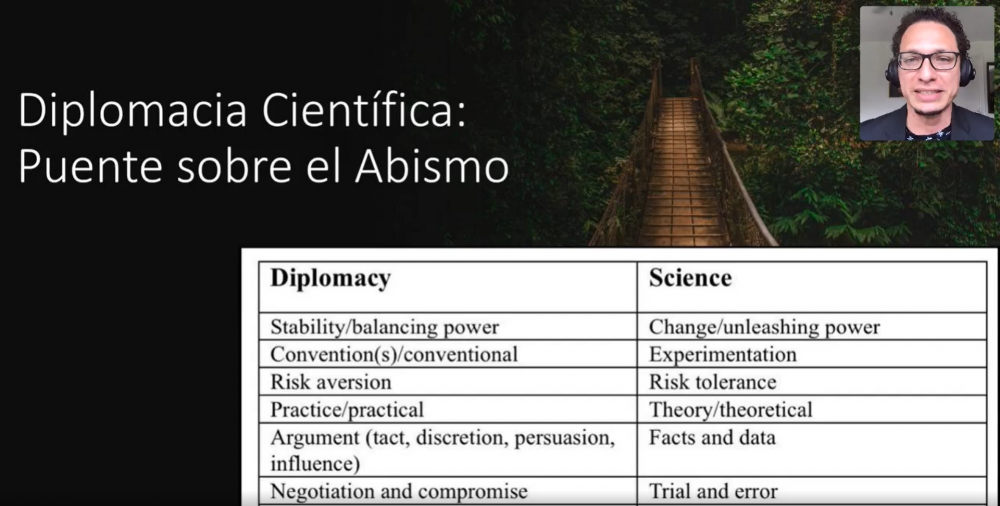 The pandemic we are facing is an excellent, albeit sad, example of how we must coordinate both at national and international levels», he declared. «But this will not be the last problem that we will have to address using science and technology international cooperation. However, there is a lack of training for scientists to gain the necessary soft skills to interact with diplomats and policymakers».

If Panama is able to adopt science diplomacy in an institutionalized way, more training programs will be available where national scientists and diplomats can know first-hand the reality of the country. «Currently, Panama interacts with different countries in Latin America, but also with China. Science diplomacy could help to strengthen these relationships and also to promote the country. Moreover, scientists can act as ambassadors, since most of them have gained their PhDs outside Panama, so they have a valuable network of international contacts», noted Rolando.

Personally, trainings on science diplomacy have broadened my horizons. Now, I clearly see the importance of involving scientists in decision making processes. For instance, let’s think that behind every SDG there are several technical and scientific projects designed to fulfil it. This could serve as a guide to governments in the design of their science diplomacy strategy.

Panama science ecosystem is still small, but it’s growing fast and it’s plenty of well-prepared scientist eager to contribute to the country’s progress.

Rolando closed the webinar stating that :

We, scientists, live at the border of human knowledge, focused in our field of study. As a result, we find it difficult to interact with people from other areas, like diplomats or policymakers. But this doesn’t mean that we shouldn’t be there.

The recording of the event (in Spanish) is available here.

The S4D4C consortium would like to thank Marta Polido, who was one of our grantees for the Open Doors Programme and then presented her experiences already at our conferences for kindly providing this article!

And as you are just reading about Panama, we can also proudly mention that the Panama Ministry of Foreign Affairs has also joined in promoting and sharing our open online course:  https://mire.gob.pa/noticias/curso-sobre-diplomacia-cientifica! Thank you!