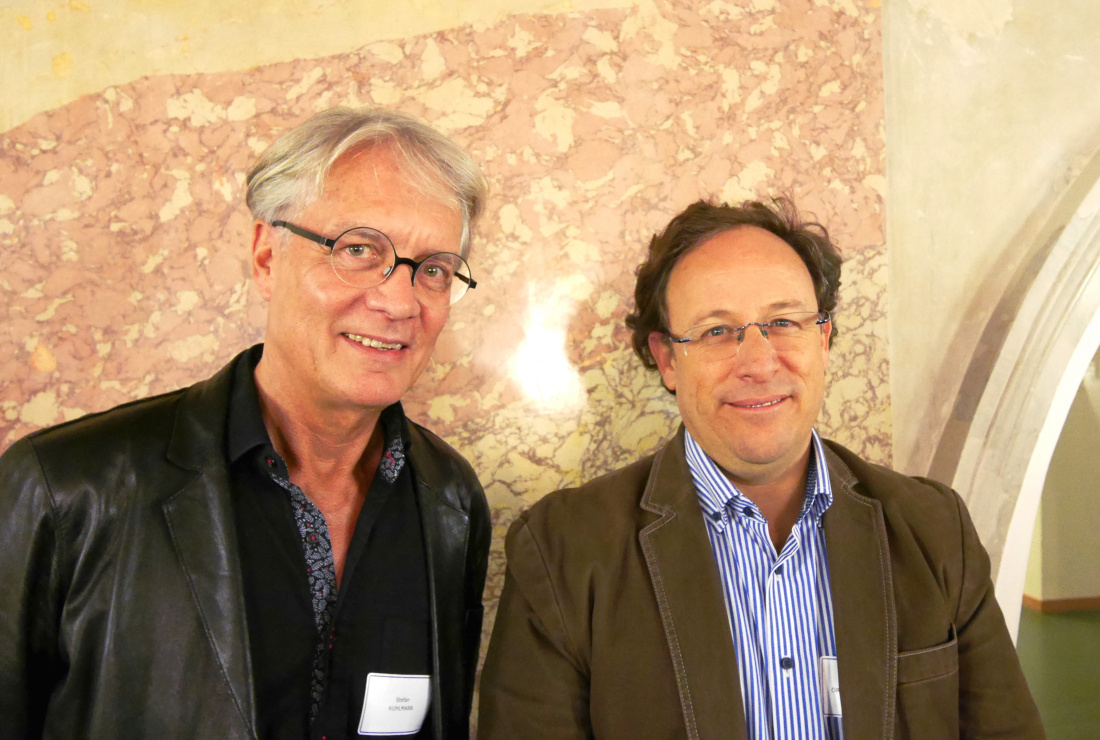 Just after S4D4C’s 2nd Networking Meeting in Berlin, a dedicated co-creation workshop for discussing S4D4C’s science diplomacy governance framework has taken place on the next day. We have been there to meet the team behind the governance framework.

The co-creation workshop has taken place on October 11, on the margins of S4D4C’s 2nd Networking Meeting in Berlin. Could you tell us more about the participants –  who are the people, what are their backgrounds, what is their focus?

Stefan: We have invited people who probably will make use of the governance framework in their future work. For now, we call the concept “science diplomacy governance framework”, yet it is not sure whether this will also its final name. We have had participants here coming from research funding organisations, research organisations, universities, intermediary organisations between science and diplomacy, ministries, and from the foreign service. All of them have had at least some experience with this concept of science diplomacy in their respective contexts. They came from various countries in Europe but also other places in the world.

Tell us more about the background of the governance framework and the objectives related to it.

Stefan: Firstly, it’s not a definite concept yet and still work in progress. Our basic assumption is that there is a growing interest – at least in Europe – to have some guidelines on how to cope with situations when actors from science and from diplomacy need to work together. On the one hand we observe an increasing desire in the community to organise this collaborative work more structured and effectively – particularly in view of challenges that are lying ahead in the future. On the other, it is almost impossible to develop one concept fitting all contexts, since they are very different. This makes it actually very complex. Also the science diplomacy case studies that have been done in the S4D4C project show very clearly the variety of situations how science diplomacy can be deployed.

And also the networking meeting yesterday has confirmed that. So again, we start from the understanding that the concept of science diplomacy is not precisely defined, and probably never will be. It is rather a kind of “umbrella term” and under this umbrella various things are covered. Thus, there will be always contestations about what is relevant and what not, based on different readings within different stakeholder groups. Or the question what we should do and how we should do that. This all led us to start exactly from here – from an observation that there is complexity and uncertainty, fuzziness etc. attributed to science diplomacy. We want to develop procedures, principles and guidelines that help actors which are exposed to such conditions and in very different situations.

In the end this should allow them to organise their own work more constructively and productively. We know that this is quite abstract, and the next challenge will be to translate this type of procedural thinking into more concrete recommendations which are still general enough to be applied in very different contexts.

This was the key message that we shared with the stakeholders today. Despite being widely accepted across the workshop’s audience, many of them explicitly asked to being more concrete in our work. But not surprisingly, when they refer to “concreteness” they consider their own working environment. So again this is the challenge with having many concrete demands from specific sectors dealing with science diplomacy.

This complexity that we are trying to get across right now and the difficulties described were all acknowledged by the audience. Even more, people already during our workshop were very supportive in providing ideas on how to move forward. And this work together was really exciting – and it was fun for both us, the University of Twente team, and our participants.

Gonzalo, do you share these impressions from Stefan about the workshop?

Gonzalo: Also to the other question about our objectives with the governance framework – yes we want to identify what would be the best conditions in Europe (and maybe facilitated by Europe) there can be for science diplomacy to thrive, to exist, to operate.

We are departing from the assumption that the world needs better policies, better science, and better international relations and altogether need to contribute to a better world. So in this case we want to identify the conditions that need to be in place in order to allow science diplomats tapping into their full potential as leaders for change and transformation in society. They have the role typically to translate and to harness science and diplomatic assets for making better decisions. And then the question is what are the appropriate arrangements, where are the appropriate values that should inspire all these activities? What are the guiding and minimum conditions for distinct things to happen both at the national level but also at the EU level?

To the workshop itself – I think it was, as Stefan mentioned, a very interesting exercise. By design, we didn’t want to brief the participants about the governance framework just apart what can be found on the S4D4C website. We wanted them to reflect based on what was presented and discussed yesterday during the networking meeting. We wanted them to recount their own perceptions, their expectations about the governance framework. As I said, by deliberation we really didn’t want to bias their thinking and let them very openly approach the topic from their standpoints.

We contrasted between what they expected based on their own understanding and our own rationale behind the governance framework. In the third and last step we went to identify some next steps. There were multiple perspectives, multiple interests, multiple expectations, but also warnings. For example, there are language issues in terms of science diplomacy depending on the corner of the world you are based in.

Stefan: To pick up on what Gonzalo just said – the language is an issue here, because for now the concepts that we use, the words that we have introduced are very much drawing on sociological or political science reasoning. Later we will have to make sure that this is translated into a language understood by the target audience. So on the one hand diplomats, policymakers, and on the other hand interested scientists. These sociological terms that we use are usually not very well known there.

Did the workshop allow you to learn more about “the language of your participants”?

Yes, and for the same reason we will also have another workshop in Vienna from November 25-27. I guess there we will make similar experiences. We even consider, before the final publication, to check again with our stakeholders whether the language is clear to them and we actually use the language they prefer.

Is the workshop in Vienna building on the results of today’s workshop?

Stefan: Actually the plan is to have two completely separate workshops. We want to start with the next round of experts at the same level as we did today and, by deliberation, don’t feed them with the feedback from the first workshop. Just as a team of trainers we might go through the one or other situation in the second workshop different than we did in the first one.

We have heard about the difficulty to make the governance framework fit-for-use in different regions and contexts. Did your participants today, mainly coming from Europe, shared their opinion about this particular issue?

Stefan: Today some people were saying that the governance framework should be “made fit for European purposes”, whilst others said “well, one of the missions of Europe is to speak out loud to the world and that means to interact with the rest of the world, so make it fit for a more global purpose”.

So there is some polarity here that we have to think about. At least in my understanding, but maybe Gonzalo has a different point of view because he is coming from a non-European country. In my view it should, first of all, give room to the intra-European coordination and learning in science diplomacy. But that should not delineate the reach of our work and it could be positioned in a global context. One of today’s participants came from the foreign service of Brazil – and also he made very clear that this also his expectation towards the framework.

Gonzalo: This discussion is not easy because you have this expectation that EU science diplomacy should look for the interest of the EU. But if you consider the composition of the EU as a combination of Member States which also have different national expectations and those might even contradict each other, then how to call it a “EU science diplomacy”? We should also acknowledge the fact that there is both the need for cooperation and for competition, because that is how the world is arranged today. At the end it is not about simply having an egoistic or individualistic perspective in international politics and science diplomacy, but to contribute to a better world. But, again, there is no consensus as to what the ultimate ambition of the science diplomacy governance framework should be, as long as it is providing conditions for science diplomacy to happen. But how, that is the difficult question.

Stefan: We already made use of the S4D4C state of the art report, the needs assessment as part of it and the first versions of the empirical case studies. We are awaiting the final versions of the case studies in order to do a more in-depth analysis. It is quite likely that exactly these nine case studies will provide very rich material for our own work. Our participants today also made the same recommendation to use the case studies for integrating very practical aspects of science diplomacy in our, per se, more theoretical governance framework.

About our next steps more in general. There will be a policy brief on the governance framework published before the end of the year. And there will be another deliverable about the two workshops here in Berlin and later in Vienna. We got a very interesting hint during the workshop today to do some piloting and testing of the framework with practitioners in “real situations”. This is a very good hint which we have to discuss within the S4D4C project in order to see whether we have time and resources for it. And there were some comments today to take more time for our work – beyond the project lifetime. One other idea was to ask the European Commission for extra funding in view of developing a really solid product. Because, once solid, tested and validated, it has the potential to be used by thousands of people.

Gonzalo: The transversal analysis of the nine case studies in particular will give us a lot of inputs for the governance framework. Vice versa, many of the insights that we will get by working on the framework will fed back into the trainings on science diplomacy offered by S4D4C. The design and composition of the knowledge resource platform on science diplomacy as part of the project website relates, to some extent, also to the framework.