On February 5, 2020, the SDG Bergen Science Advice (SDG BSA) unit of the University of Bergen organised a special workshop on the topic of “Science Diplomacy in the age of the SDGs”. The workshop took place as part of the second national SDG Bergen conference. The workshop invited to discuss how scientists, who want their research to have societal impact, reach decision-makers in large bureaucratic organisations such as the United Nations (UN) or the European Union (EU).This science diplomacy workshop was fully booked with around 50 attendees who were mainly early-career researchers with an interest in SDG-oriented research and how their own results could reach decision-makers.

The event was officially opened by the Pro-Rector of University of Bergen, Margaret Hagen, who highlighted the importance of cross-disciplinary conversation around the SDGs and the increasing value of social sciences and humanities in the discussion.

The Scientific Director of SDG BSA, Edvard Hviding, introduced how this strategic unit focuses on SDG-research and the organisation of official side events alongside key international gatherings of experts, such as the UN Ocean Conference in 2017, the COP24 in Katowice in 2018, or the UN Biodiversity Beyond National Jurisdiction (BBNJ) negotiations in 2019. Step by step, SDG BSA is expanding its research focus, covering the SDG17 and SDG14 (Life below water) and, most recently, more on biodiversity, striving to make science have a bigger influence and policy impact. 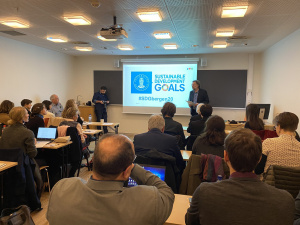 Indeed, the first SDG Bergen policy brief entitled “A sustainable Ocean: how the science community can contribute” is about to be published. Sverre Ole Drønen, SDG BSA Communications Adviser, featured policy briefs as an effective approach not only to provide science advice to policy makers, but also to stir interactions between science, policy and society through social media and raising the interest of media.

A look on the European science diplomacy

The workshop then focused on EU science diplomacy by inviting representatives from two H2020-funded consortia: “Inventing a shared Science Diplomacy for Europe (InsSciDe)” and S4D4C. First, Rasmus G Bertelsen, Professor in Political Sciences at the Arctic University of Norway, introduced the concept of science diplomacy showing practical examples of his experiences in COP summits and academic missions to Russia for Arctic research. He emphasised the value of science mobility within his own career having covered so many countries, such as Denmark, Iceland, Switzerland, Netherlands, UK, US, Norway and also the UN University in Yokohama/Japan. Bertelsen also referred to his interest in science diplomacy stemming from the differing approach between powerful and small-power nations in international relations and the key value of language education and scientific collaborations as foreign policy assets. Regarding science advice, he pointed out the challenges in addressing the right research answers to the appropriate policy questions in national and international settings, that may cause expert frustration and diplomatic gridlocks. Lastly, Rasmus introduced the approach of InsSciDe to undertake historical research on heritage, health, security, environment and space to reflect on past, present and future EU science diplomacy.

On behalf of S4D4C, Lorenzo Melchor, EU Science advice and diplomacy officer in the Spanish Foundation for Science and Technology (FECYT), took part in the event. His intervention revolved around three topics: (1) the knowledge, skills, and experiences required to work in science diplomacy; (2) the role of FECYT in helping to widen the Spanish foreign policy agenda to science, technology and innovation; and (3) the double orientation of S4D4C to research on empirical case studies and to influence policy-making via a wide range of outputs including policy briefs and reports describing the complex science diplomacy governance framework, the Madrid Declaration on Science Diplomacy to stir the national and European debates, and training programmes for researchers and practitioners to build up capacities based on trust, empathy and credibility. 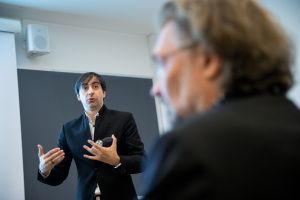 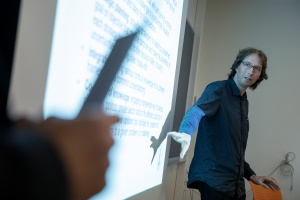 Lorenzo explained the multi-stakeholder nature of science diplomacy as it involves not only international organisations and nation states but also regions and large cities, the academic sector and learned societies, industry, NGOs, and civil society. Lorenzo also underscored that, to tackle global challenges such as climate change, water and food sustainability, global epidemics and others, there must be a mixture of technical solutions provided by research and innovation, with policy solutions implemented by diplomatic agreements among nations.

Lastly, two researchers from the University of Bergen further enriched the discussion. Jeroen van der Sluijs, Professor in Theory of Science, explained the main conclusions coming from the “Making sense of science for policy under conditions of complexity and uncertainty” report, written for the European Commission by a committee of 16 SAPEA (Science Advice for Policy by European Academies) experts, which he was part of.

Hakan G. Sicakkan, Professor in Comparative Politics, focused on how his research on mobility, belonging and participation in social patterns, the transnational political public space, and global migration and refugees may be of use for national governments, the EU, and the UN.

All panellists agreed on the need for a more strengthened science-policy nexus based on structured approaches and professional expertise from across all scientific disciplines. They all remarked that universities had a vast niche to exploit by linking their SDG-research outputs to the national, European and international policy-making setting.

S4D4C will be very pleased to provide support in this complex endeavour!