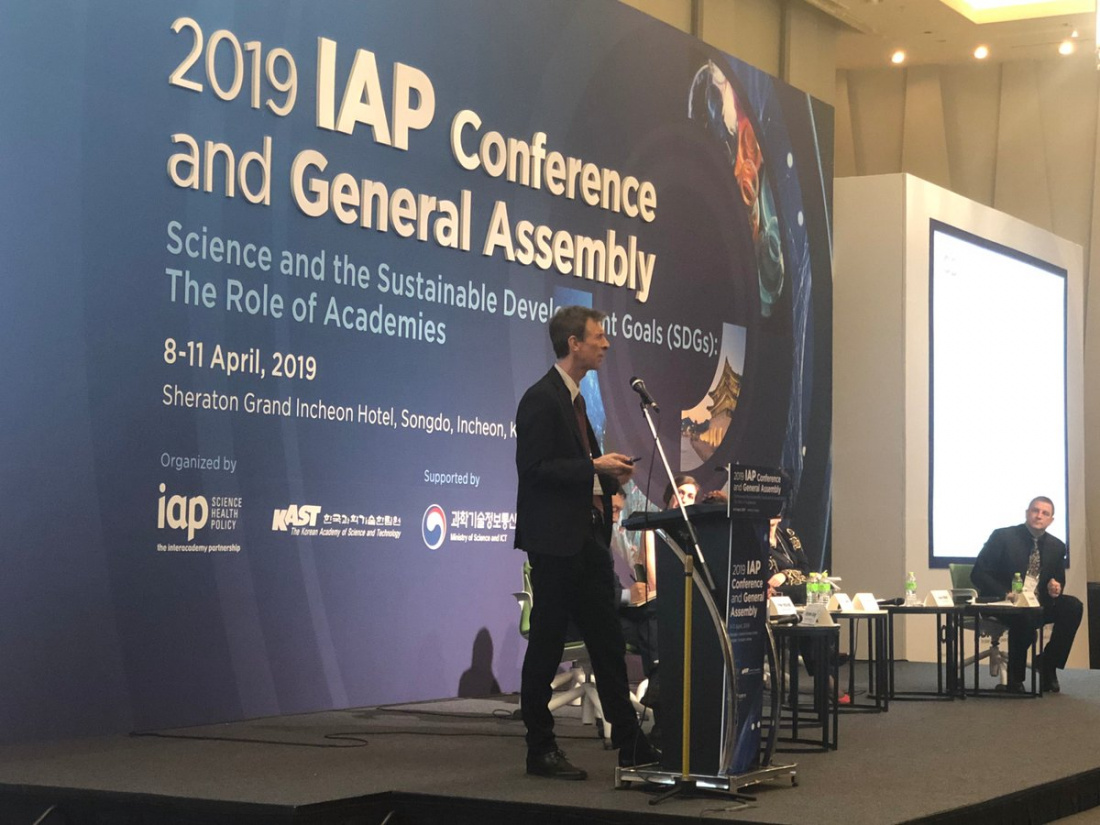 The InterAcademy Partnership, the global network of science, engineering and medical academies – and one of our S4D4C associated partners – has been calling policy practitioners and scientists to its 2019 conference “Science and the Sustainable Development Goals (SDGs): The Role of Academies”.

Nearly 200 leading scientists, policy practitioners, and delegates from some 60 science, health and engineering academies from around the world met at the two-day conference in Incheon, Korea from 9 to 10 of April with the vision for the world’s academies to play a vital role in ensuring that science serves society inclusively and equitably and underpins global sustainable development.

In this context, it was highlighted that “science diplomacy (both science advancing diplomacy and diplomacy advancing science) is essential in helping the science community to fulfil its responsibility” (Dr. William Colglazier, Editor-in-Chief of Science & Diplomacy and Senior Scholar in the Center for Science Diplomacy at the American Association for Advancement of Science (AAAS) and also speaker during S4D4C’s 1st global meeting in Madrid last December)

The conference explored how science can underpin and help to advance progress towards achieving the 17 goals of the United Nations (UN) Agenda 2030 (better known as the UN Sustainable Development goals), and in particular, what role academies and the scientific community at large can – and should – play towards achieving these goals. Among the specific sessions identified by the conference’s scientific committee, there are discussions on the role of academies in the 21st century and how academies have been, and should continue to evolve, to respond to today’s challenges and to strengthen evidence-informed policymaking at global, regional and national levels. In addition, there are also more specific sessions on artificial intelligence, food and nutrition security, and agriculture.

Follow the discussion on Twitter via @IAPartnership and #IAP2019, or on the website www.interacademies.org. Results of the conference and an upcoming report will feed into discussions on the UN STI Forum and high-level political fora.

Following the conference, IAP held its triennial General Assembly, on 11 April. The meeting, hosted by the Korean Academy of Science and Technology (KAST), brought together over 100 representatives of science academies from 54 countries as well as the four IAP regional networks and the Global Young Academy. This gathering marked changes to the composition of the IAP Steering Committee, the decision-making body regarding the strategic direction of IAP. New IAP Chairs include Dr. Cherry Murray, Member of the US National Academy of Sciences and the US National Academy of Engineering, and Dr. Peggy Hamburg, Foreign Secretary of the US National Academy of Medicine. Also, IAP welcomed several new members at this General Assembly.