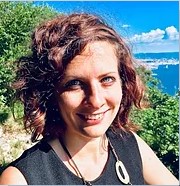 Sena Galazzi is Associate Programme Officer at The World Academy of Sciences (TWAS). She is also a PhD Candidate in Politics and International Studies at SOAS, University of London, where her doctoral research looks at relationships between international and local actors in Myanmar’s humanitarian sector. She holds an MA in International Law and a BA in Politics and Development Studies, both from the University of London. Before joining TWAS, Sena was for many years based in South East Asia, most recently in Myanmar where she designed and oversaw implementation of a new Migration and Development programme in the country’s highlands. There, Sena also co-founded a social enterprise focused on access to education for indigenous populations. Sena has worked in a variety of roles in research, project management/coordination, and advisory services, so far having served for organisations such as Amnesty International, the International Organisation for Migration, and the United Nations High Commissioner for Refugees, mostly in the United Kingdom, Myanmar, Thailand, and Malaysia, as well as a number of grassroots organisations on the Thai-Myanmar border.