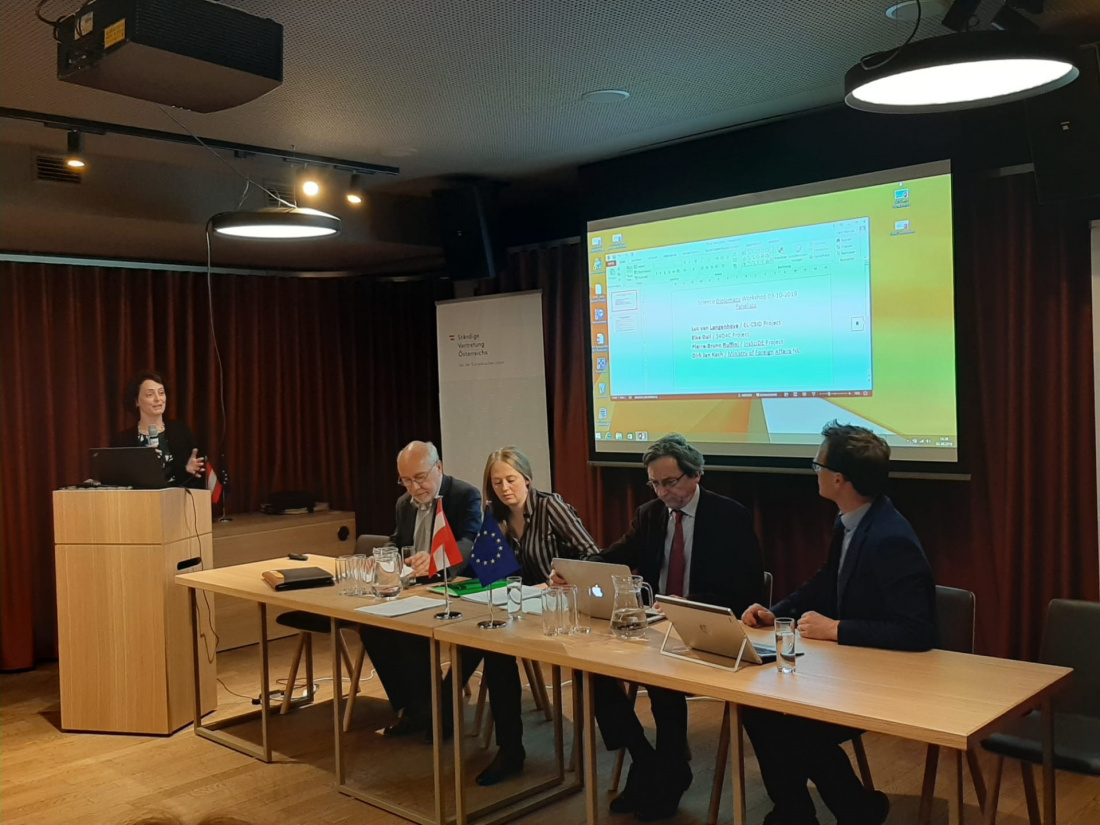 Elke Dall, on behalf of S4D4C, was invited together with other representatives of the Horizon 2020 science diplomacy cluster projects, to an event on science diplomacy organised by the Strategic Forum on International Cooperation (SFIC). The event took place in Brussels on October 3, 2019.

The Strategic Forum on International Cooperation is a dedicated platform of EU Member States established with the aim to facilitate the further development, implementation and monitoring of the international dimension of the European Research Area. This advisory group brings together representatives of the EU Commission and the Member States. It recently established a task force on “science diplomacy” seeking to provide strategic and timely advice from this particular point of view. The cluster of three ongoing and previous Horizon 2020 projects on science diplomacy – EL-CSID (represented through its coordinator Luk Van Langenhove), InsSciDE (represented through Pierre Bruno Ruffini) and S4D4C (represented through its coordinator Elke Dall) have been invited to discuss their projects in a workshop held by the task force.

Rozenn Saunier (FR) and Martina Hartl (AT) highlighted in their introduction several important aspects: the complexity of the topic, the variety of actors, the upcoming Horizon Europe as well as concrete projects on the ground with several regions. The aim of the workshop was to collect input for an 18 month work plan for the task force.

Cristina Russo (European Commission) addressed the group in a keynote. She referred to several examples to highlight the importance and power of science diplomacy for breaking down barriers:

After a successful session at the R&I Days on science diplomacy, further ideas are to be developed into new flagships – on top of the general international cooperation activities that are going to be planned for Horizon Europe. Pilot projects are already under way:

In the mission letter to the incoming Commissioner Mariya Gabriel as well as in her hearing with the EU Parliament, international cooperation was also highlighted as an important initiative.

Suvi Seppalainen (European External Action Service) confirmed the increased awareness of the EEAS to the topic with her new portfolio within the unit for Strategic Policy Planning. The impact that technology has on foreign and security policy is obvious to her, having worked in the United States for several years. She also observed a culture change in the headquarters where links to science are discussed increasingly, such as ethical aspects of technologies, 5G, climate change, Arctic, etc. The “Global Tech Panel” advising HR Mogherini played an important role in this respect. The incoming Commission also needs to be better attuned to the geopolitical consequences of scientific and technological developments. While this is not yet fully integrated in the work of the EEAS, Ms. Seppalainen aims to further promote this culture change to improve science advice and training, and also to use science for branding Europe as an active and dynamic part of the world that has lots to offer.

Bernhard Gawlik (JRC) shared experiences in water and sustainability diplomacy that he has gathered as a researcher at the Joint Research Center of the European Commission. Originating from the Euratom Treaty, the JRC itself, works across Europe channelling science to policy. It has a rich history of balancing the tensions that come up from global problems in need of local solutions, complex systems that need to be described with simple language, translating data into knowledge and knowledge into action. Based on the JRC project of “Renaissance 2.0”, Mr. Gawlik described how, in order to achieve sustainability goals, emotions and data can be presented better than by publishing papers. By linking knowledge to culture and arts, it is easier to reach out to citizens, to create the trust and mutual understanding needed to take the necessary decisions. Linking Technology with Awareness and Arts in order to bring it to People, Practitioners and Politics (TAP layers) eases the conversation. By emphasising the arts, cultural communalities, and local identities a lot of engagement is possible. He advocated to think supra-national and local, and to create networks of non-state actors, for example science centre networks can be seen as local science embassies. In the field of water, a lot of examples can be highlighted where diplomacy meets science: the UNEP World Water Alliance, the Urban Water Atlas for Europe, the ICPDR for the Danube River basin, the GWP-Med for the Mediterranean, or projects with the African Union or the city of Jerusalem. The JRC is open for the European stakeholders to be used as a platform.

The discussion highlighted the need to change the framing, that for example technology in foreign policy is not just an issue of arms and defence, but also has implications on human rights, migration, governance of the Arctic, etc. Also, the framings of both science (e.g. citizen science, etc.) and diplomacy (new actors doing diplomacy) are changing.

The representatives of the science diplomacy cluster (see above Luk Van Langenhove, Elke Dall, Pierre Bruno Ruffini) highlighted some of their results and current activities in the discussion with the participants, as well as Dirk Jan Koch, Chief Science Officer at the Ministry of Foreign Affairs in the Netherlands, for example:

In the following discussion, participants identified drivers and priorities for the SFIC task force on science diplomacy. In very lively and diverse workshops, the societal challenges, increased cross-sectoral cooperation, Horizon Europe and the upcoming instruments for international cooperation, the wider geopolitical developments and the role of scientific diaspora as well as RRI and ethics have been discussed. The aim of the sessions, led by Armela Dino (ES), Martina Hartl (AT), Axel Leisenberg (FR) and Ágota Dávid (HU) was to support the science diplomacy ambition, prepare recommendations for the actors and programmes and exchange information on what is going on. In summary, four main drivers for science diplomacy with relevance for SFIC were identified:

In addition the topics of responsible science and research (including ethics), as well as the role of the scientific diaspora and alumni in science diplomacy have been mentioned and have gained support by the participants.

Exploring how SFIC can contribute to support the European science diplomacy agenda, the following aspects were highlighted:

In her closing remarks, Halina Walasek (EC) highlighted the call for a science-driven science diplomacy and to be closer linked to general science advice (see publication Scientific Advice to European Policy in a Complex World). She also called for a nuanced definition of science diplomacy which distinguishes between science diplomacy and international cooperation and includes input from philosophy of science. Tiina Vihma-Purovaara (FI) highlighted the importance to carefully analyse the perspectives and attitudes of different actors, to see the drivers and hidden agendas and to come to a joint understanding of what is aimed at. A joint understanding on European level can create the impact needed on the global level and also make a difference for the people.