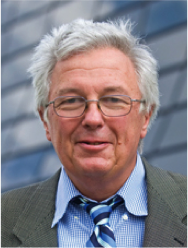 Wolfgang Eberhardt studied Physics in Giessen and Hamburg, where he graduated in 1978.He was a postdoc and Assistant professor at University of Pennsylvania and later joined EXXON Exxon Research and Eng. Co. In 1991 he was appointed director of the Institute ‘Electronic Properties’ at IFF Jülich and professor at Univ. of Cologne (Germany), in 2001 he was appointed as scientific director of BESSY in Berlin and professor at the TU Berlin. In 2003 he received an honorary PhD from Uppsala University. From 2009 to 2011 he was Director at HZB for ‘Energy Research’ and since 2011 he is at DESY-CFEL. In 2016 he retired from TU Berlin.

Wolfgang Eberhardt’s Research Areas are: Electronic structure of atoms, molecules, and solids determined by photoemission and synchrotron radiation related techniques; Development of angle resolved photoemission to study the bandstructure of solids, surfaces and interfaces; Electronic structure and magnetism of thin films and nanostructures; Fs- magnetization dynamics; Electronic properties and structure of clusters; Core electron excitation and dynamic screening processes in molecules and solids; Fs-2-photon-photoemission spectroscopy of clusters and solids; Scattering and holography with coherent synchrotron radiation. Energy Research, Renewable Energies, Photovoltaics. He co-authored about 370 publications and has an h-index of 68 (as of 2018) and was granted 3 patents