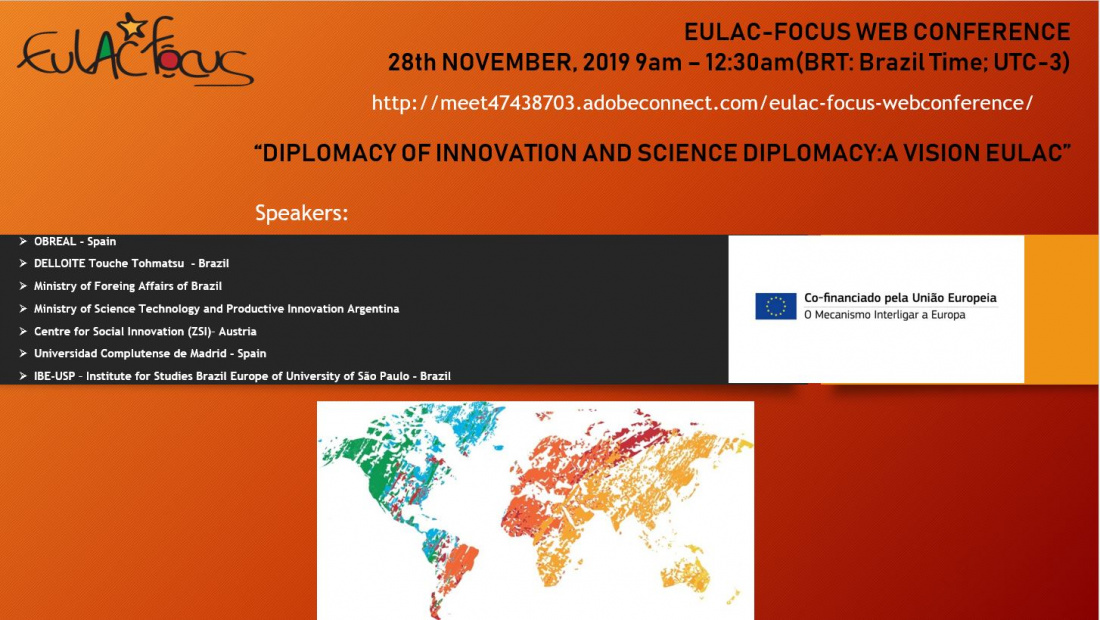 The EULAC Focus project organised a webinar on December 3, 2019 to which S4D4C was invited to discuss possible science diplomacy activities. The following report is a shortened version of the summary prepared by Gabriela Ferreira (University of São Paulo) on behalf of the EULAC Focus project.

Ramón Torrent (EULAC Focus coordinator) presented a general approach of the EULAC Focus project, which comprehends culture, science and social dimensions towards building a common vision and the development of new avenues for cooperation. In this sense, innovation and science diplomacy are encompassed by its analytical framework and are important tools to collaborate with diplomatic instruments, since they are limited in scope.
The first part of the meeting covered innovation diplomacy.
Marcia Matsubayashi (Deloitte Touche Tohmatsu) pointed out that the window to catch up and gain competitiveness in the digital economy is closing for some countries and more investments are needed. Her priorities are cross-border innovation, lower and fewer regulations, strengthened interaction between government, academia, and industry and new actors.
Pedro Ivo Silva (MRE-Brazil) stressed the difference between science and innovation (diplomacy) and in particular the intrinsic economic side of innovation – highlighting the need of focus on high-tech trade and R&D investment, international technology transfer, internationalisation of tech companies, capacity building and mobilisation of human capital, and partnerships between national and foreign companies and institutions. Furthermore, he presented InnSciD SP, the Innovation and Science Diplomacy School 2019, in the frame of which the São Paulo Framework of Innovation Diplomacy was created: a collaborative document that presents the specificities of the concept.
Luis Fernando presented Brazil’s focus on the establishment of a common language and goals between scientists, researchers, entrepreneurs and diplomats. One of the initiatives is the active participation in international innovation ecosystems – also by creating a network of Brazilian scientists abroad.
Myriam Moïse (Universities Caribbean) stressed the importance of the higher education sector in innovation diplomacy. She presented the Triple R Strategic Plan to the Caribbean countries: reputation, resilience and revenue, the main pillars of the academia contribution to the system. She also showed the importance of the establishment of priority areas, and presented the Caribbean Universities informed choice: energy and sustainable development; maritime tech; public health and tropical medicine; social mobility; gender and development studies; cultural memory.

In the part on “Science Diplomacy” Augustina Velo (Argentinian Ministry for Science and Technology) and Elke Dall (Centre for Social Innovation, S4D4C coordinator) gave aligned presentations. They highlighted science diplomacy as an important tool to address global/common challenges with science and diplomacy feeding into each other, creating an environment of collaboration. Therefore, it is crucial to foster the development of trust, common principles and a common language between scientists and diplomats – who are part of different bureaucracies – to collaborate in a bilateral or multilateral framework.
The Madrid Declaration on Science Diplomacy provides a sound framework which outlines the benefits and principles. Participants highlighted in an interactive questionnaire that collaboration and inclusions; capacity building and value added to citizens are of high importance and thus community building and networking; exchange, mobility and training materials are current needs. Several issues were also volunteered by participants in relation to potential science diplomacy flagships in order to strengthen the interplay between different sectors, specially industry, government and academia.

The event was concluded with an invitation to the “InnSciD SP 2020” school (see https://innscidsp.com) and the ongoing creation of a journal stemming from the 2019 event which also produced the “São Paulo Framework of Innovation Diplomacy”.