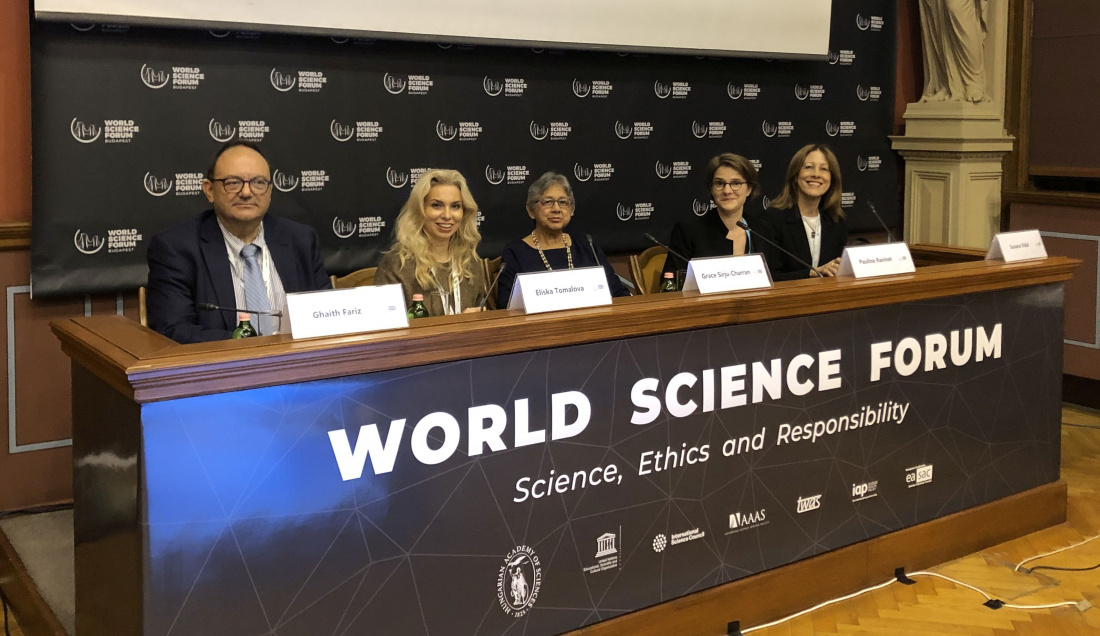 Several partners of the S4D4C consortium gathered in Budapest, Hungary, attending the World Science Forum (WSF) between 20 and 23 November 2019. Our partner Peter McGrath (The World Academy of Sciences TWAS / Inter Academy Partnership IAP) was busy in many sessions because of TWAS’ status as a co-organiser (together with UNESCO, International Science Council ISC, American Association of the Advancement of Science AAAS and European Academies Science Advisory Council EASAC). Several partners representing our empirical work package (WP3), led by Mitchell Young (Charles University), made presentations or were involved in the implementation of a focus group discussion (more below).

This 9th edition of the WSF celebrated “20 Years of Science Diplomacy”, as in 1999 UNESCO and 155 countries adopted a declaration which launched the follow-up conference series. Recurring keywords at this year’s WSF were integrity and responsibility, openness, transparency and ethical behaviour and in fact, several stakeholders organised thematic sessions or side events including “science diplomacy” in their titles (see our previous article).

Eliska Tomalova (Charles University) presented preliminary results of an S4D4C case study focused on water diplomacy and its innovative elements including multiple stakeholders being involved from early stages, the multi-dimensional approach used, as well as the analysis of multi-disciplinary, science-based oriented diplomacy. In the same session, Pauline Ravinet (University Lille) presented another S4D4C case study on science diplomacy related to food security in EU-Africa relations, discussing also the EU science diplomacy’s normative mission of projecting values (not just advancing interests), which seeks to make the EU a power with both capacity and responsibility for addressing global challenges. She highlighted that food security is a key challenge in the EU Global strategy. The presentations of the S4D4C case studies were thematically embedded among contributions from UNESCO: Ghaith Fariz (Director of the UNESCO Regional Office for Science in the Arab States) spoke about UNESCO’s activities on water security and suggested seeking solutions outside the “water box” with other mutually beneficial goals (socio-economical, environmental, and cultural) as major entry points. Grace Sirju-Charran (Vice Chair at COMEST/UNESCO) cited examples of the unintended negative consequences of science, technology and innovation stressing however that science was needed to achieve the SDGs, and although science for diplomacy is important for communicating scientific solutions, using normative frameworks, as exemplified in the declaration of ethical principles in relation to climate change, is a crucial element to go hand in hand with diplomacy in order to achieve the desired goals. Susanna Vidal (Social Science Programme Specialist at the UNESCO Regional Office in Montevideo) focused on the emergence of bioethics concerns at UNESCO, and highlighted the role of international, normative declarations in this field. At the end of the thematic session, Elke Dall (Centre for Social Innovation, S4D4C coordinator) called attention to the international normative frames and instruments (different “declarations” for example) and asked what makes them successful.

In the concluding session in the Hungarian House of Parliament S4D4C’s “Madrid Declaration on Science Diplomacy” gained further traction: It was mentioned as an eloquent common vision for the field by E. William Colglazier, Editor in Chief of the “Science and Diplomacy” Journal, in his keynote address. He further outlined what makes science diplomacy powerful (for example the capacity to strengthen competitiveness, negotiate the implications of rapidly advancing technology, to open channels of communications, spread values of objectivity, etc.) and the challenges that need to be addressed (such as nuclear proliferation, climate change or cyber-attacks).

Encouraging messages included the one by Elisa Reis (International Science Council) who highlighted the accomplishments of science in reducing barriers and advancing science diplomacy to attain the SDGs. She also described the ISC as being a result of “internal diplomacy” as it merged social sciences and all other sciences into a joint forum with many national and regional scientific associations through a kind of “science diplomacy within the science system”. Simge Davuclu’s (International Consortium of Research Staff Associations) account of science diplomacy in the last divided capital in Europe (Nicosia, Cyprus) provided the audience with positive visions related to the involvement of young generations in dialogues about science and technology to open up opportunities and building bridges: science overcomes borders.

An interesting side event was organised by SciTech Diplo Hub and moderated by Claire Mays from the InsSciDE project. It illustrated the recent trend of city-led science diplomacy. Participants were informed about different reasons for so-called global cities to add science diplomacy to their strategy: (1) the need to feed science into the international policy network formed by the UN and other intergovernmental agencies clustered in a city  (the case of Geneva, presented by Nicolas Seidler, Geneva Science-Policy Interface); (2) national actors are not close enough to the local pressures that cities experience due to climate change, making international outreach and scientific alliances on city level necessary (as illustrated by Frances Colón, representing Miami); or (3) a strong public-private partnership can showcase the excellence of the research and innovation ecosystems (such as the SciTech DiploHub created by Alexis Roig who represents Barcelona).

Peter McGrath (The World Academy of Sciences) also participated in a discussion session hosted by the Marie Skłodowska Curie Alumni Association (MCAA) on ‘Career Paths in Science Diplomacy’, where he expanded on the various opportunities for training in science diplomacy provided by TWAS and others, as well as highlighted the work of S4D4C.

In many side discussions and interviews, S4D4C partners took the opportunities to enlarge the network, spread the word about the project and inform about the possibilities of science diplomacy. The overall conclusions of the event, the “Declaration of the 9th World Science Forum – Science, Ethics and Responsibility“, promote the understanding that science contributes to global well-being, supports the development of standards in research integrity etc.

S4D4C focus group on the future of science diplomacy 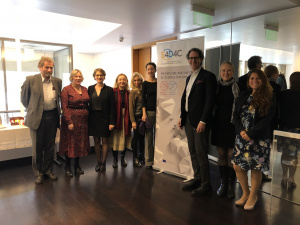 We started the discussion by asking participants to react to previously developed future scenarios of science diplomacy for global challenges – where are we and where will we go? These scenarios included an all-in multilateral world order; a reluctant but principled approach to address global challenges; a ‘lip service’ model where countries talk about global challenges but make little effort to address them, picking and choosing only the science that seems convenient; and a scenario of outright conflicts and contraction. These scenarios were fleshed out with a few additional descriptions to kick-start the discussion – of course being aware that there are many nuances and differences to consider in the different parts of the world. So, while we might be “somewhere in each model” it was interesting to reflect with the participants on the role of ‘countries’ as we described the scenarios and other important actors (social movements across borders, for example). New ways of interaction in general, e.g. the use of social media in the case of catastrophes, are also bringing in new actors, including citizen scientists. Furthermore, it depends on the discussed challenges: for example in relation to water issues, it is more likely that there will be water wars and scenarios of conflict and contraction coming true, while in inner and outer space, greater cooperation is needed and international organisations, networks and fora are playing important roles in “planetary management”.

Together with the focus group participants, we also reflected on the understanding of science diplomacy as a term – which is often disliked by scientists, as it seems to be politicising their work. One of the participants asked if the discourse is a way for the state to regain control over what scientists do? While most scientists are wary not to be manipulated or instrumentalised, there are still plenty of examples where science diplomacy has fruitful effects for the scientific efforts. There are also cases where scientists might be quite happy to propagate national interests, demonstrate their impact on society and answer the question “Whom do you work for?” with a reference to their country. Individual scientists are also often motivated by the wish to make a positive impact and to get out of the lab to share their knowledge with policy makers.

Many communities would also not use the phrase “science diplomacy” but still overlap in doing it. The best diplomacy might be the one that is unnoticed (e.g. reaching foreign audiences without being labelled). Some scientists “find themselves in the science diplomacy space” because of shifting national interests: several years ago, the academic US-China international cooperation activities remained under the national radar, whereas now the intelligence community and law enforcement have them under observation; in order to gain field access in suddenly contested geographical areas, foreign policy actors can be helpful; other examples were mentioned. Some actors are acting diplomatically in the frame of international initiatives without defining themselves as diplomatic actors – but because they are large and important, they have implications for the state where they are located (e.g. the Gates Foundation in global health). Looking at such initiatives is important and linked our discussions back to the theme of the World Science Forum: taking ethics into account is crucial when addressing global problems – which also might enable us to turn the phrase from “whom do you work for” to “what do you work for”. In this sense, also the understanding of the word “ambassador” can change – e.g. for Fulbright scholars representing national science (but not the government) which introduces a specific role of the funding organisation as an actor in science diplomacy through the organisation’s respective ambition.

We discussed also the importance of the social sciences and humanities (SSH) in these points. By definition, addressing grand challenges is a multidisciplinary endeavour and social sciences need to be involved – yet not as a “touch of it everywhere”. Rather they should be mainstreamed and additional to other disciplines. SSH, and in particular area studies, can provide a knowledge base on history, languages, political settings and how different communities work – which are also important aspects in science diplomacy.

The discussions in the focus group feed our current “Transversal Analysis, Synthesis and Scoping” activity – results will be available next year.