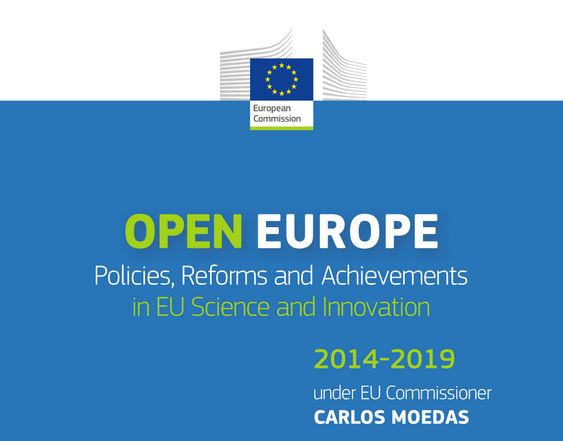 A recent publication of the European Commission (published on 23 September 2019) provides a comprehensive overview of what the European Union did for Research and Innovation (R&I) in the period of 2014-2019; and also highlights science diplomacy: “Open Europe. Policies, reforms and achievements in EU science and innovation 2014-2019 under EU Commissioner Carlos Moedas : open innovation, open science, open to the world”. Boosting international cooperation and science diplomacy was one of the key EC policy goals. The publication highlights achievements and explains the logic behind the main policies adopted by the EU as follows in our brief summary.

Stemming from the need to boost international cooperation in a world of closing borders, the EU increased the level of R&I cooperation and strengthened the background conditions for example in addressing regional and global challenges such as water management and climate change. The challenge to better explore the enormous potential of science diplomacy was stated clearly (see page 13): 1) R&I investment and cooperation beyond EU borders could constitute an effective framework to support developing countries on their way to growth (enabling capacity building, technology transfer, promoting reciprocal relations). 2) Science diplomacy could often be used as a tool to overcome political deadlocks and to unite actors in sensitive political contexts around major societal challenges.

Although the political climate for international cooperation is worsening, the benefit of a world where knowledge has no borders is clearly stated.

1) Tackling global challenges efficiently by ensuring openness of R&I projects to key international partners in order to prevent fragmentation of knowledge and promote cost-efficiency. To this end, legal and financial frameworks were improved and strategic partnerships and co-funding mechanisms were set up (such as PRIMA, the Partnership on Research and Innovation in the Mediterranean Area which was established in 2017 for 10 years with 19 participating states mobilising 22 million euro on sustainable food and water management; Belém Statement, a strategic partnership between the EU, South Africa and Brazil launched in 2017, focusing on the Atlantic Ocean; answers to the Zika epidemic).

2) Promoting global peace and strengthening EU external relations, harnessing the potential of science diplomacy to address conflicts and tensions in international politics (e.g. through the research infrastructure SESAME based in the Middle East, bringing together Cyprus, Egypt, Iran, Israel, Jordan, Pakistan, the Palestinian Authority and Turkey; Mission Innovation, a global initiative accelerating clean energy innovation), and to strengthen relations with neighbouring countries (e.g. through technical assistance and Horizon 2020 association agreements with Ukraine and Balkan countries). Cooperation on a global scale is illustrated for example by Zika-related research, where the EU co-funded five large-scale projects involving 119 partners from 58 countries. Another example is Arctic-related research, where the EU co-funded more than 45 Arctic-related projects, investing more than EUR 120 million.

Reflecting on the past five years, from 2014 to 2019, science diplomacy was boosted in order for it to become a key instrument of the EU’s foreign policy – for example by increasing the number of association agreements from 10 to 16, signing of 12 new ERC agreements, launching of 12 co-funding mechanisms. Overall, 124 non-EU countries have participated in Horizon 2020 projects, bringing talent to Europe from all around the world.

“Science diplomacy can be an effective tool for the EU to strengthen its role as a global actor and to promote world peace and development.” (page 71)

Science diplomacy was also in the discussions at the ministerial lunch in the frame of the Competitiveness Council on 27 September. Katri Kulmuni (Finnish Minister for Economic Affairs) and Carlos Moedas (Commissioner on Research and Innovation) outlined the discussions on the role of research and innovation in achieving climate targets and the contribution of Horizon Europe: R&I is crucial for creating and deploying new solutions and to promote climate neutrality, for improving the cost efficiency of existing climate-friendly solutions, for strengthening Europe’s competitiveness and for contributing to making this happen in a socially and environmentally sustainable manner. In this context, the importance of including climate endeavours in the future association agreements of Horizon Europe was stressed, making fully use of science diplomacy to involve other international actors in this fight against climate change (see recording of the press conference, min 3:30 and following).