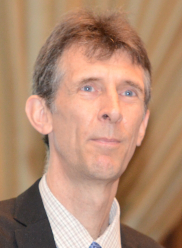 Dr Peter McGrath obtained his BSc (honours) in Agricultural Zoology from the University of Glasgow, UK, and his PhD from the University of Leeds, UK, in 1989. Following a 10-year research career, he worked as a freelance science journalist. He joined The World Academy of Sciences (TWAS) in Trieste, Italy, in 2003, initially in the Public Information Office. From 2006, Peter began overseeing the implementation of TWAS’s core programmes, including South-South fellowships, other exchange programmes, research grants and various prizes, as well as the activities of the Organization for Women in Science for the Developing World (OWSD). In 2011, he was also appointed Coordinator of the TWAS Science Policy/Science Diplomacy programme. In November 2013 he took over as Coordinator of the InterAcademy Partnership (IAP), a global network of academies of science and medicine that work together to provide independent expert advice on scientific, technological & health issues. Among his duties at IAP, he acts as Secretary to the IAP Science Education Programme’s Global Council. He also retains his position as Coordinator of the TWAS Science Policy/Science Diplomacy programme. As the S4D4C team member, Peter contributed to the training activities and participated in several events. Together with the TWAS team, Peter acted as the local host of the S4D4C science diplomacy workshop in October 2019 in Trieste. You can read an interview with Peter HERE, implemented in the frame of our “Researcher’s Voice” series.