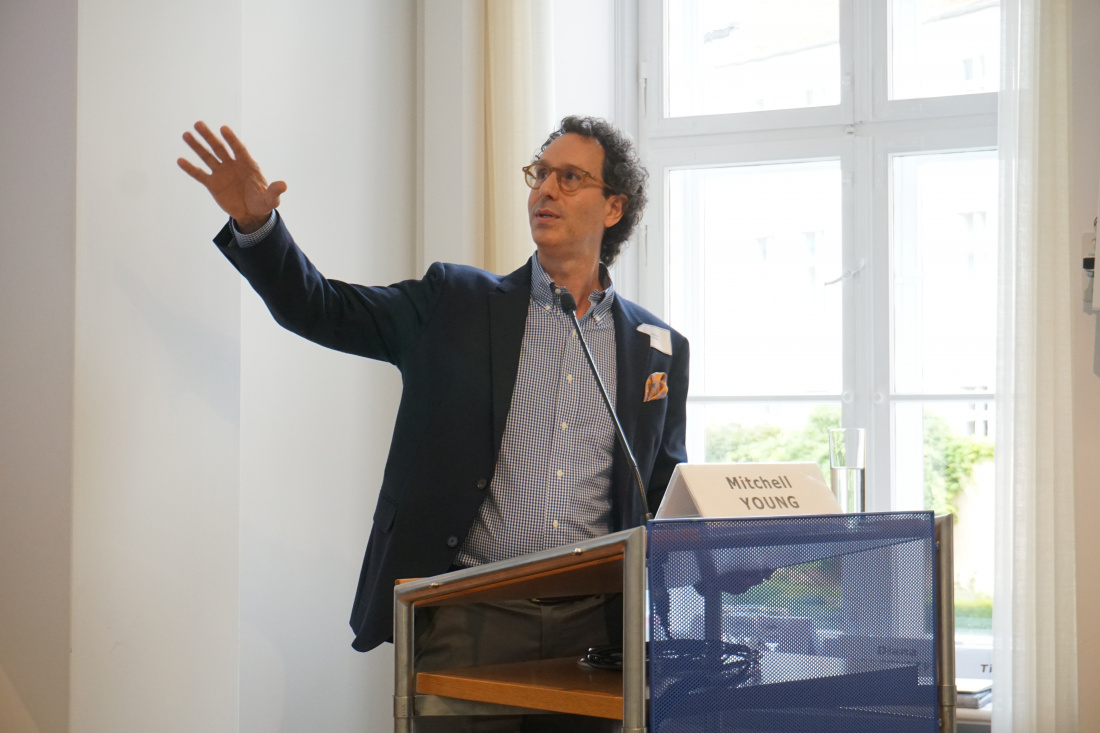 On the occasion of the publication of S4D4C’s latest project outcome “Science Diplomacy in the Making: Case-based insights from the S4D4C project”, we talk to Mitchell Young, assistant professor at Charles University in Prague, who was one of the original S4D4C project designers. He is the leader of the empirical work package of the project, and as such is also the leading editor behind this volume. Mitchell led its preparation from the very beginning and currently plans the further analysis of the findings.

Now that the case studies are all ready and published, could you give us a brief overview – when did the work on this volume start and what happened in between then and today?

The volume in many ways traces back to the original planning meeting we had for the project in 2016. That seems like ages ago, and I guess it is, but academic time is, perhaps unfortunately, structured that way. That we were able to hit on topics for the cases in this volume that are still highly relevant, and even increasingly so, is pleasing. As we talk now in the time of the COVID-19 lockdown, I’m thinking a lot about the infectious diseases case, but others, such as water management, cybersecurity, open science, and joint research programming, have also climbed their respective policy area agendas.

The research work for the volume began in June 2018 and the writing up early the following year. The cases were written by research teams across the consortium, which was logistically a bit more challenging than just having individuals do it, but in the end, more rewarding, I think. We had a number of team meetings in person, as well as quite a few videoconferences to pull this all together. We wanted the case teams to be able to explore broadly, and not be tied down to a strict structure or theoretical framework, but at the same time, we needed to ensure some measure of comparability. I think the result reflects that. This is not a traditional academic edited monograph, nor is it just a descriptive report on different science diplomacy topics, but rather something in between. In the preface to the volume, I called it an ‘empirically rich, descriptive incursion’ into a broad range of key issues in science diplomacy. These are primarily issues of governance, knowledge dynamics and policymaking.

The publication is titled “Science Diplomacy in the Making: Case-based insights from the S4D4C project” – In what way does this title reflect the nature of the case studies presented or the conclusions that could be drawn from the findings?

I would say that the title reflects the consensus of those in the project about where we are at this point in time with the concept and practice of science diplomacy. It is something that we are in the process of defining, making, constructing – choose your favourite word. Maybe I have been focusing too much on the coronavirus recently, but I think it is a good example of something that both clearly involves many aspects of what we call science diplomacy, while at the same time exposing how much we are still in the midst of developing this concept. Some practices are already institutionalised and adapting quickly, such the calls for and establishment of funding for research which has been done both in Horizon 2020 and on the national level; cooperative efforts to develop treatments and vaccines; the opening up of many journal paywalls and the use of preprint servers. Other aspects are still immature and developing before our eyes, such as the role and power of the WHO in coordinating pandemics, the issues of temporarily (re)establishing borders, and the role of science advice, which varies greatly from country to country, for example over the idea of ‘herd immunity’. On the other hand we see different national narratives – also I suppose cultural foundations – that lead to more- or less-strict policy approaches, though these appear to be converging on the belief that we need to ‘flatten the curve’.

Back to the title, I think that while we have helpful typologies, such as the Royal Society/AAAS’s, we still don’t have a uniform definition or a single theorisation of the concept. So, in the volume, we also want to reflect that science diplomacy refers to a number of different things that are not collapsible. This continues in our ongoing work on the transversal analysis of the cases, where we’re looking at about a dozen different aspects of what matters for science diplomacy.

What can we learn about science diplomacy from looking at these specific cases?

Building on what I was saying earlier, I think that we can clearly see that science diplomacy is increasingly important in today’s world, and for the global challenges we face.

Also, we see a bias towards the hard sciences in science diplomacy, and we need to be sure that the humanities and social sciences are not left out. There is untapped potential there. The infectious disease case makes some excellent points about this.

We see that traditional bureaucratic boundaries, or policy silos, still create frictions. This happens in the way that different ministries and directorate generals frame policy issues. The actor networks are complex and grounded in different underlying interests, narratives, logics and even values. We need better communication, coordination, and interfaces.

Finally, I might put forward a word of caution, that there is a danger of conceptual stretch. Science diplomacy is probably best understood as an umbrella concept, but still, it can’t encompass everything. It is important to pin down what counts as diplomacy or diplomatic activity. The term diplomacy itself is in flux and has vastly expanded its scope over the past decade or so, but even network-type diplomacy with a broad set of both governmental and non-governmental actors, has to have limits somewhere. There is a difference between doing diplomacy and merely acting diplomatically. The same issues hold for science diplomacy.

The case studies are divided into three broader categories – foreign policy driven, science driven and policy instruments driven cases. Could you explain a bit about the thought behind this distinction? How did you come up with this structure?

This goes back to the original project design and our interest in capturing a full range of the phenomenon of science diplomacy. In order to achieve this, we wanted to take an approach that was different from the Royal Society typology, but not in contradiction with it. So rather than practices or interests, we chose to look at drivers as a way to structure our work, but also as a way to ensure that we captured the breadth of what was being considered as science diplomacy. When we talk about foreign policy driven cases, we think about those issues areas that are already well established in foreign policy in which science plays a supporting role. There are many of these, but we chose to look at cybersecurity, water security, and infectious disease management. From the other end of the spectrum, we wanted to try to capture instances in which scientific development could push forward diplomatic efforts; these science driven cases, represented opportunities for science to take leadership. Here we looked at interfaces of policy and science in contexts where scientific funding and interests were predominant – food security, quantum physics, and open science. Finally, we wanted to look at some emerging instruments that we believed would play a coordinating role in science diplomacy, and these we call instrument driven cases. Here we find three types of instruments, large scientific infrastructures, joint programming, and science advice mechanisms. It’s important to note here that the drivers are not mutually exclusive – different drivers take on more or less importance at different phases of diplomatic interaction in each case.

What types of actors did the case authors work with or conducted interviews with in order to gather empirical evidence?

As this is now a major output of the S4D4C project – what’s the strategy to spread awareness about it? Is it forwarded to any target groups specifically and who is supposed to read it?

We’d like to get it out broadly, it’s up on our website, some papers servers, and we’ve been tweeting about it.

In terms of who should read it, I think that there are several groups and also several ways of reading it. As I mentioned earlier, it’s not written as a comprehensive narrative. I suppose most people would want to pick and choose the chapters or cases that interest them. It’s probably only very intent researchers who would want to pick it up and read through from start to finish.

The insights found in the individual cases should be valuable to both policymakers and researchers interested in those topics. Already the case on the SESAME research infrastructure has made it into a briefing by the German minister of education and research. I might also say here that we’ve also produced policy briefs for each of the cases, which highlight the main points on a single A4. Those are available also from our website.

As well, the volume could be read in a cross-cutting manner. The cases are divided into sections which address governance arrangements, stakeholder landscape and relations, governance practices, knowledge dynamics, multilevel governance, and the concept of science diplomacy itself, so a reader could just focus on particular sections of a sub-set of cases.

So you mentioned the current COVID-19 crisis earlier. The project team also had to cancel a meeting planned for the transversal analysis in Prague in mid-March and met online instead. How did that go?

Yes, we did have to move the planned meeting in Prague online. It’s not the same as hashing things out in person, but we did manage to delve into the analysis. I suppose we all need to get used to this online format, at least for a while. The idea now, as I mentioned earlier, is to draw out some findings and lessons that cut across the cases. The basic question we ask is, ‘what matters for science diplomacy?’ I’d be happy to talk again when we have more done on that.

Mitchell, thank you for talking to us!