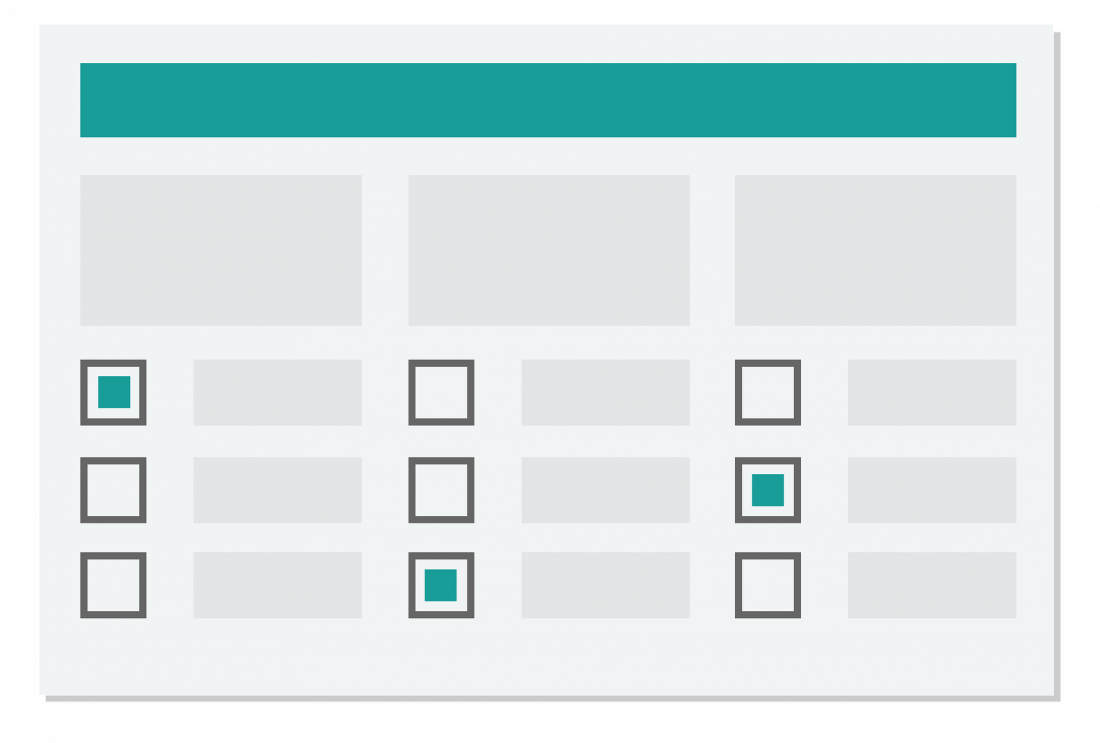 The S4D4C project is coming to an end and so we currently reflect a lot on our activities and impacts. In January, we also launched a “concluding survey” to collect information about our community and its understanding of science diplomacy as well as new data on the connection between science diplomacy and COVID-19. This survey was promoted via social media and mailings and accessible from our S4D4C Website from January 7 to February 21, 2021. We would like to thank everyone who shared their thoughts.

Who answered our questions?

189 people completed the survey. The number of EU- and Non-EU-participants is almost equally distributed among the respondents: 50.8% are located in EU Member States and 49. 2% from non-EU countries. Also, the breakdown by genders is rather equal: 46.6% are female, 50.3% male. Most of the respondents are mid-career level (47.6%), followed by senior-level or retired respondents (29.1%) and the smallest group are respondents in an early career stage (23.3%). There are some interesting aspects about the home countries: With 13.8%, the greatest proportion of our community comes from Spain. We have also been exceptionally successful to disseminate our survey in Colombia (7.9%). These numbers hint at the excellent outreach of our Spanish speaking partners at FECYT and that one of our colleagues, Gonzalo Ordóñez-Matamoros, is based in Colombia. Other considerable shares are respondents from Germany (6.3%), Austria (5.8%), France (5.3%) and Italy (4.8%) – also countries where one or more of our project partners are based.

“Science diplomats” in our community

Almost half of the respondents consider themselves explicitly as ‘science diplomats’ when asked to assess themselves – and 50.8% reacted neutral or negative. This shows that we reached a very specific group which is important to know when further evaluating the answers.

Strategic approaches to Science Diplomacy in the respective home countries

Respondents from the EU-Member States believe more often that their home country has a strategic approach to science diplomacy than citizens of non-EU-member countries: 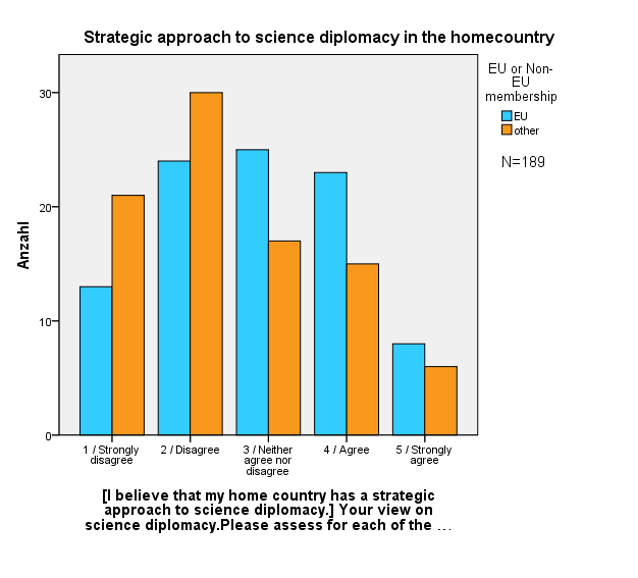 The importance of non-governmental stakeholders and the SSH 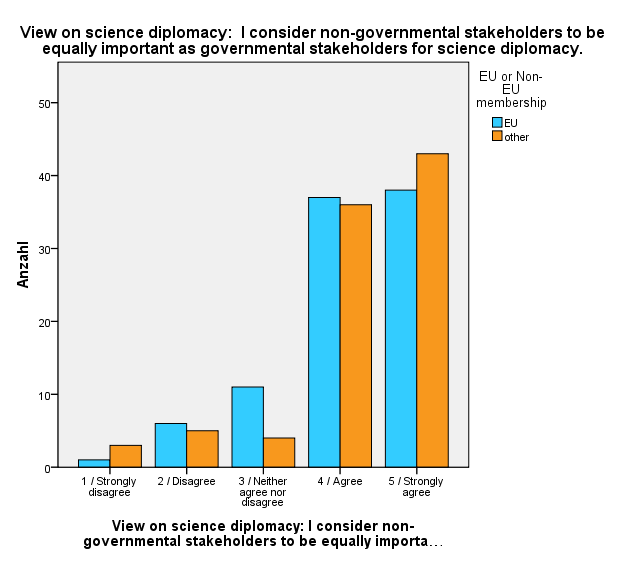 We also asked our respondents if they agree that social sciences and humanities play an equally important role and received a quite overwhelmingly positive response (more than 88% agree or strongly agree). 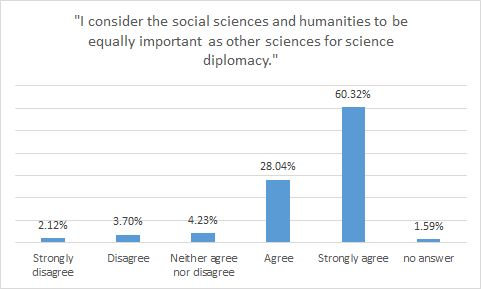 What has changed in the past three years?

In general, our respondents believe science diplomacy was strengthened in different areas. The following are the five statements where most often improvements were diagnosed:

Science diplomacy and the COVID-19 crisis 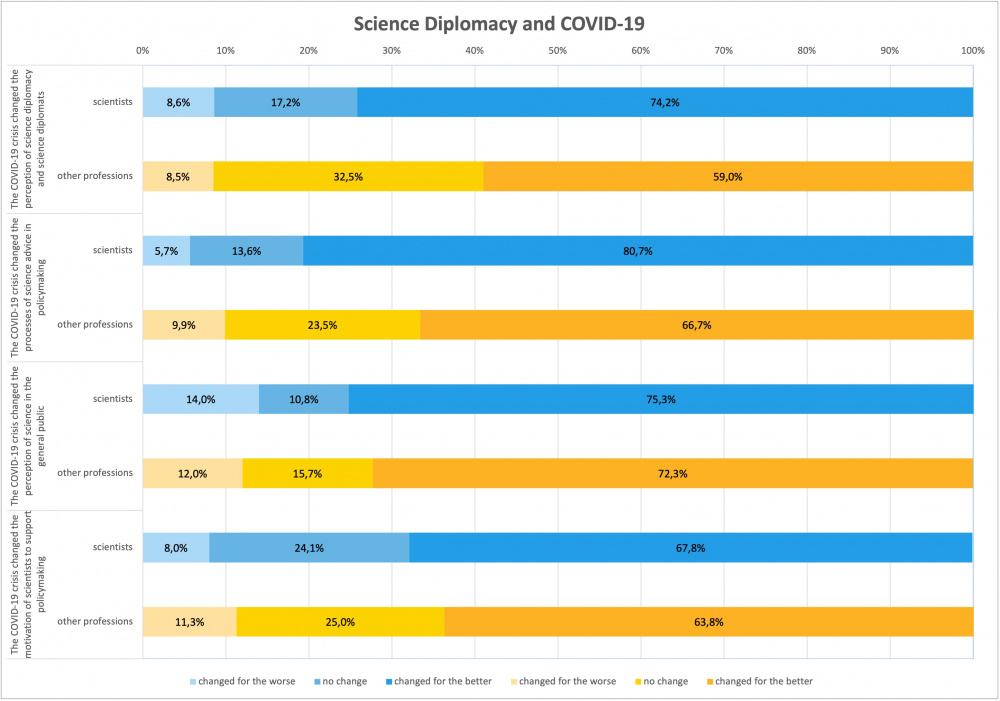 Recommendations for the science diplomacy community

Last but not least, we asked about concrete recommendations for the science diplomacy community and the highest-ranked are the following:

Once again, we would like to thank everyone who took part in this poll which was not part of the research project but helped us with input to several tasks, such as the organisation of several sessions at the final conference (e.g. the one on COVID-19), the launch of the EU Science Diplomacy Alliance and which areas to focus on as well as the project’s impact assessment report.