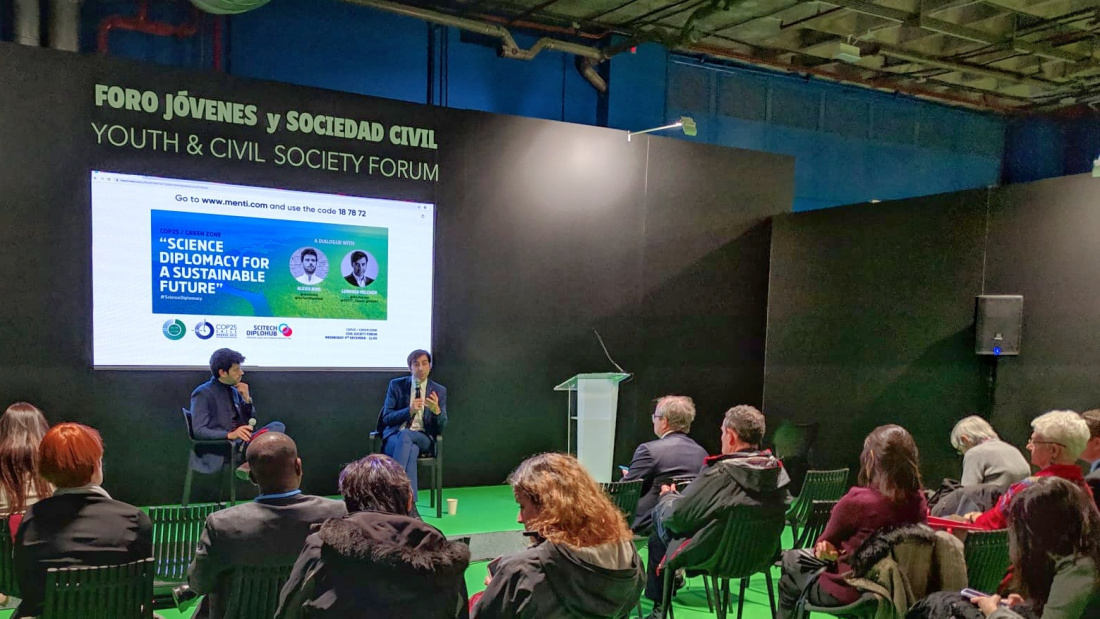 On December 4, the session debate “Science diplomacy for a sustainable future” was held in the Green Zone of the COP25 (United Nations Framework Convention on Climate Change, 25th Conference of the Parties) in Madrid. S4D4C participated in the session with our partner Lorenzo Melchor, Spanish Foundation for Science and Technology (FECYT), who discussed with Alexis Roig, CEO of the Barcelona SciTech DiploHub, about the concept of science diplomacy and its relationships with global challenges and a sustainable future within the general framework of the COP25 Chile-Madrid. In this brief exchange with the public, S4D4C and the Barcelona SciTech DiploHub helped to trigger a discussion around science diplomacy in the context of the most important conference related to climate change.

To a diverse audience of embassy representatives, delegates of international organisations, scientists and students, both speakers introduced the concept of science diplomacy and its growing importance in the current globalised world. Roig highlighted the different dimensions of science diplomacy: from a collaborative approach to build up scientific partnerships among nations around global or regional challenges, to a soft-power nation asset to increase global influence.

Both practitioners also discussed the different stakeholders involved in science diplomacy. Melchor explained that “all levels of government—from supranational governments such as the European Union to nation states and even global cities can be active stakeholders in science diplomacy. However, the current international relationship landscape gives also a growing role to other non-state actors such as international organisations, industry, NGOs, and above all, in science diplomacy, the role of the scientific community and scientific institutions is of utter importance”.

When asked about the European Union, the S4D4C representative stated that “the EU has taken the flag of global championship for science diplomacy with the strong commitment of former Commissioner Carlos Moedas and his ‘Open to the World’ policies. Indeed, a cluster of science diplomacy projects, which S4D4C is part of, has been funded and several initiatives have been implemented to fund international research projects around challenges in sensitive regions such as the PRIMA initiative in the Mediterranean”. Melchor also talked about S4D4C as a “diverse partnership among science diplomacy scholars and practitioners that aims to understand global and European science diplomacy governance models and practices to provide better advice to the European Union policy makers and diplomats to improve their coordinated action, that carries out research on specific case studies that will help to understand the current state-of-the-art, and that nurtures an EU science diplomacy practitioner community through conferences, workshops, introductory schemes and online trainings – building up capacities and networking opportunities”.

Roig expanded the information about the role of global cities in science diplomacy explaining the role of his initiative, the Barcelona SciTech DiploHub: “In 2018, the Barcelona STI ecosystem came together to launch a comprehensive diplomatic strategy to put the city’s science and technology at the service of citizens from around the world and tackle challenges like climate change. We foster exchange among scientists, tech experts, and decision makers to bring science back to the heart of intellectual and policy debates in public policy, including climate action”.

They both agreed that climate diplomacy and COP25 Chile-Madrid are both “paramount examples of science diplomacy”. Melchor further explained that “a panel of international experts in climate change providing advice to global leaders, policy makers and diplomats who reach global agreements around policy implementation is an outstanding example and that this can be and is translated to other global challenges such as global health, food security, cybersecurity, etc.”. Roig also gave some examples of policy actions to tackle climate change undertaken by global cities and discussed that “research and innovation in cities have a direct impact on resilience and sustainability well beyond urban boundaries. Cities are most effective at taking measures to tackle climate change when aligned with each other”. 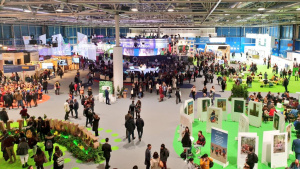