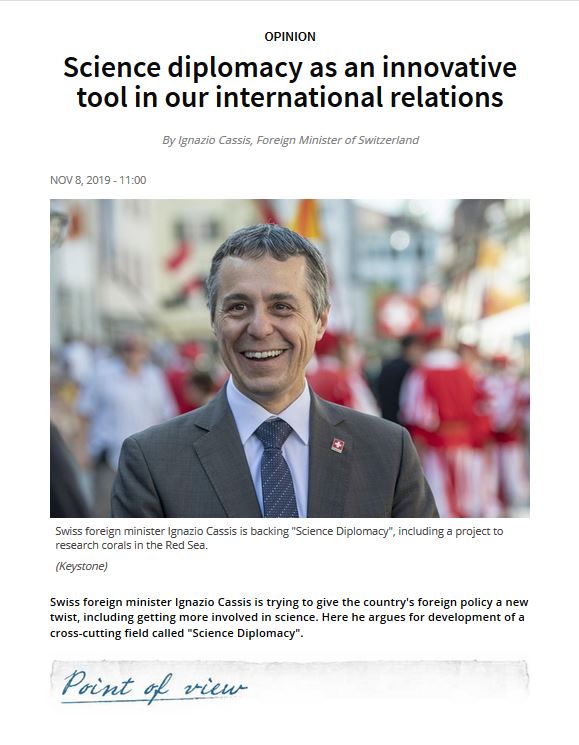 Recently, the Declaration reached the awareness of Ignazio Cassis, Foreign Minister of Switzerland who published an article originally on November 4 in Le Temps – in English translation published on November 8 as an op-ed article at swissinfo.ch: https://www.swissinfo.ch/eng/politics/swiss-foreign-minister-op-ed_science-diplomacy-as-an-innovative-tool-in-our-international-relations/45354504 where he argues for the development and mainstreaming of Science Diplomacy as a cross-cutting field included in a new vision for Swiss foreign policy. In his articles he explains the term by referencing the Madrid Declaration:

This term has been coined in the 21st century. It encompasses both “diplomacy for science” and “science for diplomacy” as well as “science that informs diplomatic choices”. Since last February, science diplomacy has had a charter, the “Madrid Declaration on Science Diplomacy“, which places science at the heart of the range of diplomatic tools and establishes principles to strengthen collaboration between these two worlds.

Refering to the Comprehensive Nuclear-Test Ban-Treaty (CTBT) or the creation of a “Transnational Red Sea Research Centre” in the Gulf of Aqaba (described in more detail here – also referencing the Madrid Declaration!) as two examples combining science and diplomacy he also explains the mission of the  “Geneva Science and Diplomacy Anticipator” Foundation, which aims to encourage further exchange and to propose concrete solutions as to how the global community can best respond to future developments and their impacts on society (see here).