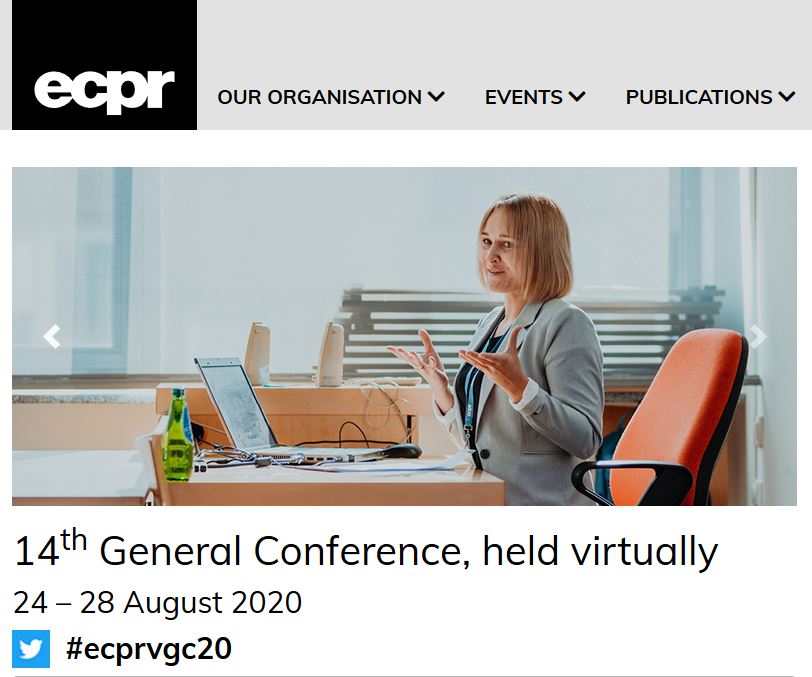 Our S4D4C partner Mitchell Young (Charles University Prague) organised a panel at the general conference of the European Consortium For Political Research (ECPR) on August 28, 9.00-10.45 CET. It is part of the section on Knowledge Politics and Policies. The conference started on August 24 and provides an insight into a wide range of topics in political sciences.

Science Diplomacy is gaining traction as both an academic concept and a term of practice in foreign policy. This panel will focus on global challenges as unique sites of science diplomacy which demand engagement by scientists, diplomats, and policymakers and politicians on multiple levels. Papers in this panel may choose to focus on a single global challenge or approach them comparatively in terms of their multi-actor and multi-level governance dimensions.

Global Challenges are becoming ever more central to the EU’s foreign policy objectives. The EU’s New Global Strategy (2019-2024) states that, “The EU will use its influence to lead the response to global challenges.” We ask in this paper: How? What gives the EU the capacity to act regarding global challenges? On what basis does the EU’s influence and potential for leadership rest? The Europe-as-a-power debates identify two main sources from which European power is derived: one, the single market (the Market Power Europe approach), and two, the attractiveness of Europe’s norms and values (the Normative Power Europe approach). In this paper, we show that both approaches are lacking when it comes to explaining how the EU has engaged with global challenges to exert leadership and influence on a global level. Building on our previous research showing that knowledge is a missing element in European foreign policy discourses, we look specifically at climate change and food security to see how knowledge is mobilized as power within global challenges. The climate change case is a most-likely scenario, where the EU has taken a leadership role, whereas the food security case is an example where the science is still fraught and the policy approach divided between the EU, US, China and Brazil. These contrasting cases, drawing on data collected in the Horizon 2020 project S4D4C (Using Science in/for Diplomacy for Addressing Global Challenges), provide insight into the mechanisms, practices and interests involved in the EU’s attempts to develop its foreign policy through the knowledge-intensive global governance objects of climate change and food security.

Lack of harmonisation of regulations is a major hurdle for the commercialisation of biotechnology products globally. This has resulted in an environment where non-tariff barriers, lack of evidence-based policy change, misinformed public dialogue and expensive uptake of technology has prevailed; all of which are contributing to food insecurity. Science diplomacy is the use of scientific interactions among nations and stakeholders to address the common problems facing humanity and to build constructive, knowledge-based international partnerships. Current international regulatory structure through the Cartagena Protocol is not fit-for-purpose in addressing new biotechnologies such as genome editing. Science diplomacy is one such conceptual framework which evolves the growing relevance of the intersection of science, technology and foreign policy. Furthermore, there is a lack of interdisciplinary approaches to inform policy on regulation of biotechnology.
This study explores mechanisms to involve diverse stakeholders in an evidence-driven discourse for biotechnology products. Science diplomacy as a novel interdisciplinary platform for capacity building in science policy will equip researchers, industry, farmers, state entities and organisations in Australia and globally to future proof technologies such as genome editing. This study has also generated a negotiation simulation as a science communication toolkit which can be used globally and will create a cohesive engagement on the scientific, political and economic dimensions of biotechnology regulation through role-play simulations. Pre- and post-simulation surveys of different sets of audiences has empirically shown that there was an uptake of knowledge as well as positive correlation between the simulation and communication of bio-technologies.

Goals, Actors and Governance of Science Diplomacy: the Case of Science and Innovation Centers by Elisabeth Epping, University of Luxembourg

This paper responds to the growing interest in science diplomacy (SD) as an academic concept (Flink & Rüffin, 2019; Kaltofen, Acuto, & Blackstock, 2018; Ruffini, 2017), a potential new paradigm to public policy and a practice in foreign policy (Fähnrich, 2015). Given that the academic scholarship on SD is still in its infancy and the discourse on SD is normatively coloured, this paper offers an empirical study of SD that draws on novel evidence. To this end, a comparative analysis of an instance in practice, i.e. an instrument of SD is conducted. Three aspects deserve closer attention: 1) to extract the goals and motivations linked to SD, 2) to identify the actors of SD and 3) to disentangle the governance arrangements of SD.
In response, Science and Innovation Centers (SIC), a novel and unique instrument on their own, are selected as instances of practice. SIC are distinct units, or satellite institutes, established by governments abroad, operating at the nexus of higher education, research, innovation, and diplomacy. Several countries among which are Denmark, Germany, the United Kingdom and Switzerland, to name a few, have already installed SIC. However, SIC in themselves remain academically under-researched and largely unexplored (Berg, 2010; Epping, 2018; Rüffin, 2018). The uniqueness and novelty of the SIC lays for instance in their organizational set-up and their holistic approach. SIC respond to calls for global excellence and are situated in the logics of competition and cooperation (Powell, Baker, & Fernandez, 2017). However, they differ from other instruments given, for instance, their explicit links to foreign policy goals (Epping, 2019; Rüffin, 2018).
A comparative analysis of two regional cases, Germany and Switzerland, will be conducted drawing on a combination of more than 40 interviews with key stakeholders and document analysis. Doing so will generate solid evidence on the goals and motivations, the actor structures and governance arrangements of SIC and hence SD. Accordingly, this paper contributes to the literature in a dual way: firstly, it enriches the scholarly understanding of the emerging concept of SD and secondly, it offers first hand insights on SIC, a unique policy instrument that is increasingly adopted by highly innovative countries.

The Promotion of European Studies in China. A Case of European Soft Diplomacy? by Silvana Tarlea, University of Basel

The European Union and China trade more than 1 billion euros daily. In order to consolidate relations with China, the European Union has been providing research funding to Chinese research institutions and universities through various channels, notably through the Jean Monnet programs and through the EU-China Innovation cooperation. But does the EU with its efforts of promoting European studies in China gain a political advantage over China? To which extent are European efforts of promoting soft power in China effective? This paper relies on interviews with Chinese academics in the field of European studies and on stocktaking of European studies programs in the country to assess this question. The findings will have relevance for scholars of European studies and will contribute to the growing literature on soft diplomacy.

The conference brought together more than 70 sections of panels and papers, more than 2.000 participants are expected and many of them might be interesting to the S4D4C community … to name just a few that cought our eyes:

If you want to be kept informed of S4D4C news, press subscribe!