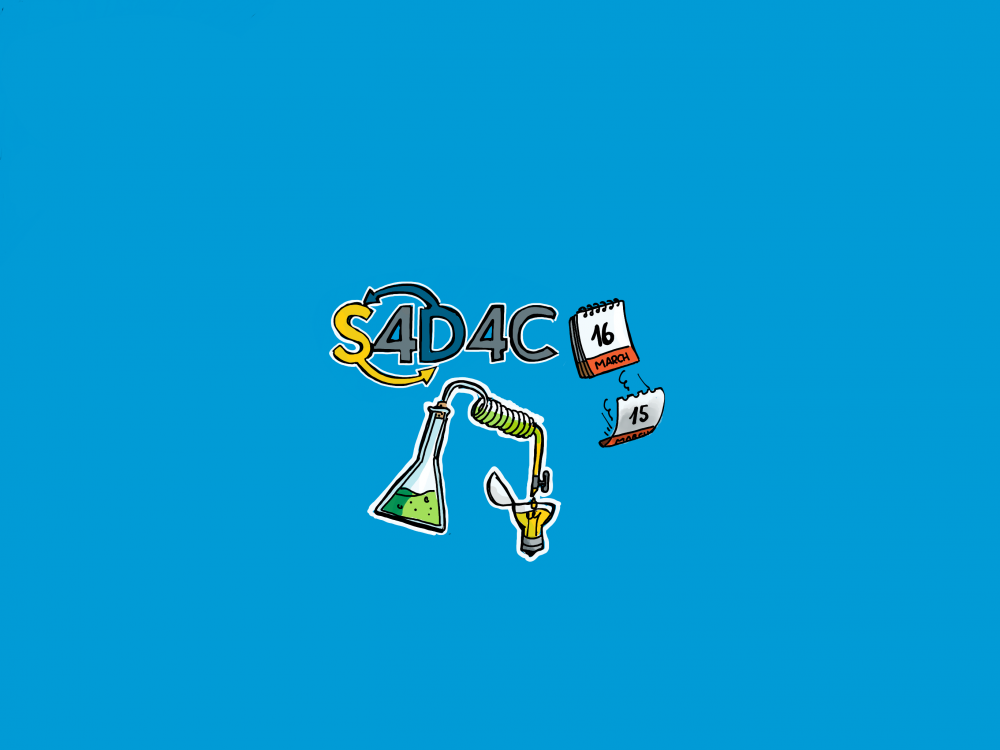 Between 10.30 and 12.00 CET participants could choose between the following sessions (n.b. parallel sessions have not been recorded):

1. “Addressing Global Challenges Under Multipolarity: Science Diplomacy and Strategy” which was organised by our sister project Inventing a shared Science Diplomacy for Europe (InsSciDE). Rasmus G. Bertelsen moderated four panellists who address historically-informed examples. Laurence Badel is a professor of Economics at University Paris I, Björn Fägersten works at the Swedish Institute of International Affairs, Maria Rentetzi is currently based at the Friedrich-Alexander University Erlangen-Nuremberg Faculty of Humanities, Social Sciences and Theology and Pierre-Bruno Ruffini joins from France, University of Le Havre-Normandie. The full description of the session is available on InsSciDE’s website here.

2. “Arts4Sciences4Cultural Diplomacy 2030” brings science, politics and arts into contact, with a particular emphasis on bringing in civil society. Tatjana Christelbauer from the Agency for Cultural Diplomacy addressed the topic with her panellists Boris Petrović-Njegoš, from Rocket Labs Unlimited, Susanne Keppler-Schlesinger, Vienna School of International Studies (and also S4D4C partner) and Lamberto Zannier, President of the Centre for International Negotiation and Mediation at the University of Gorizia, Italy.

At 13.00 the conference programme was opened by Elke Dall, S4D4C project coordinator and a statement by Minister Anja Karliczek (German Federal Ministry of Education and Research):

The conference continued with a panel round table moderated by Elke Dall who invited a set of speakers who are in some ways responsible for science diplomacy in their national governments – Carole Mundell, as Chief International Science Envoy at the Foreign Commonwealth and Development Office (FCDO), United Kingdom, Daan du Toit, Deputy Director-General, International Cooperation and Resources, Department for Science and Innovation, South Africa, Dirk-Jan Koch, Chief Science Officer, Ministry of Foreign Affairs, the Netherlands and Stefan Estermann, Ambassador and Head of the Division Prosperity and Sustainability, Ministry of Foreign Affairs, Switzerland.

The panelists discussed what works in their country in terms of SD: 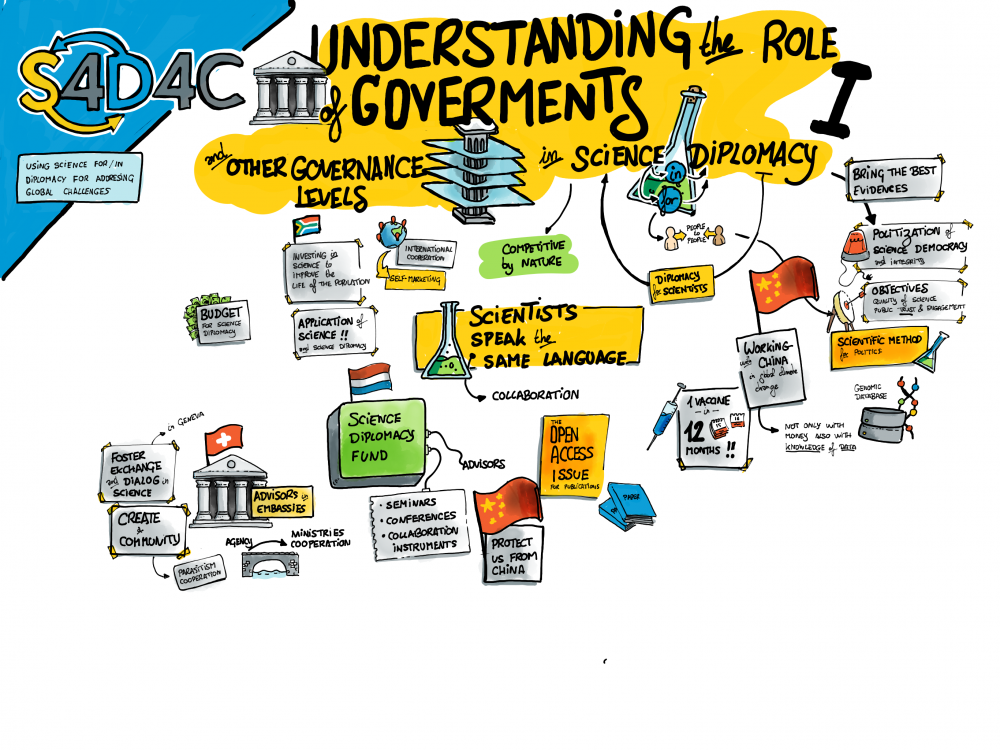 Then our S4D4C colleagues presented results related to the governance of science diplomacy: Nadia Meyer moderated a discussion between Ewert J. Aukes and Lorenzo Melchor who presented the idea of how to create interactive spaces for science diplomacy.

S4D4C ON THE SPOTLIGHT: “The Governance of Science Diplomacy”

The Madrid Declaration stresses that science diplomacy spaces are useful to address global challenges instead of national needs raising the importance of STI at different levels of international affairs.

This Science Diplomacy Protocol outlines a set of twelve procedural and infrastructural principles that need to be considered to create transformative science diplomacy interactions.

S4D4C also published the policy report entitled “Calling for a Systemic Change: Towards a European Union Science Diplomacy for Addressing Global Challenges”. Lorenzo Melchor explained that the document aimed to develop a basis of common understanding across the EU and the rest of the European stakeholders of EU science diplomacy that contributes to addressing global challenges. The report was the result of the insights shared during the two first S4D4C international networking meetings in Madrid and Berlin, and the research and reflections made by S4D4C in our academic and policy publications over these last few years.

Lorenzo stressed the set of policy recommendations focused on an integrative transformation and that takes into account three transversal processes (learning system, integrative leadership and change of culture) in five key spheres: knowledge, governance with no silos, alliances, institutions, and people.

Nadia Meyer concluded that we cannot afford to come back to our old model and that a more systematic way to approach science diplomacy is needed. The slides used in the session are available here: S4D4C_Spotlight_Governance_Framwork. 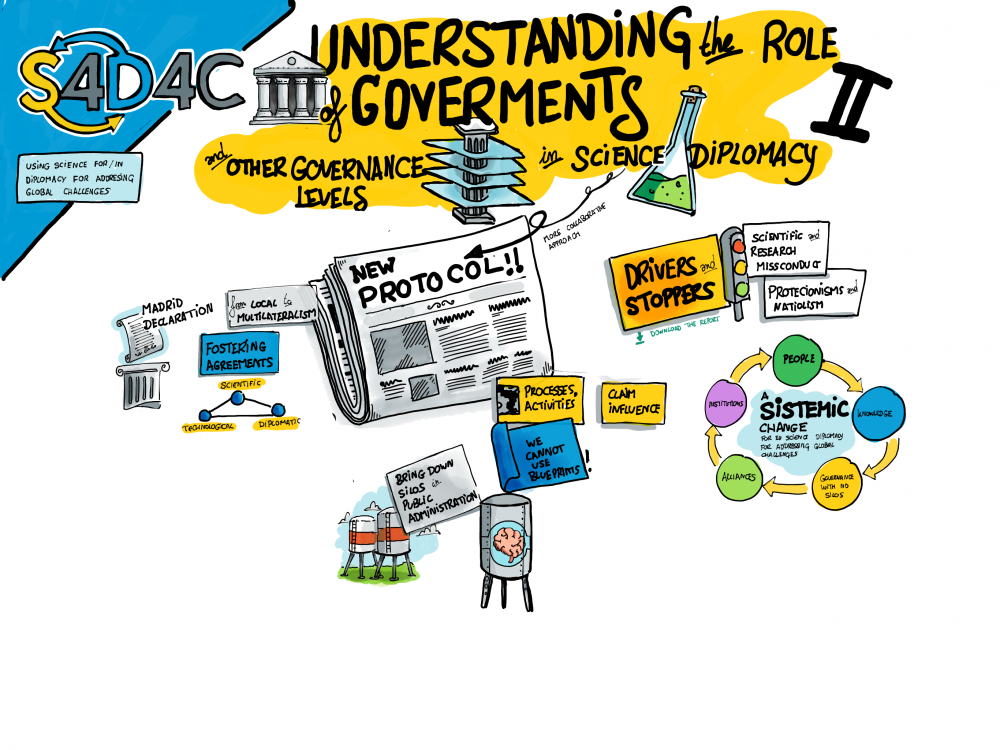 Izaskun Lacunza stressed that global challenges are extremely complex and cannot be faced in isolation, they require strengthened collaborations and new ways to align efforts and create shared missions across governments at different levels, government´s departments and other stakeholders. For science diplomacy to flourish and unveil its full potential, this governance with no silos is of the essence so that the scientific and the diplomatic communities can work together.

Izaskun underlined specifically the importance of a joint approach for addressing global challenges in which not only governments but public opinion, companies, research institutions and the third sector, among others, need to converge.

Taking the glove from the previous panel, Izaskun asked the tree panellist to reflect on whether governance was even needed to address global challenges.

Daria Robinson thought we should create a flexible and adaptable model that is inclusive. The question is how.

Martin Rauchbauer believed that the mantra in Silicon Valley is new tech is creating new market places and that governments should not interfere. However when problems arrive companies do not want to be left alone. A multi-stakeholder approach is gaining force, and some companies are claiming that a regulatory framework is in fact needed.

Abdul Hamid Zakri was asked how to promote this multi-stakeholder approach and dialogue. In his view, you need to start nationally (national academies, universities, scientific foundations, etc.) to provide scientific advice to the government and the administration (encouraging science advisors in the different sectoral departments).

Daria Robinson stated that the problem is when countries do not have such mechanisms in place. We need to bring the science community (not just the science content) to the table in the decision making.

In GESDA, we look at science diplomacy from the other way around. Instead of looking at the problem and then finding the expertise, we first look at the science and then we identify what can this technology solve and look for the right people to intervene. The challenge comes along with technology and we have to deal with them.

Abdul Hamid Zakri stated that the scientific community is a key player in this governance framework. But they need champions in the community to connect with politicians.

Izaskun asked the panellists about what should be the values that would need to operate in a science diplomacy governance for global challenges and how could these values be agreed upon and shared by different stakeholders from all over the world.

Martin Rauchbauer stressed that one of the key challenges is what digital transformation is doing to our society, challenging the meaning of human being. We need to address and come up with a framework that is based on humanistic values that put human beings at the centre of technology. A humanistic approach is needed.

Abdul Hamid Zakri advocated to consider the value of indigenous knowledge and to work in order to make the science policy-relevant. Scientists must therefore break their silos and connect better to society. Only breaking these silos you became a great scientist.

Izaskun Lacunza insisted that all of the speakers had vast experience in interacting not only with governments but with other key stakeholders such as companies, big techs, industry and, of course, the scientific community. The question is how these stakeholders are contributing to science (and technology) diplomacy governance and, in general, global governance.

For Daria Robinson, this question is very much linked to the expectations of each of the players and their mindset. GESDA is working on a methodology to bring the right stakeholders at the table well equipped to have a sustainable solution. It is really like a recipe!

Abdul Hamid Zakri finished raising awareness for the lack of global south scientists in most organizations and science diplomacy processes. 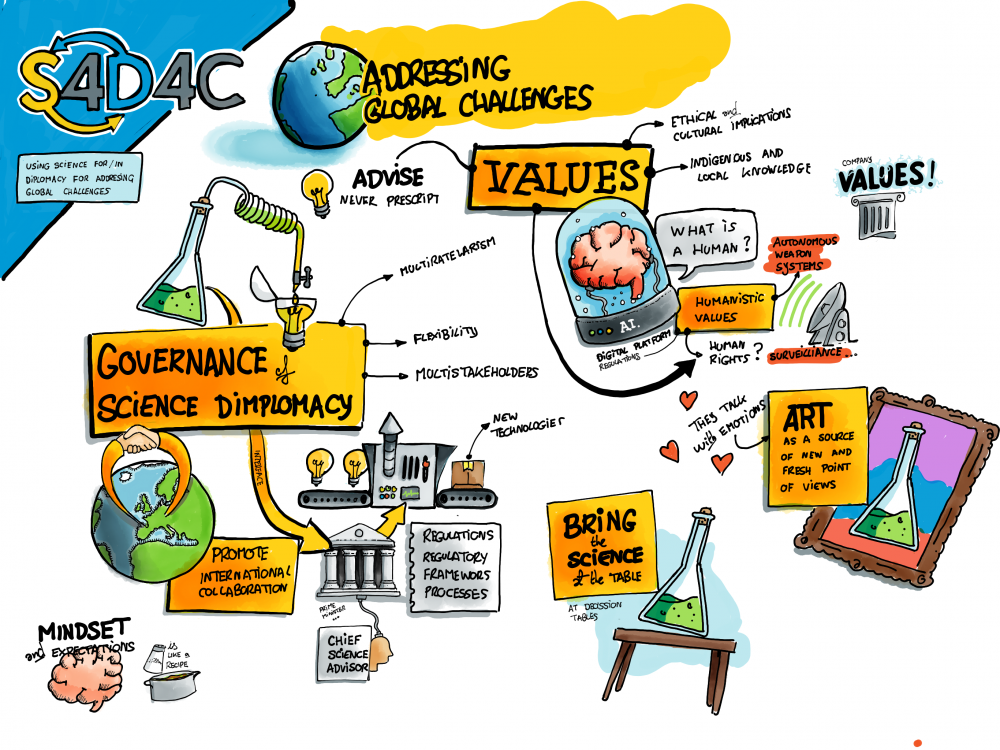 Between 16.00 and 17.30 CET three more parallel sessions offered thematic, regional and theoretical approaches (n.b. these sessions have not been recorded):

1. The workshop “Environment and Sustainability: Improved Communication For Solving Global Challenges” in the frame of the S4D4C Final Networking Meeting took place on behalf of the German Federal Ministry of Education and Research. In this session our colleague Maria Josten discussed together Anna-Katharina Hornidge, German Development Institute, R. Andreas Kraemer, Ecologic Institute in Washington DC, US, Jan Marco Müller, European External Action Service (EEAS), Jacob Rhyner, Bonn Alliance for Sustainability Research and Melanie Virtue, UNEP had the opportunity to actively exchange on success stories, major challenges and recommendations for future actions. In the following a few key statements of the panellists:

Science diplomacy in and for the Western Balkans Agenda

Radenka Krsmanović Whiffen is the founding Chair of the Western Balkans Chapter of the Marie Curie Alumni Association (MCAA). She talked about her role experience with the MCAA fellowship which brings entails to:
Sinisa Marcic, Expert on Human Capital Development at the Regional Cooperation Council
expressed that:

Klaus Schuch, scientific director and senior scientist at ZSI (Centre for Social Innovation), is currently involved in a foresight exercise and a study on supporting academic mobility in the region. He shared with us the key learnings from thess exercises:

Goran Stojanovic, Full Professor, Faculty of Technical Sciences from the University of Novi Sad (UNS) described his experience in participating in Twinning projects under Horizon 2020.

The Theory of Science Diplomacy

At the end of the day, Izaskun Lacunza, Laure-Anne Plumhans and Salomé Kofler brought us together in a social hour, meeting some old friends and seeing interesting new partners with whom to link up.