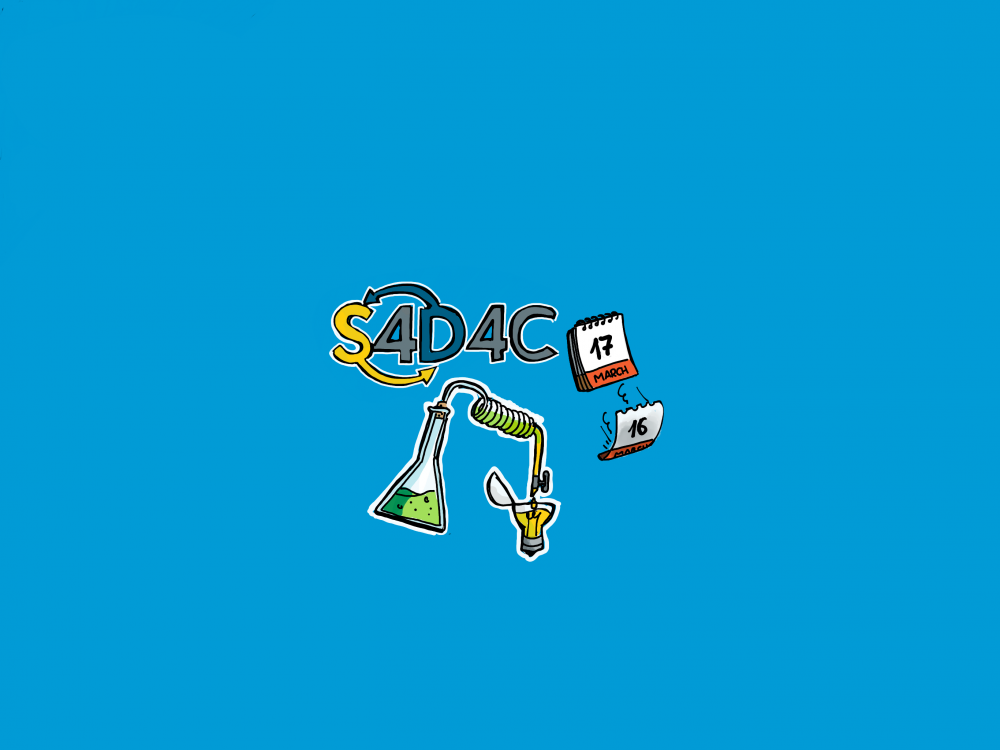 Wednesday started again with a block of parallel sessions (not recorded) from 10.30-12.00 (CET) which are organised by our S4D4C partners:

2. The German Ministry for Education and Research and the Project Management Agency at the German Aerospace Center organised the discussion on “Open Science: Joint Efforts for a Better Future“. Here, Nadia Meyer from DLR-PT, the S4D4C partner, brings together Katja Mayer, University of Vienna and Centre for Social Innovation (also S4D4C partner) as well as Lutz Möller, German Commission for UNESCO, Katharina Höne, DiploFoundation and Jean-Claude Burgelman, Free University of Brussels. Here are a few key messages from the panelists:

3. The third parallel option addressed a thematic priority and was entitled “Water Diplomacy: Intersection of Diplomacy and Science“. It is organised and chaired by one of our colleagues from Charles University Prague: Eliška Černovská. She discusses with Panagiotis Balabanis, DG Research and Innovation, European Commission, Marco Orlando, Partnership for Research and Innovation in the Mediterranean Area (PRIMA) and Bernd Gawlik, Joint Research Centre (JRC) of the European Commission.
Here are the main takeaways from the session:
The plenary at 13.00 was opened by the S4D4C coordinator Elke Dall and a statement by Minister Mabel Torres of Colombia:
The following round table was chaired by our partner James Wilsdon from the University of Sheffield dealing with “Multilateral Science Diplomacy: the Changing Role of International Organisations in Addressing Global Challenges”. He exchanged with Lidia Brito, UNESCO Regional Bureau for Sciences in Latin America and the Caribbean, and Albert van Jaarsveld, International Institute for Applied Systems Analysis (IIASA) – with Mohammed Hassan, The World Academy of Sciences (TWAS) unfortunately having connection problems from Khartoum.
In this session, the panel discussed the role of intergovernmental organisations in science diplomacy. Speaking from UNESCO Lidia Brito reminded us that science diplomacy was part of the original mandate of UNESCO in its creation in 1945. She advocated for the positive power of science and that science diplomacy is for everyone, not only diplomats and scientists. She stressed that the co-production of knowledge is fundamental, urging communities to work together to address global challenges, particularly through education and the sharing of research knowledge for all. Albert van Jaarsveld spoke about fostering a shared perspective across nation-states. He envisioned an alternative post-Covid future where we can live more sustainably in a world better equipped to deal with global challenges. Both speakers foregrounded cooperation, education and resilience as key features of future success in science diplomacy. 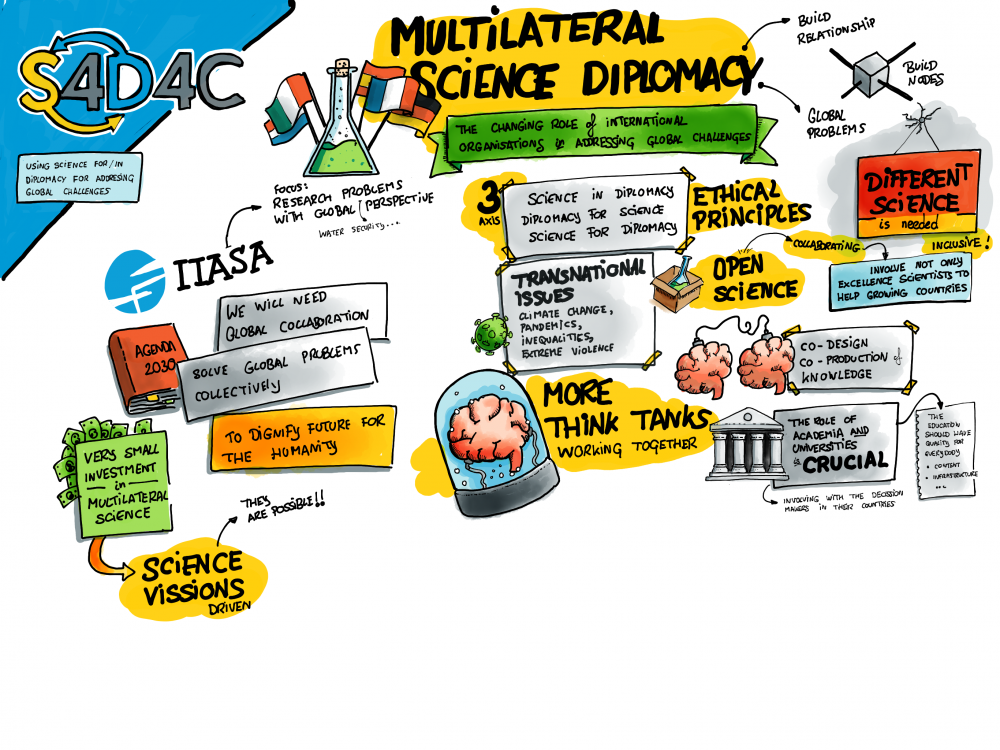 S4D4C ON THE SPOTLIGHT: “S4D4C Impact and Alliances” was brought to us by Pauline Ravinet (University of Lille) as chair, Nadia Meyer, DLR-PT and Laure-Anne Plumhans, Centre for Social Innovation (ZSI), Austria. They highlighted the project’s outreach activities which reached stakeholders all around the globe with regional specifities e.g. in Latin America or the Mediterranean region. Available data also demonstrates that the SD community the project was able to build reached a variety of actors and stakeholders, scientists with various backgrounds and diplomats, policy makers and administrators – young and old. Their presentation is available here: S4D4C_Spotlight_Impact-Alliances. 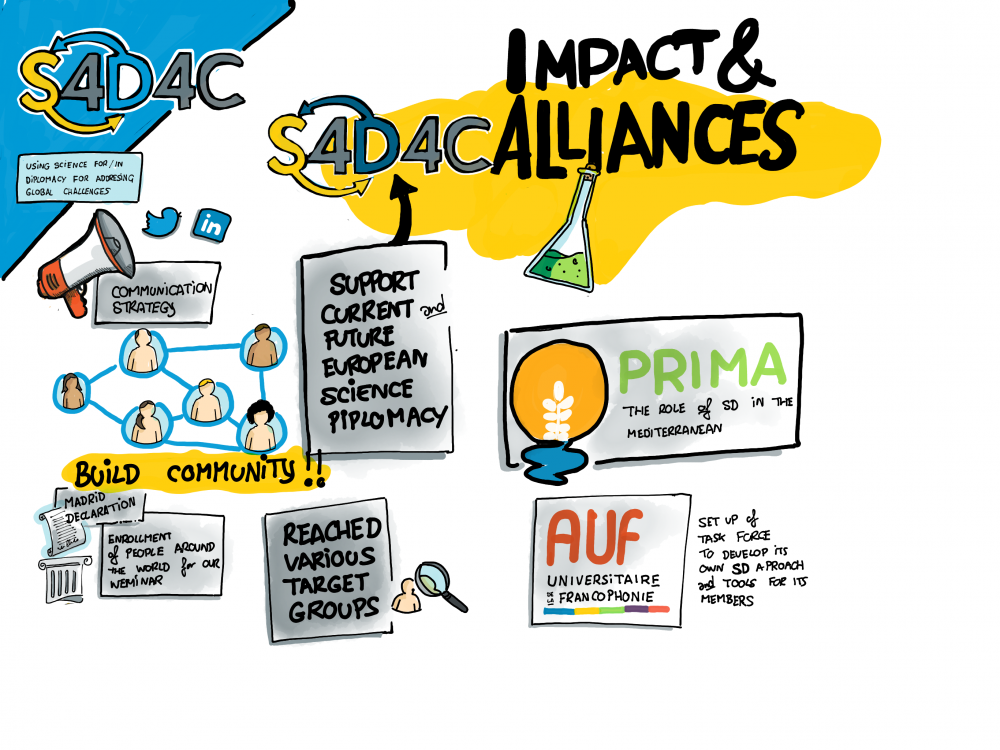 At 14.30, they handed over to Mitchell Young, Charles University for a panel round table focusing on “Building alliances to tackle COVID-19”. This panel was composed of  Ok Pannenborg, (formerly) World Bank, Annelies Wilder-Smith, London School of Hygiene and Tropical Medicine (UK) and Roger A. Pielke, University of Colorado Boulder. 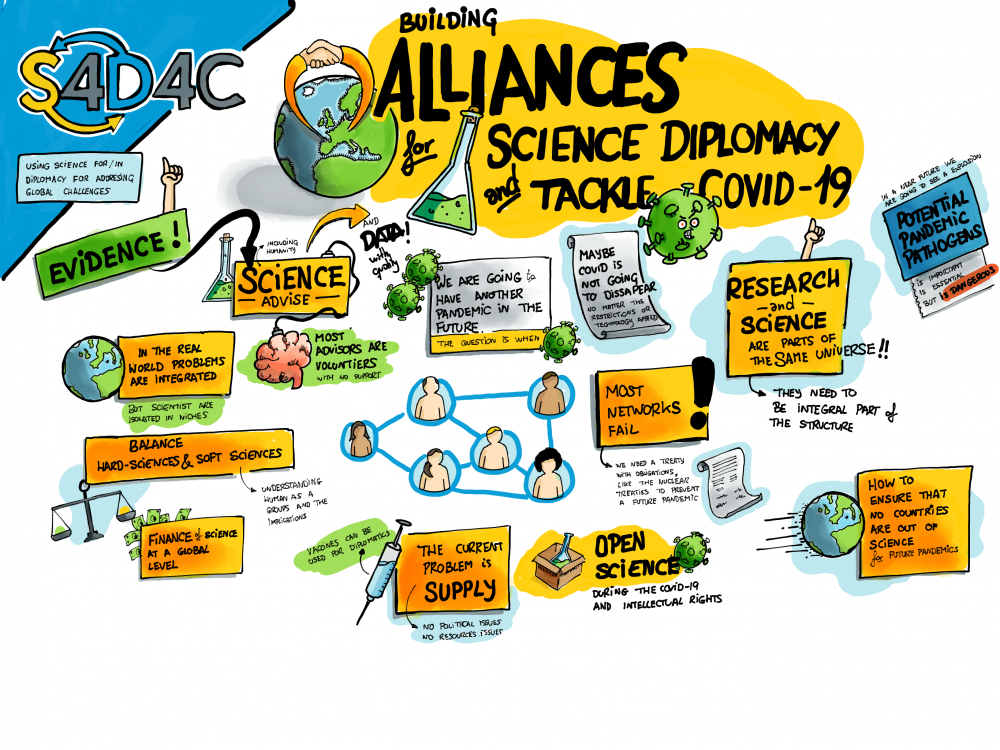 3. Another high-level session invited us to delve into “The Future of EU – Canada Cooperation in Horizon Europe“. Martina Desole from the Agency for the Promotion of European Research, as a chair discussed with Diogo Sammaritano, Directorate-General for Research and Innovation, European Commission, Ted Hewitt, President of the Social Sciences and Humanities Research Council of Canada (SSHRC), Marc Fortin, Vice-President of Research Partnerships, Natural Sciences and Engineering Research Council of Canada (NSERC) and Christian Sylvain, Associate Vice-President, Government and External Relations, Canadian Institutes of Health Research (CIHR).
The parallel sessions concluded the programme for Wednesday.