What was the programme on the first day?!

We started at 13.00 CET with a short opening ceremony for the S4D4C Final Networking Meeting “Addressing Global Challenges Together: the Role of Science Diplomacy”. Elke Dall, the project coordinator, and Cecilia Cabello, representing the Spanish Foundation for Science and Technology as local host, welcomed all attendees.

In her opening presentation, Elke provided a few key figures about the project: DAY 1 – Opening presentation_Elke Dall_final_ which was implemented for 3 years and 4 months (ending April 2021) with 10 partners. She highlighted the 9 case studies, 10 “matters” stemming from the transversal analysis, 14 key conceptual and policy papers (so far), 37 training outputs which benefited at least 6000 interested trainees from more than 100 countries. Elke also highlighted the more than 55 speaking opportunities at events with cooperation partners and the three networking events the project organised. She also mentioned that by March 2021, the project website has seen more than 230.000 visitors and recorded 28.222 downloads of materials. The interest is also confirmed by 3.100+ twitter followers (follow us too!) and 1.500+ members of the LinkedIn Group on “EU Science Diplomacy” (join here).

In particular, we are proud of the intervention by EU-Commissioner Mariya Gabriel who addressed the conference and complimented our results: 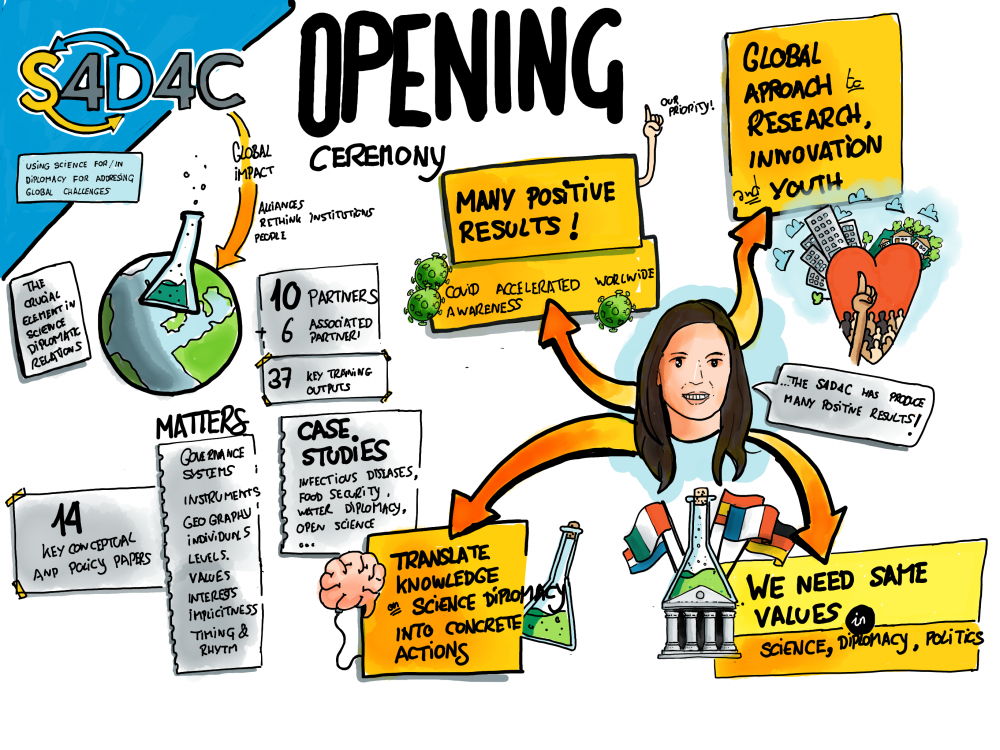 We then go into a few more details about the position of the European Commission, DG Research and Innovation, hearing three keynote interventions with the audience being invited to submit questions forwarded to the speakers for discussion. 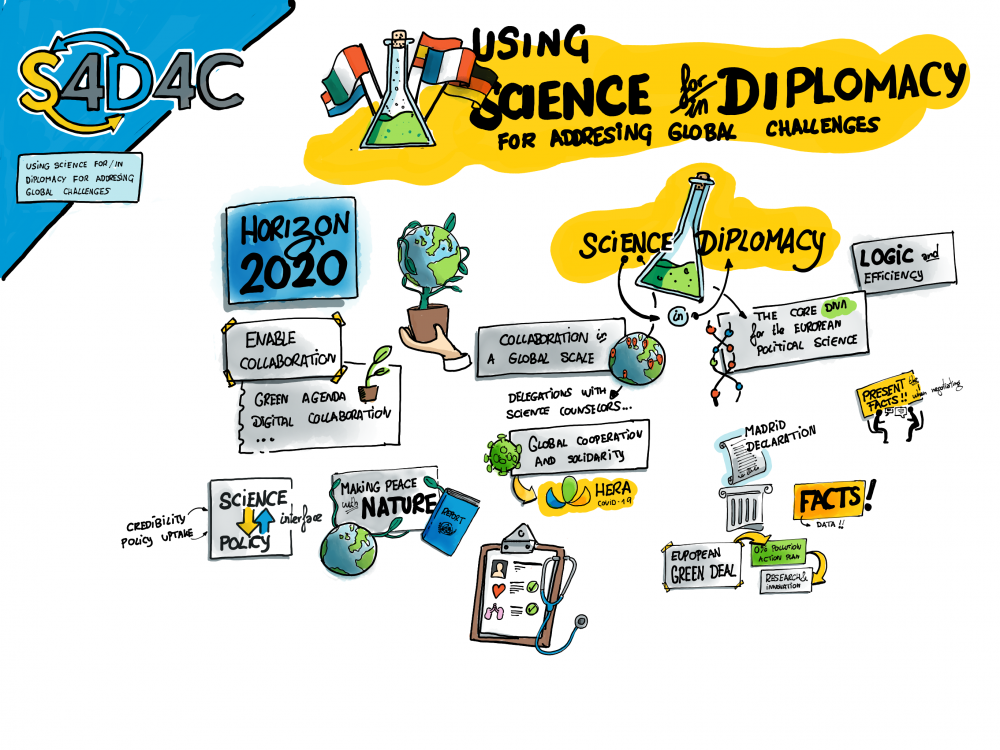 Here is the first set of takeaways from the keynote conversation:

The S4D4C colleagues Lorenzo Melchor and Laure-Anne Plumhans were then briefing us very briefly on the further functionalities for the week. They also launched two competitions: the most avid tweeter (using the #SciDipNet2021 hashtag) and the most active networker (using the networking function of our conference platform) may receive an S4D4C-branded mug.

The next session started introducing the audience to some of the analytical and conceptual results of the S4D4C project where Marga Gual Soler was teasing the most interesting conceptual issues from Tim Flink and Mitchell Young who both led big work packages of the project (starting at 14.05 on the virtual stage of the conference platform).

The session started introducing the audience to some of the analytical and conceptual results of the S4D4C project where Marga Gual Soler was teasing the most interesting conceptual issues from Tim Flink and Mitchell Young, who both led a work package in the project. The panel reflected on the use of the term and whether it has become a slogan, the tensions between its implicit and explicit use, the conditions under which the use of the term is more and less effective in international affairs, the problems of global north-dominated discourse, and the potential misuse of science diplomacy by authoritarian regimes. 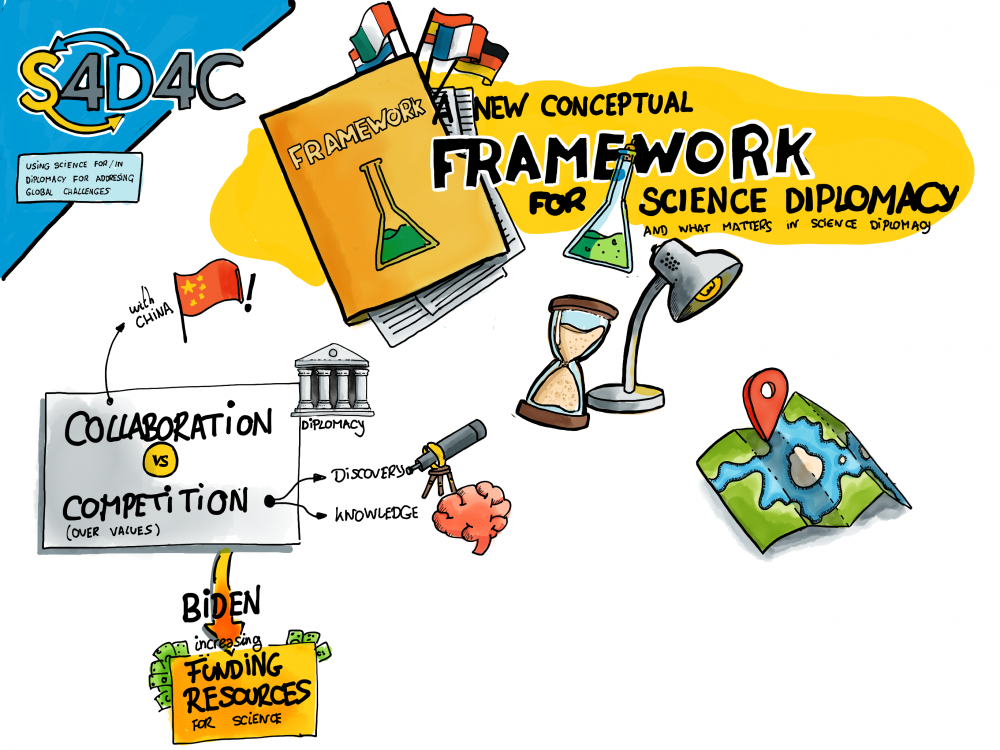 The session continued with a round table moderated by Ana Elorza Moreno who reflected on the nature of science into policy, and its uses in the context of policymaking and politics with her panellists: David Mair, (Head of Knowledge for Policy: Concepts and Methods, Knowledge Management, Joint Research Centre (JRC) of the European Commission);  Suvi Seppäläinen, (Advisor on Transatlantic Relations, Emerging Technologies, and Foresight, Strategic Policy Planning Team, European External Action Service (EEAS)), Rana Dajani (Professor of Cell Biology, The Hashemite University, Jordan, and President of the Society of the Advancement of Science and Technology in the Arab World (SASTA)),  and Thomas Flichy de La Neuville, (Research Professor, The Institute of World Politics (IWP), and Chair of Geopolitics, Rennes School of Business).

Ana stressed that during the pandemics, scientific institutions committed primarily to performing research, but were also devoted to government science advice in their fields of expertise. However, information channels and formal links of these scientific institutions with their national Ministries of Foreign Affairs were not always properly established.

David Mair highlighted first of all how difficult the relationship between science and policymaking is, as the two worlds are not alike at all and the work of the JRC in trying to bring them together. David stressed also how necessary it is to bring different disciplines together, as policymakers do not need insights from one discipline but rather need to have a complete vision and inputs from multidisciplinary panels.

The European Union and the Member States need also a robust ecosystem for science for policy. Institutions and people trained and equipped are fundamental.

Ana underlined that like in every crisis; there is a risk for pandemics to amplify existing social fractures and inequalities and this may have political consequences. How world powers choose to look after themselves versus the rest of the world will define global politics over the coming decades.

Thomas Flichy agreed that the crisis has different impacts on the world order. The first impact is on geo-economics. Covid-19 has spawned the collapse of the parasitic economy, of the artificial functions. It has brought about an important recession and an artificial or temporary restoration of borders. In fact, the new borders which have appeared separate individuals from one another and societies have exploded into individual bubbles.

Thomas Flinchy believes that COVID 19 policies have not always been based on a scientific approach. Facts and figures have been disputed and the pandemic established a new rating among the countries. Those who were able to cope with it expediently and at a limited cost, and those who were not able to do so. And it should be noted that, at that point, democratic countries were not in the first places of this new rating.

Suvi Seppäläinen explored how technology affects global order and the role of the European External Action Service. Suvi unpacked the concept of geopolitics, which may be divided into three baskets: security and defence implications, geo-economics and values, and human rights (and the stability of our democracies).

Rana Dajani talked about the complex interface between science-policy-diplomacy and how it relies on the power of networks and the appropriate coordination (network of networks) to make the most of them.

David Mair highlighted how important it is to train young generations of scientists and policymakers. JRC is working hard hand in hand with the member states.

The chair stressed that science advice has never been in greater demand but we have seen also an increasing distrust in expertise. Thomas Flinchy insisted that science will have an impact of policy as long as it is irrigated by an open scientific debate.

Suvi believed that EEAS should be better at highlighting and making visible the numerous science diplomacy actions performed during the last 10 years. However, this is not enough and more should be done, devoting concrete resources (as an example, the EEAS has appointed recently the first Science Advisor) and efforts towards better coordination.

Rana Dajani said that in order to have a common mission-oriented policy focused on problem-specific societal challenges, all disciplines should change their mind-sets and work together respecting each other. 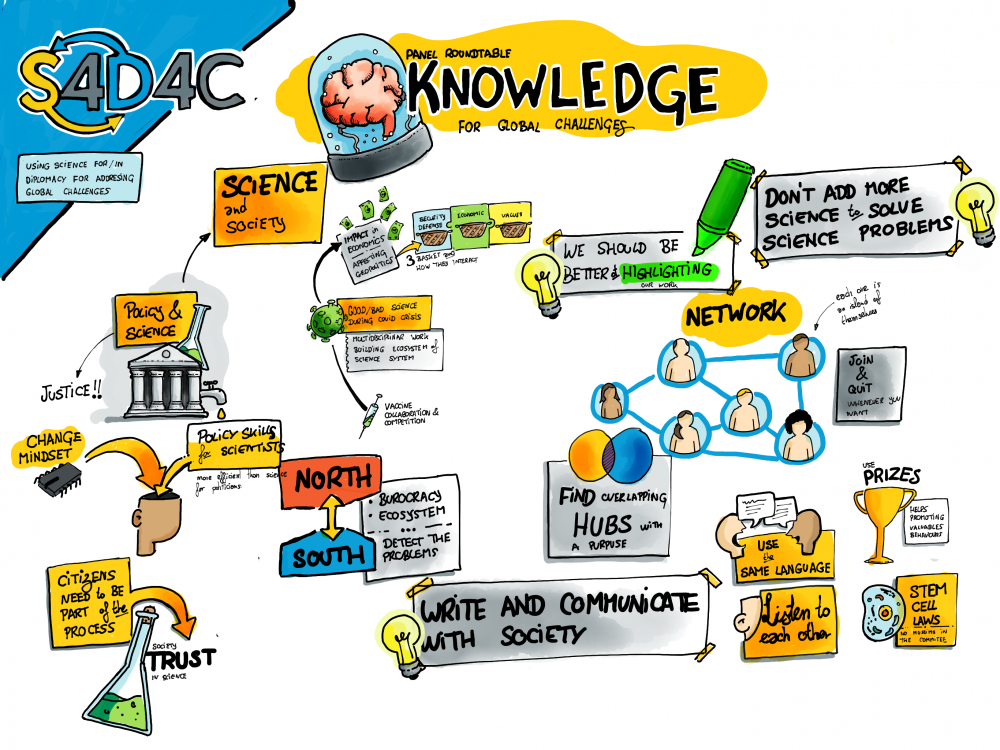