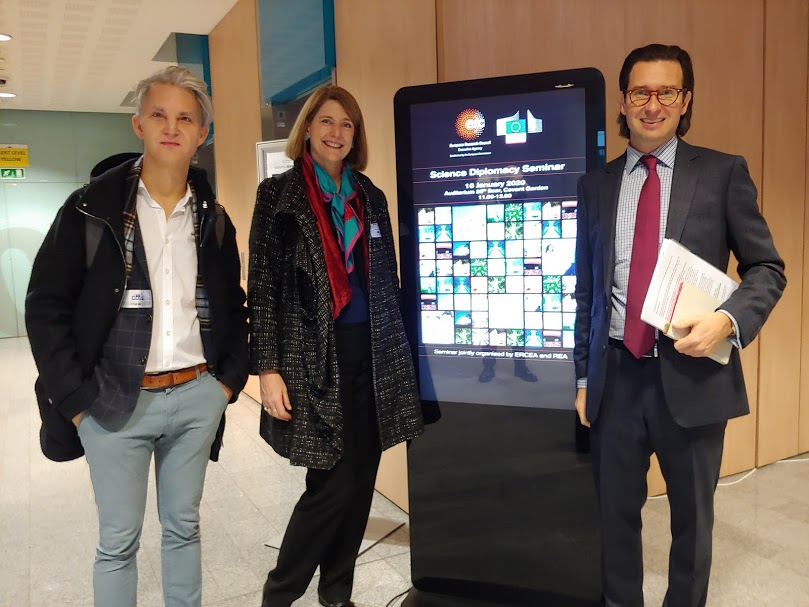 The European Research Council (ERC) is the European Commission’s body to fund and support high-quality research in Europe. It supports investigator-driven frontier research across all fields based on the principle of scientific excellence. As such it works closely with the Research Executive Agency (REA) of the EC. On January 16, 2020, a joint ERC/REA seminar on the topic of science diplomacy was organised in Brussels. Tim Flink was invited to speak on behalf of S4D4C about “Using science for/in diplomacy for addressing global challenges”. 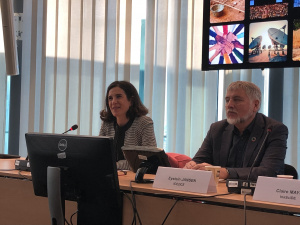 In an introduction to the seminar, together with Corinna Amting, Angela Liberatore underlined the importance of science diplomacy on the EU level, as well as the fact that there are bottom-up as well as top-down approaches to science diplomacy, which can be either alternative or complementary to each other. She highlighted the need to understand more about science diplomacy, especially when it comes to tackling the grand challenges of today, such as climate change. Maria Cristina Russo, Director for International Cooperation at the DG for Research and Innovation, shared insights of the European Commission’s ongoing activities and future perspectives on science diplomacy. In line with former Commissioner Moedas’ strong engagement in science diplomacy, Director Russo recalled prominent examples of the EU’s support, such as the institutionalisation of the PRIMA initiative that, based on Art. 185, fosters partnership for inclusive, healthy and prosperous Mediterranean societies and SESAME, the synchrotron radiation facility in Allan (Jordan) that gets researchers from the Middle East and beyond to work together – not least as a peace-building initiative modelled after CERN that had initially followed a similar idea after WWII.

In addition, Director Russo called for paying increased attention to the new Commission’s strategy of strengthening ties between pan-European initiatives and regional partners abroad, of plans to build a platform that should help find coherence in the many activities and voices associated with science diplomacy in the Member States together with the European institutions and international organisations. Moreover, science diplomacy will be more strategically applied to specific topics and regions, as was exemplified by water management initiatives with Central Asia. Not least, the new strategy of the Von der Leyen-Commission is to “make Europe to a stronger actor in the world” and thus attach greater importance to European values that also apply to scientific freedom, sustainability and societal relevance vis-à-vis non-European regions. In this respect, it is expected that science diplomacy keeps enjoying a strong position under the new Research Commissioner Maryia Gabriel (whose portfolio ranges from Innovation, to Research, Culture, Education and Youth) following the overall priority of the newly established Commission. Eventually, science diplomacy should become a direct part of the EU’s external action portfolio, Ms. Russo added.

Claire Mays, executive director of the InsSciDE project (“Inventing a shared Science Diplomacy for Europe” insscide.eu) took the stage first to recall historical examples of international science diplomacy activities, such as from the Artic, to reflect on the contextual conditions of achieving cooperation for the common good.  Mays first situated present-day discourse on the function of science diplomacy ranging from “only multilateral, science-based agreements can save us from nuclear and climate catastrophe” to a focus on the contribution scientists themselves can make to societal responsibilities across borders. The Arctic, a region which is particularly affected by climate change, has for 150 years been a prominent playing field for international science cooperation. Actors across time have affirmed that “In the Arctic, we can create peace, it is a space dedicated to science.” But it is also in danger of fragmentation due to the wilful irruption of economic interests and denial of science as Claire Mays added.

Eystein Jansen and Halvard Buhaug contributed their views as ERC-funded researchers, thoroughly embedded in the evidence about the real consequences of climate change. Professor Jansen, who titled his presentation “Science diplomacy in the climate area: Arctic sea ice and Greenland ice sheet sensitivity”, warned that “even if the Paris targets are reached, a lot of damage could be possible, especially in the Arctic”. In this respect, science diplomacy in all three dimensions should be supported, as research in the Arctic has to be multinational due to diverging interests and claims of all involved actors. Mr. Buhaug looked at science diplomacy from a climate security perspective. He thinks, at least, it is positive that policy actors are now more receptive to nuanced messages, including those from science. His observation: “Climate security thinking in policy circles is only slowly converging with the scientific thinking.”

Eystein Jansen and Halvard Buhaug are both ERC grantees and contributors to the IPCC (Intergovernmental Panel on Climate Change). 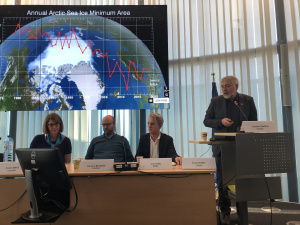 Tim Flink started his presentation by warning against unreflected sensationalism that can be observed in the discourse of science diplomacy. What is needed is a combination of what Tim Flink also entitled his presentation with: an “integrative and reflexive approach to Science Diplomacy”. The integrative perspective towards science diplomacy is needed, because it can analyse and deconstruct science diplomacy as a social phenomenon whilst raising awareness among actors about its relevance and limits at the same time. It hardly makes sense, according to Tim Flink, to distinguish between scientists, scholars on the one hand and actors from the political system on the other hand, as everyone involved can be construed as an actor taking part in a performative discourse. With this in mind, reflexivity calls for high sensitivity of the political functions that research projects on science diplomacy can intentionally or unintendedly fulfil. But reflexivity also means that feedback from awareness-raising interactions with actors, such as in the S4D4C’s networking events and training courses, offers the opportunity to do further research on the concept of science diplomacy itself. 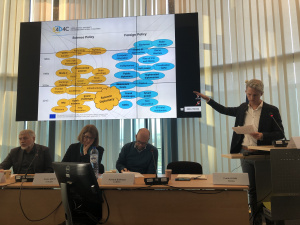 In a sociohistorical presentation, Tim illustrated how science and foreign policy concepts have found increasing intersections that were later called science diplomacy, but generally point to an increasing politicisation of science, and increasing scientification of politics while both have been undergirded by greater public media attendance and calls for public engagement. Next to current case-study research of the S4D4C project that Tim presented, this sociohistorically borne logics already suggest the possibility that every scientist/scholar, science policymaker and science manager could – intentionally or not – find her/himself in a social setting that is of immediate diplomatic relevance. Equally so, every so-called diplomat could act in a way and setting that is either (seen) of scientific relevance or at least should be considered relevant for science policy.

After a Q&A session with the audience, it was Petri Backman who closed the seminar by briefly recapping the discussions.

—> The seminar was recorded and its webstream can be accessed HERE

Do you want to know more about Tim Flink?

Very recently, he also published an article in the Festschrift of the German Academic Exchange Service (DAAD) on the occasion of the 10th anniversary of the DAAD’s worldwide Centres of Excellence in research and teaching, next to German Foreign Minister Heiko Maas and former DAAD-President Margaret Wintermantel. The main argument of the article, entitled “International science collaborations ever more needed to tackle global problems,” is that international research collaborations can function as instruments of science diplomacy, but they should neither be regarded a form of “ersatz diplomacy” nor be overburdened or hemmed by too many non-scientific expectations and conditions, for example when it comes to output evaluations. Read the article here.

Do you want to know more about the European Science Diplomacy cluster?

The European Commission funded three research projects on science diplomacy: EL-CSID (2016-2019), InsSciDE (2018-2021) and S4D4C (2018-2020). Information about them is available on the website www.science-diplomacy.eu. The two currently running projects were represented in this seminar through Claire Mays and Tim Flink.

Do you want to know more about the European Research Council and Angela Liberatore?

With Angela Liberatore, Head of Unit B.5 at the ERC, who co-organised the Seminar, the S4D4C project did a short video interview in the frame of her participation in the project’s 1st global networking meeting in Madrid in December 2018. In this video she told us about her background in the European Research Council and shares her vision for a European science diplomacy.