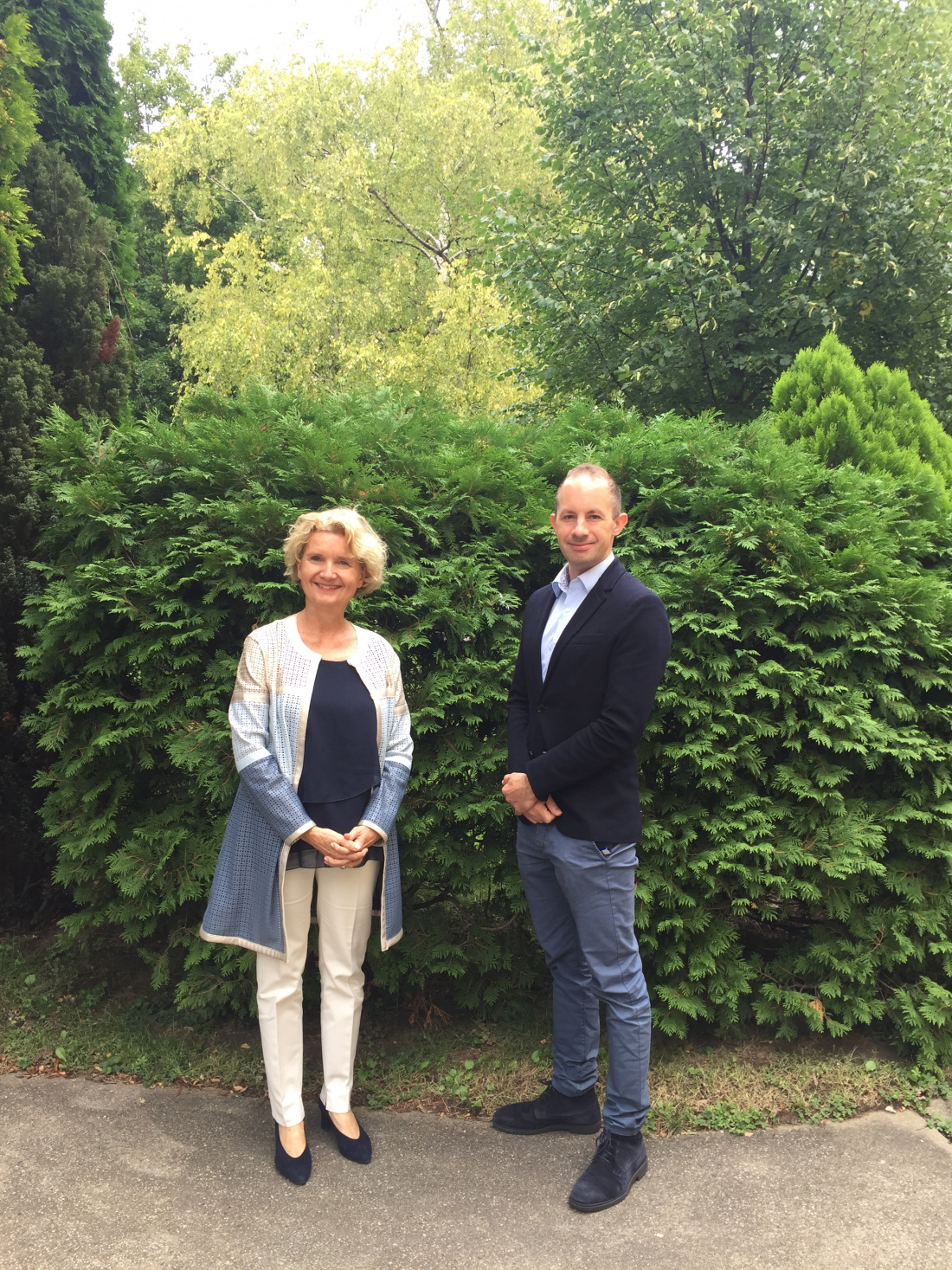 Science diplomacy is made of individuals of many different backgrounds, blurring the lines between diplomacy and science.  In this researchers’ voice, SD4DC team members, Susanne Keppler-Schleisinger and Maximilian Huck elaborate on the multifaceted role of diplomats in the science diplomacy interface.  Susanne is the Deputy Director of the Diplomatische Akademie Wien – Vienna School of International Studies (DA) where she is responsible for the development of diplomatic training programmes for public officials and diplomats from all over the world. Maximilian is a project manager at the Executive Training department at the DA and is responsible for the coordination of EU related training programmes. Susanne and Maximilan contribute greatly to the S4D4C training activities.

Susanne, science diplomacy has many definitions, what does it mean to you? How would you define it?

The world is interlinked and so are the global challenges we are facing right now. Common action against climate change, the pollution of space, the extinction of species, or the safe use of nuclear energy demands solidarity as well as close collaboration between both stakeholder groups. Science diplomacy has become more urgent than ever. One world and one universe are all we have!

You have considerable experience in training diplomats and foreign affairs officials.  When did you first hear of science diplomacy and how have you since included it into training targeted at diplomats?

Susanne: Modern diplomats are all-rounders and interact with a broad range of actors in their daily work. Training for science diplomacy happens at various levels, both in lecture rooms and on the job. It starts with academic education, is followed by internships in scientific or diplomatic institutions, and continues in the diplomatic service.

My first experience with science diplomacy took place 25 years ago – in the context of the United Nations. I will refer to this when answering the following question!

There are diplomats who start off as scientists and only later embark upon diplomatic careers. One of my colleagues in the Austrian Foreign Ministry, for example, holds a medical degree. As a young medical doctor, he developed a keen interest in the fight against pandemics, only later deciding to become a diplomat. The career paths of diplomats can be much more diverse than the general public might be aware of.

Science diplomacy has deep roots: scientific cooperation between countries has kept diplomatic and other important channels open in times of political tensions such as the Cold War. It is thus not a totally new phenomenon.

Science diplomacy embraces many facets: the Diplomatische Akademie Wien / Vienna School of International Studies offers courses and training on science diplomacy in general, as well as on more specific issues such as health diplomacy, climate diplomacy, water diplomacy, international energy questions or global security and nuclear safeguards. Topics such as artificial intelligence and big data are included in our curricula as well. Cultural diplomacy is an overarching theme that also ranks high on the agenda. The DA offers these courses to its students who are enrolled in three academic programmes and to trainees from all over the world who participate in tailor-made executive programmes. The DA also organises training on science diplomacy and related issues for the Austrian Foreign Ministry.

How can diplomats concretely apply a science diplomacy approach in their daily activities?

Susanne: Diplomats benefit from exchange with experts, academics and researchers when they elaborate or negotiate positions on issues that require scientific data and findings. We include scientists in our delegations when their expertise is needed. This might be the case in multilateral negotiations at the United Nations, the World Health Organisation or the International Atomic Energy Agency. Scientists who are familiar with the inner workings of multilateral organisations, and the opportunities and limits of international decision making are important partners in the world of diplomacy and international relations. I welcome the lively interest of scientists in our new training, which introduce them to the world of international negotiations.

Throughout our careers, we have to work with information based on research, and we need the right skills and knowledge to integrate scientific facts into our diplomatic positions, our reports, and our negotiations. When I served at the Austrian Mission to the UN in New York, I studied the reports of the Secretary General of the UN on topics such as population development, international drug control, or the control of organised crime before the start of our deliberations. The reports of the SG also include contributions from scientists, wherever relevant. I clearly remember the inspiring UN paper on “the human genome and human rights” that started the first global debate on the implications of genetics on the diversity of humanity. This discussion opened a fascinating new topic on the agenda of the UN, which ultimately lead to universal guidelines in 1997.

Negotiations on international drug control require as a minimum a basic understanding of precursor chemicals, and decisions on the control of international migration should be guided by statistical data and scientific advice on population development. These are just two examples of the interconnectedness of science and diplomacy.

Maximilian, together with Susanne have recently held an online Summer School in collaboration with the United Nations University Institute on Comparative Regional Integration Studies (UNU-CRIS), titled “Modern Diplomacy”: What does modern diplomacy look like and how does it relate to the science diplomacy approach?

Maximilian: In recent years the concept of diplomacy has evolved in a very dynamic way. Non-state actors such as civil society representatives, activists for a broad range of issues such as human rights or disarmament, as well as scientists, have assumed an influential role in international decision making.

The Summer School on Modern Diplomacy, organised by UNU-CRIS and the DA, in collaboration with Department of Foreign Affairs of Flanders, Ghent University and Vrije Universiteit Brussel (VUB), highlighted topics such as “geopolitics of the energy transition”, “the international climate regime” and “science diplomacy and health”. It attracted the interest of 45 participants from four continents, all of whom work for international organisations, the public sector, civil society organisations and academia.

The Summer School presented a comprehensive, in-depth training in order to facilitate professional and cutting-edge responses to the rapidly changing demands in the field of diplomacy. Participants concluded that effective diplomacy relies on the ability to engage on numerous fronts and in different areas of professional expertise and to cover multi-level and multi-faceted approaches. The intersection of science and diplomacy has become – once more – evident in these discussions.

UNU-CRIS is a highly-regarded academic research institution whose training is built upon the latest scientific findings, while the DA’s vast network of high-profile international practitioners enables participants to actively exchange with academic and professional experts in international relations. Science diplomacy has become a binding element between these institutions through this project.

Science Diplomacy aims at bridging the world of science and diplomacy and involves a wide array of actors and fields. Interest in science diplomacy comes increasingly from scientists and researchers (from participation in our webinars and online course).  In your opinion, does this reflect the larger ratio of scientists to diplomats?

Maximilian: Yes, there are more scientists and researchers than diplomats active on a global scale, and this fact might explain the statistics of participation in the S4D4C training courses. I would like to stress that we welcome interested professionals from all corners of the world and various backgrounds to our training programmes, and are thrilled by the lively interest of scientists in our programme on science diplomacy.

The DA is a core partner of the S4D4C project. How would you summarize the cornerstones of S4D4C?

Maximilian: Science diplomacy, although practised in many areas, in many forms and over many years, has gained a clear profile in European and international relations through S4D4C. Consequently, the concept, opportunities and capabilities of science diplomacy have been made more visible in international cooperation projects and strategies, also thanks to the S4D4C-project. New networks have been created that will keep these great dynamics alive.

The S4D4C project also aims at actively creating strategic advantages for the European Union in the context of the global competition in research and development. The COVID-19 pandemic clearly demonstrates the need for solidarity between EU-member states, the EU and other regions in the race for effective medication and vaccines.

The DA, as a consortium member of S4D4C, is highly committed to contributing to achieving these important goals and stands ready to offer its science-diplomacy-related training programmes to interested institutions and individuals.

Susanne, what would you advise aspiring diplomats?

Susanne: A diplomatic career means life-long learning. It definitely is an energizing career choice that requires an open mind and a diverse professional toolbox.

I conclude with the following recommendations addressed to diplomats:

Thank you Susanne and Maximillan !

Susanne participated as a speaker during our first interactive webinar, click here to read more.

What about scientists? Have a look at our researcher’s voice with Peter McGrath here.