The first episode of our interactive webinar focused on deepening students’ understanding of module 2: What is Science Diplomacy?

The webinar offered an interactive learning experience combining discussions between experts on the content of the course and interactions between all attendees (experts included) through discussion groups.

The webinar started with an exclusive release of an S4D4C video, conceived to introduce the concept of science diplomacy and its potential to handle global challenges.

The video is now available on our YouTube channel

What is science diplomacy for addressing global challenges?

Elke Dall, project coordinator of S4D4C, warmly welcomed attendees before giving the floor to Lorenzo Melchor, one of the authors of Module 2 and chair of the first webinar. Lorenzo introduced the outline of the webinar and kickstarted the first interaction with the audience through an ice-breaking session using the online survey tool Mentimeter. Another S4D4C partner and Module 2 author, Izaskun Lacunza, asked the audience a number of questions via the online tool.

As observed in previous webinars, many attendees shared a research-oriented/scientific background. 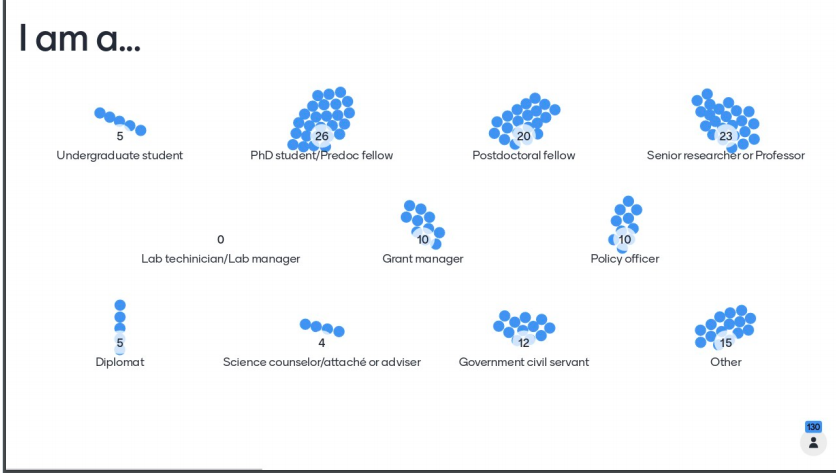 The Interactive Webinar Series’ main aim is to build community and foster networking. According to the expectations of attendees, their interests greatly matched with that purpose. Most attendees qualified networking as a desired outcome of the session, quickly followed by the aim to learn.

The session first accommodated the latter aim by starting with a roundtable composed of three guest speakers representing different protagonists of science diplomacy. While Charlotte Rungius provided the audience with her expertise as a scholar of science diplomacy, Susanne Keppler-Schlesinger, Deputy Director of the Diplomatische Akademie Wien – Vienna School of International Studies, brought the diplomatic perspective to the table. Minh-Hà Pham, Counsellor for Science and Technology at the French Embassy in London, contributed to the discussion from her practical experience as a career science diplomat.

The first section of the discussion focused on the conceptual definitions of science diplomacy.

For Charlotte, there are two options to try to analyze and define science diplomacy as a concept. One can choose the ‘essentialist’ approach, which focuses mostly on trying to establish criteria and typologies of science diplomacy, or one can take a ‘re-constructive outlook’ which tries to understand the discourse associated with the concept and analyze its narrative.

To have a more complete idea of science diplomacy, both approaches are important. Charlotte focuses more and more on the re-constructive approach. Together with Tim Flink (click here for relevant publication), she analyzed the discourse of science diplomacy and found that it is often used as a ‘catchphrase’ that conceives science in superficial ways, serving a certain narrative. Thus, for Charlotte, an aspect of science diplomacy is its narrative which focuses on global challenges and carries assumptions about science and its role in the global order.

For Susanne, science diplomacy has indeed existed as a practice in the past but certain things have changed determining the practice of diplomacy and eventually of science diplomacy: First, digitalisation has fastened interactions. Second, diplomats are no longer cooperating solely with state actors but they also interact with regions, cities and companies. Finally, the competition for the brightest minds has intensified at times where collaboration is absolutely necessary for the face of current global challenges. Minh-Hà also emphasised that science diplomacy is a rather old practice but which is more and more moving from bilateral to multilateral interactions.

Charlotte reminded that while the practice might be old, the concept has been brought in the 2000s by actors who were seeking institutional change in the United States of America. This reality is reflected in the definition and use of the concept. Science diplomacy was later embraced in the European Union but has not diverged much from the earliest definition brought by AAAS and the Royal Society.

To conclude this section, Lorenzo asked speakers to reflect on definitions, roles and training of science diplomats.

For Minh-Hà, it is not an easy profile to define. For this, Lorenzo’s publication in the Hague Journal of Diplomacy offers a clear typology of what science diplomats are. From her perspective as a French official, fostering interests in science diplomacy should start with science and innovation research universities recognising that beyond internationalisation and attractiveness, they should also hire specific staff with an international relations background to foster the ‘diplomatic’ capacity of their institution. Scientists suffer from not being trained in international relations, which makes it hard for them to enter a field where science is mostly used for state interest and not viewed as a priority in itself.

For Susanne, science diplomats are hard to define because they usually don’t follow a clear career path: there are multiple ways to practice science diplomacy and many ways to get there. Science diplomats can be advisers who support political leaders when preparing decisions, or scientists working in embassies or in international organisations, some diplomats also have a scientific background which they use to guide their diplomatic tasks.

Many ways lead to Rome and it is the same for science diplomacy careers.

For Charlotte, a great variety of skills make science diplomats, and different kinds of diplomats can be identified. An important aspect to try to define science diplomats and the context they operate in is whether they are identified as science diplomatic implicitly or explicitly. As discussed in S4D4C’s publication, “The ‘Matters’ of Science Diplomacy”, the act of using the label is political and often a choice.

The roundtable was followed by a Q&A session, where questions were selected from the chat to be answered by the panellists. In parallel, two S4D4C team members, Tim Flink and Ewert Aukes, played the role of the ‘devil’s advocates’ challenging the speakers and the audience to rethink their preconceptions of science diplomacy.

To bring out the interactive aspect of the webinar further, in the second part of the webinar, attendees were divided into small groups and were invited to discuss three questions:

The group composition changed for each question. In between the rounds, attendees were invited to reflect on the content of their discussion via Mentimeter. Below a sample of their answers: 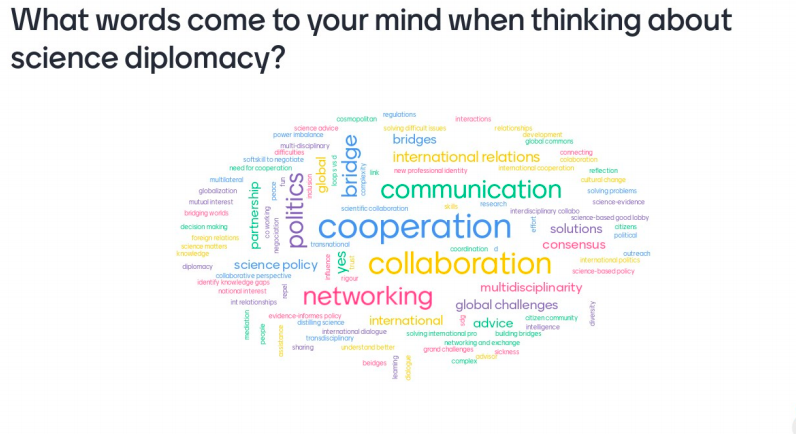 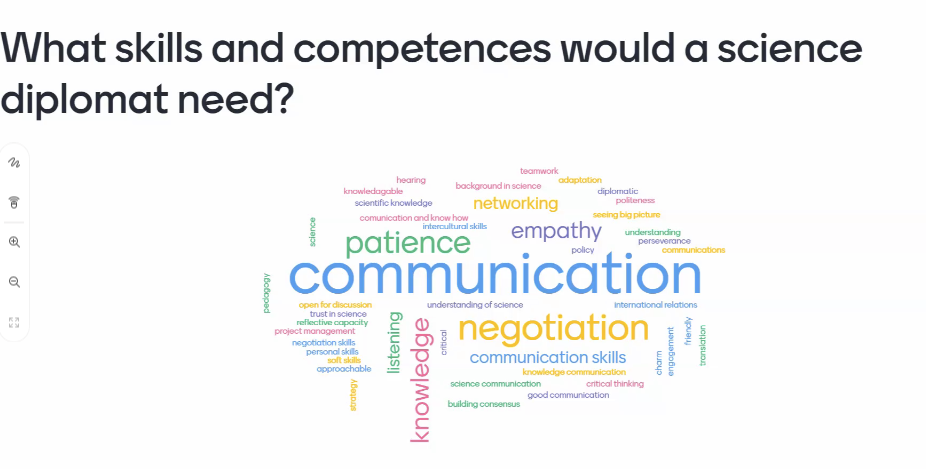 To wrap up the session, each panellist  andwas given the opportunity to provide their final remarks:

Charlotte highlighted that, despite the shortcomings of the concept, practitioners of science diplomacy usually share the objective of wanting to make the world a better place, and for this, the concept has to be more critically used. At the end of the day,

what makes science diplomacy interesting is this moment of magic where two worlds understand each other: that’s why a platform of interactions between science and diplomacy is crucial.

Susanne emphasised that a career in diplomacy is all about lifelong learning and that diplomats will always have to work together with science, as it has been in the past. Scientists are key to diplomatic work, however, there are not decision-makers. In the words of Claude Levi Strauss “The scientist is not a person who gives the right answers, he’s the one who asks the right questions”.

For scientists and diplomacy to fruitfully work together and realise necessary interactions, Minh-Hà recalled that the intercultural gap between science and diplomacy has to be diminished.

see science diplomacy rather as a set of practices rather than a job description.

The first interactive webinar ended on the thank you words of Lorenzo Melchor and Elke Dall, inviting the audience to participate in all of the following webinars.

If you are not yet registered for the online course, just click here.