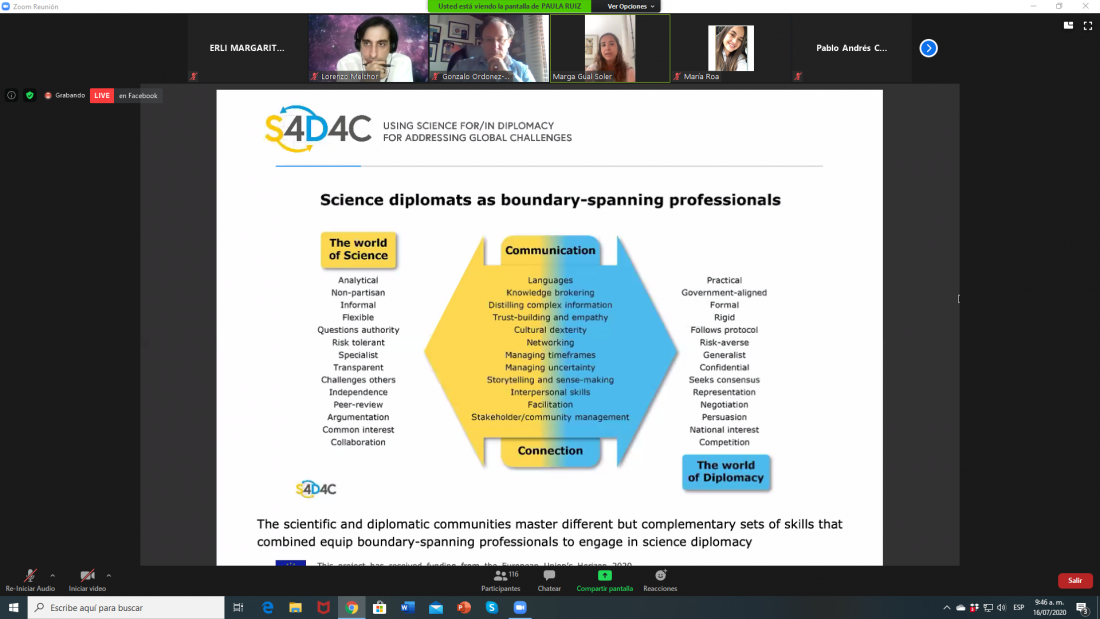 Science diplomacy is an emerging concept in international relations and global policymaking. It entails narrowing the gap between the fields of science and diplomacy, often perceived as belonging to different worlds. Bringing together actors from both the science and diplomacy fields is an opportunity to better address global challenges such as climate change, poverty and inequality, migrations, food security and even different types of health crises like the current COVID-19 pandemic.

On July 16 2020, at a pioneering event on the subject in Colombia, the Faculty of Finance, Government and International (FIGRI) of the University Externado of Colombia hosted a webinar to discuss different viewpoints on international experiences and a space for reflection considering the country’s context. The event was coordinated by FIGRI professors Gonzalo Ordóñez-Matamoros (Director of the Center for Research and Special Projects -CIPE- and Assistant Professor at the University of Twente, a partner organization of the S4D4C project consortium) and Paula Ruiz (Director of the International Relations School of the FIGRI faculty).

The international panellists were Lorenzo Melchor (specialist in science advice and science diplomacy from the Spanish Foundation for Science and Technology –FECYT– and also a member of the S4D4C project);  Marga Gual Soler (young leader of the World Economic Forum, member of the S4D4C project through The World Academy of Sciences and Science Diplomacy Advisor to the former European Commissioner for Research, Science and Innovation Carlos Moedas); and Pedro Ivo Ferraz da Silva, Secretary and Science Head of Science, Technology and Innovation at the Brazilian Embassy in New Delhi and cofounder of the São Paulo Diplomacy School (InnSciD SP). The Colombian panellists were Maria Piedad Villaveces (Director of the Colombian Association for the Advancement of Science -AvanCiencia and PhD candidate with a thesis on Science Diplomacy); and Lucas Gómez (Director of the Economic, Social and Environmental Affairs Directorate of the Colombian Ministry of Foreign Affairs).
Discussants from FIGRI were Martha Ardila (Coordinator of the Observatory of Analysis of International Systems -OASIS); Maria Teresa Aya (Coordinator of the Masters Programme in International Affairs); Soraya Caro (Director of Center for Studies on Contemporary India -CECICAM); and Rafael Piñeros (Coordinator of the International Relations Area at the Bachelors Programme).

The following topics were addressed during the discussion, to which more than 100 people attended:

Multiple voices claim the need to build bridges between science and diplomacy. According to Lorenzo, there is an increasing importance of the science, technology and innovation fields in  International Relations practice and study, this interdisciplinarity makes economic progress, competitiveness, international cooperation, consolidation of as global actors, innovation nodes and evidence-informed public politics that work as evidence of a good government. In the same line, Pedro stressed that the acquisition of scientific, technological, and innovative capabilities is a condition for sustainable development. International experiences show how the labelling of such interaction between these two worlds has not been entirely productive since the rules, incentives, and language in each country work differently. The questions about ‘what science diplomacy is’ remains relevant.

Lorenzo and Marga also referenced that the fluid concept of science diplomacy could be applied in three ways: science in diplomacy, diplomacy for science, and science for diplomacy (a concept developed by Royal Society/AAAS). For that reason, it is necessary for the state to take actions to find common points, synergies, and tools to deploy strategies that promote global science collaboration and competitiveness.

Science diplomacy is a concept that has come to stay, encouraging independent scientific bodies to provide science policy briefings for foreign ministry and embassy staff, Pedro said. Therefore, the internationalization of science and technology requires that international cooperation be a shared responsibility of all actors in the administration and the inclusion of other actors who are essential for the harnessing of this discipline at all levels of government in a globalized and digital world.

The three international panellists agreed that multiple actors beyond traditional ones (e.g. nation-states) are important stakeholders in science diplomacy processes, including a) governmental agents (nation-states through ministries, embassies, foreign ministries, public agencies, financing agencies and sub-national governments); b) international and supranational organizations; c) the academic sector (universities, research centres, national academies, and individual/prominent scientists); d) the private sector (multinationals, big tech, and scientific- and/or technological-based SMEs) and; e) civil society organizations (associations, private foundations, and influencers or activists). According to Marga, the role these actors play deserves further attention in order to promote the training of new professionals in the new communication interfaces between these two disciplines, where the collaboration and involvement of government agents are required to have project results, through inter-ministerial committees and commissions.

For Lorenzo, Latin America’s biggest challenge is to have an inter and transdisciplinary bonding between actors, politics, and functions. Marga explained that this challenge lies mainly in creating a professional profile for the experts and intermediaries in the science and diplomacy interface. The lack of an explicit profession makes it a hybrid one with low activism. Even though currently there are two institutionalized classifications such as the official science attaches at embassies or the science advisors to foreign ministries, it is necessary to officialize other members and actors of this network to promote ways of dialogue between countries. Just like Pedro argued: “the acquisition of scientific, technological and innovative capabilities depends mainly on the bonds that exists with international partners abroad”.

Since several years, science diplomacy has been on the European Union agenda as a priority to promote a world order through the “open to the world” and policies such as “Science with and for Society”. One of the European projects is S4D4C, for which Marga, Lorenzo and Gonzalo have done research related to science diplomacy and professional training to better position Europe as a world leader in the topic. Lorenzo noticed that Spain has been quite active in the field of science diplomacy during the last decade with the launch of innovative practices and based on a multi-stakeholder approach. In Brazil, the São Paulo Framework of innovation diplomacy has been working to integrate activities with technological companies, incentivize foreign investment in R&D and mobilize social capital for international technology transfer. Nonetheless, Pedro listed English language proficiency and harnessing globalization by academia and companies to be part of international value chains, as pending issues for Latin America.

Latin America has a slow insertion process in relation to the topic. In the case of Colombia, according to Maria Piedad Villaveces, the Ministry of Foreign Affairs has not yet incorporated science diplomacy as a strategy for Colombia’s foreign policy. However, Lucas Gómez mentioned that there have been some important steps in creating the necessary institutional conditions for the development of science diplomacy. First, science, technology and innovation have been included as one of the most important ‘Pacts’ of the Colombian National Development Plan which, according to Gonzalo, strives for doubling the GDP’s share for STI. Second, the decision to create the new Ministry of Science and Technology (MinCiencias) at the beginning of this year is another important step. Lastly, the so-called “Misión Internacional de Sabios” created last year represent an important step in the way of providing a roadmap in high-level advice for future decision-making based on STI in Colombia.

According to Gonzalo, the Colombian government is acting strategically in a geopolitical race so that the country does not arrive late to the distribution of vaccines and treatments for COVID-19, supporting and looking to contribute the scientific knowledge is required to reach that goal. From Soraya’s perspective “Latin American countries after the pandemic have the obligation to get out of the extractive dependency in terms of business and industries development, to venture in links of industrial production with added value that make quality jobs, knowledge and integration possibilities in value chains that are reformulating”. Another example was provided by Maria Teresa Aya, about the Hakim valve, which placed Colombia at the forefront of the international scene.

Gonzalo, as a public official, mentioned that Colombia is indeed investing on science diplomacy, but the Ministry of Foreign Affairs should not be the only entity that has to promote it, so it is necessary that a bigger number of actors appear in order to be involved for its operability. Maria Piedad Villaveces brought some ideas forward to reach that goal, such as implementing the 1538 decree of 2004 to have scientists as council members working ad honorem to advice policymaking and better financing for research. According to María, it is necessary to sensitize the private sector and to increase the academy networking to strengthen the country’s internal and external alliances.

In addition, Martha highlighted three aspects for Colombia to make a compact state policy about science diplomacy: 1) coordination and articulation of interdisciplinary groups to avoid the “brain drain”, 2) formulating a development model to attract private investment on STI and 3) dynamic communication between the different active actors to solve social problems. Rafael added, that the sub-national entities are key to manage public policies and establish important knowledge and result nodes. According to him, Colombia must have a high-level national directive, if this does not exist. Soraya mentioned the need for more organizational capacity to foster research, resources, and good international relations.

In conclusion, most panellists agreed that science diplomacy is one of the incipient concepts in the understanding of international relations that should be promoted and developed, as it implies a change in the relationship between the scientific community and the state, whereby the interaction of new actors and their knowledge should be a new balance point in order to start building more engagement and public policies able to face global challenges in a sustainable way. Intellectual property must be protected. While science is uncertain, complex, and ambiguous, the diplomatic world may help to make clear contributions to close inequality gaps and create economic and social development through science, technology, and innovation. The global pandemic is the best example to show a new face of science in this time of uncertainty.

This article was co-authored by Maria Paula Roa-González and Gonzalo Ordóñez-Matamoros.

Information from the event was also used in an article published at El Tiempo, one of the key newspapers of the country: https://www.eltiempo.com/vida/ciencia/es-hora-de-que-colombia-de-el-salto-a-la-diplomacia-cientifica-530282 quoting our colleague Lorenzo Melchor (FECYT).