On the 5th of June, the Marie Curie Alumni Association (MCAA) organised a webinar on science diplomacy as part of their career development series.

The aim of webinar was to give an insight into the world of science diplomacy and to present the viewers some tools and advices for a successful practice of science diplomacy. Ludivine Breger from MCAA was moderating the discussion between Elke Dall, Claire Mays and Marta Agostinho

Science Diplomacy is a practice that depends on the context. For example, in our water diplomacy case study we see that in Central Asian countries, where diplomatic relations are more difficult because of other tensions the perspectives of “downstream/upstream” matter a lot. There, scientific discussions e.g. focused on water quality can be used as a way to build trust. The same negotiations would not have the same undertones in the Danube region. Perspective is key.

The S4D4C project has been dedicated to developing greater literacy around the concept of science diplomacy. To understand better the role of science diplomacy in dealing with global challenges, the project produced nine case studies. Elke presented three of them in particular. One of the most relevant cases that enables us to understand better the current crisis focuses on infectious diseases and emphasises the importance of international scientific cooperation. It underlines the characteristics of this cooperation during the Zika epidemic, which was not a game changer for science diplomacy (while Ebola was) and certainly we can ask the question today is whether COVID-19 will have a more dramatic impact on international scientific cooperation. This is what S4D4C is currently trying to grasp and more information will be soon available.

Elke also highlighted the case study on International Research Programming and on SESAME, an international research infrastructure in the Middle East. The latter is especially interesting to understand the diplomatic aspect of the set up of research infrastructures, since it brings together countries which have conflictual histories. International research programming reveals the science diplomacy features of EU funding programmes. Which non-EU country benefits from EU research funding is also a science diplomacy question. The relevance of the case studies is reflected in the European Commissions’s publication Open Europe, which Elke referenced.

Through the case studies and its work on science diplomacy literacy, S4D4C has established benefits arising from the practice and advocates for science diplomacy approaches to be adopted worldwide. In the Madrid Declaration, one can the find the principles necessary to do so. In the recently published policy report, S4D4C´s vision for the development of science diplomacy is presented together with identified stoppers and drivers. Part of S4D4C´s vision is to involve more scientists and researchers into diplomatic processes. In line with this statement, the report is open for feedback and will be adapted according to comments that are received. 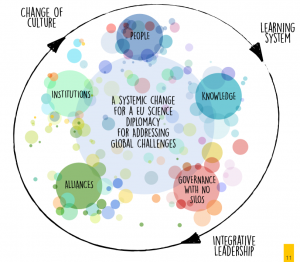 Along its knowledge creation activities, S4D4C has created many opportunities for scientists, diplomats or graduates allowing to inform and train themselves to enter the science diplomacy interface. The European science diplomacy online course is the newest training opportunity developed and offered by the project. Elke concluded the presentation with a description of the course’s key learning points.

The next speaker was Claire Mays, engagement and communications specialist, and currently executive director for the Horizon 2020 project InsSciDE “Inventing a shared Science Diplomacy for Europe“. Claire´s presentation focused on what scientists can take away from her experience to make a meaningful impact using policy translation. For her, researchers need to go where their impact will be the most felt. Many communities and associations discuss and provide resources for impactful research. Scientific societies, for example, not only create interactions between scientists but are also great places for advice to policy makers. To find such communities where impactful research can be fostered, one has to look outside the box. As our colleague Marga Gual Soler often recalls, if you are interested in starting a career in science diplomacy, don’t limit yourself to a word search, most science diplomacy jobs are not designated as such.

Claire herself found her way to impactful research in an unconventional manner. She operates outside of the university context and yet she managed to get her research taken into account by showing-up, publishing, responding to invitations and sharing her work. She was eventually invited to take part in an US national research council policy advice on high level waste. This leads us to her second advice: Go where the meaning is. For research to be impactful, one has to go where decisions are being made. In her role as adviser she was involved in mediation, building dialogues and creating condition for research. Her work was important and had an impact because it proved to be meaningful for society. Being part of formal and legitimate structures helps in that process. In the S4D4C online course, module 3 gives great insights into relevant stakeholders and networks. She advised everyone to go online and research about “Responsible Research and Innovation”. As a researcher, you will be expected to show how you intend to have impact on key areas such as diversity, gender or ethics.

When asked what was her most meaningful experience from a science diplomacy perspective, she mentioned that while many experiences were valuable, the publication of her first peer-reviewed article was important as it was the outcome of discussions that took place at an international meeting. She states that

All in all, it is really worth to communicate and exchange with others.

Marta Agostinho, the coordinator of EU-LIFE, an alliance of European life science based research institutes, was the last speaker. She introduced EU-LIFE and her role as a coordinator. EU-LIFE acts as voice for research institutes in the European policy landscape and aims at developing best practices in research governance. It was created as a result of the lack of representation of independent research institutes operating outside of the academic world. EU-LIFE is now a very big community, taking actions which are not always visible at first sight but which actually enable scientists to work in the best possible environment. Everything done in the lab is the result of political decisions, which makes it very important to have an organisation representing life science research institutes in science policy.

Marta defined a few points which make science policy advocacy possible. First, it requires reputation. One has to operate via a formal, recognised structure. Reputation is also dependent on visibility. Policy lobbying requires a regular presence in the European policy making bubble, that is in Brussels. Developing a public image via workshops and meetings is important to the same extent as creating personal and individual relations. Lastly, to influence policy, any organisation has to follow up closely the policy agenda and react on it through policy briefs which state the organisation’s position and vision. All of this helps the voice of the scientific community to be heard. Impact is one of the reasons why Marta likes her job. Her position gives her a real helicopter view of science. She especially likes interacting with different sectors beyond research and using her international network to provide real input into complex issues. Marta gave a crucial piece of advice to scientists interested in entering the policy field:

As scientists, we do not teach, instead we talk and build trust to come to a common decision.

After her presentation, Marta was asked to elaborate on the language barrier arising between scientists and policy makers. She stressed the necessity to learn both languages and to always consider whom you are addressing. Depending on the political level, your interlocutors will have different interests in science and/or scientific literacy. Knowing how to get your ideas across to those actors is key because it is where you can have an impact.

Another question from Pierre Bruno Ruffini (professor in Le Havre, member of the InsSciDE project), enquired about the role of EU-LIFE during the Corona crisis. According to Marta, their priority was to ensure that the temporal shut down of institutes happened as smoothly as possible. It is now to coordinate that they can reopen in a safe environment. Beyond those practical points, life science institutes were really in the eye of the hurricane, and still are. Lots of research institutes changed their activities to support the efforts to limit the health crisis. The community was fast to participate in combatting the virus, everyone was ready to do its part. In addition, scientists were most of the times taken seriously and invited to appear in media, making their research more impactful. While this is a positive development, more work needs to be done so that scientists are able to address the wider population more clearly.  For the future, EU-LIFE also has to make sure that research on non-Covid-related issues is still taking place and is funded.

To conclude the discussion, Mostafa Moonir Shawrav, chair of MCAA, asked the panellists to reflect on the role of politicians in addressing global challenges and how we can ensure that they actually “do their job” – in particular since we see that both scientific and diplomatic communities “are doing their job”. To answer this question, Marta pointed out that in countries where politicians did not listen to experts at the beginning of the COVID-19 crisis, the situation is worse. Scientists can certainly play a role in bringing knowledge to political spheres but making politicians act is a job for the whole society. We need to invest in a better understanding of aspects related to a crisis and have to analyse its risks as citizens. Researchers need to learn how to communicate but also to listen in order to build common solutions.

The video recording of the event can be requested from Ludivine Breger (the main organiser at MCAA) via this form.