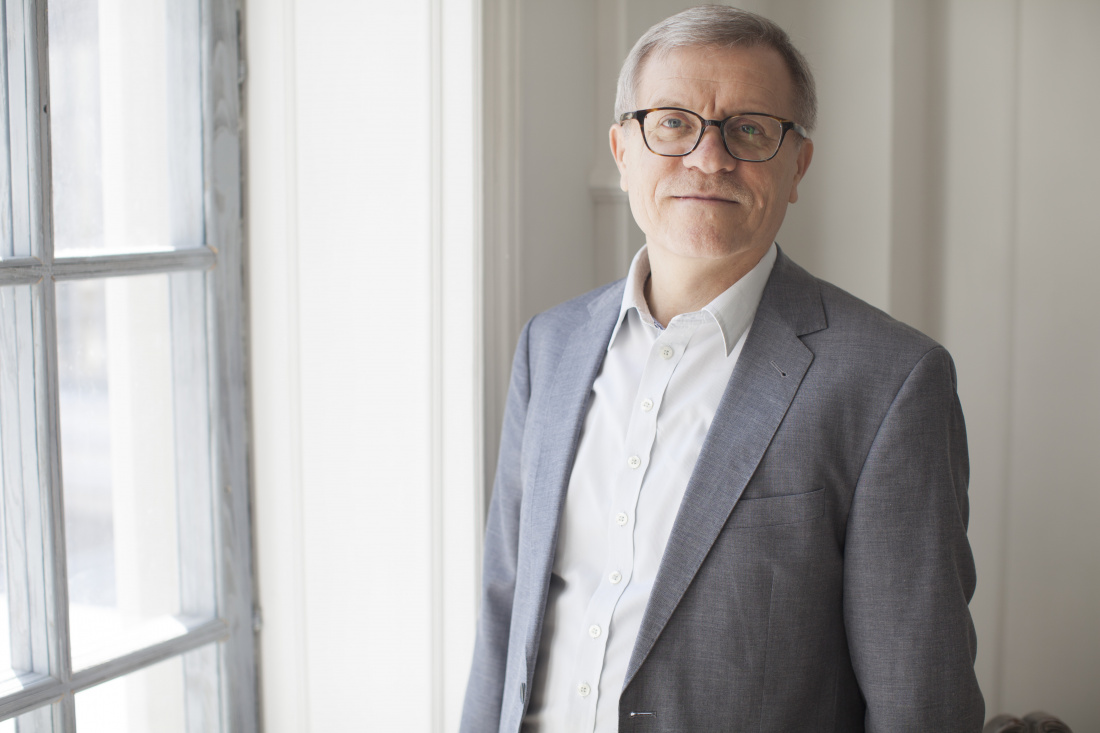 For our fourth stakeholder voice, we contacted Alexander Sokolov from the Higher School of Economics in Moscow in May 2020 through email. The Higher School of Economics (HSE) is one of our six associated partners and considered, both nationally and internationally, as one of Russia’s best universities. The main campus is located in Moscow, and three regional campuses can be found in the cities of Saint Petersburg, Nizhny Novgorod and Perm.

Alexander Sokolov is the Deputy Director of HSE’s Institute for Statistical Studies and Economics of Knowledge (with a focus on international research and foresight). He is working at HSE since 2003.

Science diplomacy has been a topic for the HSE now since many years. It is an integral part of the curriculum to study the Master’s programme in “Governance of Science, Technology and Innovation” and the university maintains close relations with several international diplomatic missions located in Moscow (each year a HSE University Day for Diplomatic Missions is organised). Regularly, public events related to science diplomacy and its capacities to benefit Russia’s role in international relations are held at the premises of HSE. The HSE also conducts own research on science diplomacy where Alexander is usually involved.

In this fourth stakeholder’s voice, Alexander tells us about his personal background, his assessment of the science diplomacy discourse in Russia and the HSE’s contributions in the field.

A glimpse into the next months: For the end of June/beginning of July we have scheduled an interview with two representatives from the InterAcademy Partnership, another of our associated partners, for the fifth Stakeholder’s voice #5. In the months to follow, we are aiming to open the circle of interview partners also for various other science diplomacy stakeholders outside our direct partnership. Check back regularly for interesting personalities and their thoughts on science diplomacy!

Alexander – could you please introduce yourself including your background and your current position at the HSE?

Higher School of Economics is one of the largest and fast developing Russian universities. My Institute for Statistical Studies and Economics of Knowledge (ISSEK) is the largest research unit at HSE. At the same time I am director of the HSE Foresight Centre. My background is in mathematical statistics and my major areas of interest during the last the 25 years have been Foresight and STI policy.

I am afraid, “science diplomat” can be considered as a formal occupation only for people like science attaches at embassies. If we think of science diplomacy in a broader way, many more people can be attributed to this field, and to some extent you can count me as one of them since I have dozens of colleagues in research institutions and universities worldwide. Many of them have become my friends, we know each other’s families, and talk regularly not only about our work but also discuss more general issues including personal problems.

What is your shortest possible definition of science diplomacy?

Science diplomacy can be defined as a contribution to global peace and understanding via research cooperation and using capacities of traditional diplomacy for the development of international science and technology cooperation.

The Higher School of Economics, your institution, is a renowned academic institution in the fields of economics – not only in Russia, but also beyond. When did science diplomacy start emerging as an important topic both for the design of your study programs and the scientific research that is conducted at HSE?

Can you tell us more about this institutionalised cooperation between HSE and many of the international diplomatic missions accredited in Russia? With which countries do you cooperate and what are the concrete objectives of this cooperation?

As I said before, HSE cooperates with many international diplomatic missions accredited in Russia, although those collaborations are mostly non-institutionalised. The geographic coverage is broad and includes the European Delegation, several EU Member States and Associated Countries, countries from the Asia-Pacific region, countries from the BRICS (Brazil, Russia, India, China, South Africa) and the EAEU (Eurasian Economic Union), among others. Representatives of these missions are regular participants in our annual scientific events, such as the “HSE annual April conference” or the International Academic Conference “Foresight and STI Policy”. The latter was recognised by the OECD as one of the most important global conferences in the field of Foresight and STI policy.

A good example of a new initiative is a series of scientific discussions jointly organised by HSE, the German Embassy and the German House of Science and Innovation (DWIH). The first panel discussion was devoted to innovative profession in the era of digitisation.

What are the core features of the science diplomacy discourse in Russia compared to discourses in other countries?

The Strategy of Science and Technology Development approved by the Russian President in December 2016 clearly states that “developing the mechanism of scientific diplomacy as a kind of public diplomacy” is one of the key instruments to raise the efficiency of Russian sciences srawing on mutually beneficial international cooperation.

This statement as such could be shared by many other countries as well, so there is not much of a specific feature for Russia in that respect. At the same time, during the last years Russia has been under severe international sanctions, which do hamper established cooperation links in many traditional areas. Science is among the few still open windows of cooperation. Therefore, S&T cooperation and science diplomacy as such play a much greater role for Russia now compared to many other countries.

HSE as a university is not involved in political activities. Or as it was stated by a member of HSE International Advisory Board, Nobel laureate Eric Maskin: “HSE should preserve its reputation at a time of political difficulties. To continue with its aspiration to become a university of international repute, it needs to conform with well-established international principles, that university is devoted to academics, a university remains politically disinterested.” But we do our best to expand windows of opportunities for international cooperation as much as possible via our everyday research and education activities.

To your assessment – is science diplomacy currently part of the foreign policy strategy pursued by Russia? Which importance is given to the field by foreign policy networks in the country?

The concept of Russia’s International Cooperation in Science and Technology (ICST) as approved by the Russian Government in February 2019 defines science diplomacy as a “special form of ICST related to the sphere of public diplomacy, which is a system of collaboration between scientists, research teams, organizations engaged in research and development, supported by the government activities that aim to develop international relations, taking into account the interests of the Russian Federation, promote the dialogue with the scientific and technological community and improve mutual understanding among peoples”.

It underlines the role of science diplomacy as “a means of strengthening or restoring mutual understanding, trust and a full-scale dialogue with foreign partners, overcoming stereotypes and ideological division lines“.

Are there any topical activities in respect to science diplomacy HSE is currently implementing, for instance when it comes to public events, research projects or scientific publications?

There are numerous examples of addressing science diplomacy by HSE and our institute in particular.

In 2017, Professor Pierre-Bruno Ruffini from Le Havre University, France (former science attaché of France in Russia) published a book entitled “Science and Diplomacy: A New Dimension of International Relations” in the Springer series on STI studies edited by HSE/ISSEK.

Another example is our cooperation in the area of Foresight. Within our annual conference “Foresight and STI Policy” we usually organise a workshop on S&T Foresight for BRICS countries. This year HSE applied for establishing a UNESCO Chair in Futures Studies. It should be a part of the network of UNESCO chairs for future’s literacy. Since we cooperate in this field with dozens of partners worldwide and with developing countries in particular, we consider this a great opportunity to contribute to science diplomacy. Last year HSE/ISSEK developed a Foresight Study of S&T Development for South Africa financed by the South African Department of Science and Technology. Later this year we plan to publish a book devoted to this study in the mentioned Springer series. A few years ago we, together with colleagues from the European Commission’s Joint Research Centre Institute for Prospective Technology Studies and ZSI – Centre for Social Innovation in Austria, published a paper in the journal “Science&Diplomacy” describing results of an EU-Russia Foresight study conducted in the ERA.Net-RUS project .

Since 2004, HSE/ISSEK has hosted National Contact Points for EU Framework Programmes for Research and Innovation (Mobility, Societies, Science with and for Society) which provide information and consulting support for Russian participants in the EU framework programes for research.

Last but not least, at the request of the Russian Ministry of Science and Higher Education, HSE also contributes with proposals to roadmaps of S&T cooperation between Russia and foreign countries (among recent examples are our contributions to the Russian-German and the Russian-Chinese roadmap).

What is your assessment on tackling the current COVID-19 pandemic in terms of transnational scientific exchange and coordination, so to say a “core characteristic of science diplomacy”?

The current pandemic shows once again the importance of science and technology in addressing global challenges and combining efforts of researchers in responding to them. Science diplomacy should play its role in developing vaccines, medicines, or new and more efficient testing systems. But this is not enough. The pandemic has already shed light to the fact that the world will change dramatically and poses new scientific problems for researchers, in particular in the social sciences and humanities. There is a new agenda for science diplomacy and we should think together how to tackle this agenda in a most efficient way.

The HSE is an associate partner of S4D4C. How, do you think, did this cooperation evolve so far?

We have a long and successful record of cooperation with EU partners and with ZSI, the coordinator of S4D4C, in particular. S4D4C is another opportunity for intensifying this collaboration. We consider it as a very important initiative and have been doing our best to promote the project’s idea in Russia. We are open to new contacts and new activities in order to further promote science diplomacy in Russia and beyond.

Thank you for talking to us Alexander!

This interview was done in the form of a written email exchange in May 2020.

For the website-category “stakeholder’s voices”, S4D4C invites selected experts in the field of science diplomacy and foreign policy to share their insights and knowledge with our readers. The interviews published here resemble the “researcher’s voices” where we feature S4D4C team-members and their views on science diplomacy and the project. With the “stakeholder’s voices” we also show the views of experts who are not directly involved in the project.