The practice of science diplomacy encompasses a spectrum of roles and professional profiles who perform a range of activities and practices, from promoting international cooperation in science from an embassy, to providing scientific advice to a foreign minister, negotiating a multilateral agreement, or navigating scientific collaborations between countries under political strain.

One of the major challenges in defining the roles and characteristics of science diplomats is that there is not yet an established educational or professional pathway. In addition, sometimes individuals working in universities and other nongovernmental institutions might not recognise their actions in relation to science diplomacy, but they can be active agents of it.

The S4D4C European Science Diplomacy Online Course Module 6 “What Set of Skills Do I Need to Be a Good Science Diplomat?” covers the skills and competencies needed to navigate the science-diplomacy interface. Given that the scientific and diplomatic communities have been largely siloed both educationally and professionally, the module explores what should scientists know about diplomacy (and vice versa), what skills should scientists and diplomats hone in order to work together, and what skills each community can learn from the other to bridge the divide between these two worlds.

The webinar was an opportunity to identify and practice the skills most valuable for science diplomats, such as negotiation, communication, networking, leadership, teamwork, observing protocol, working under time pressure or communicating complex scientific information in a way that is useful for policymakers 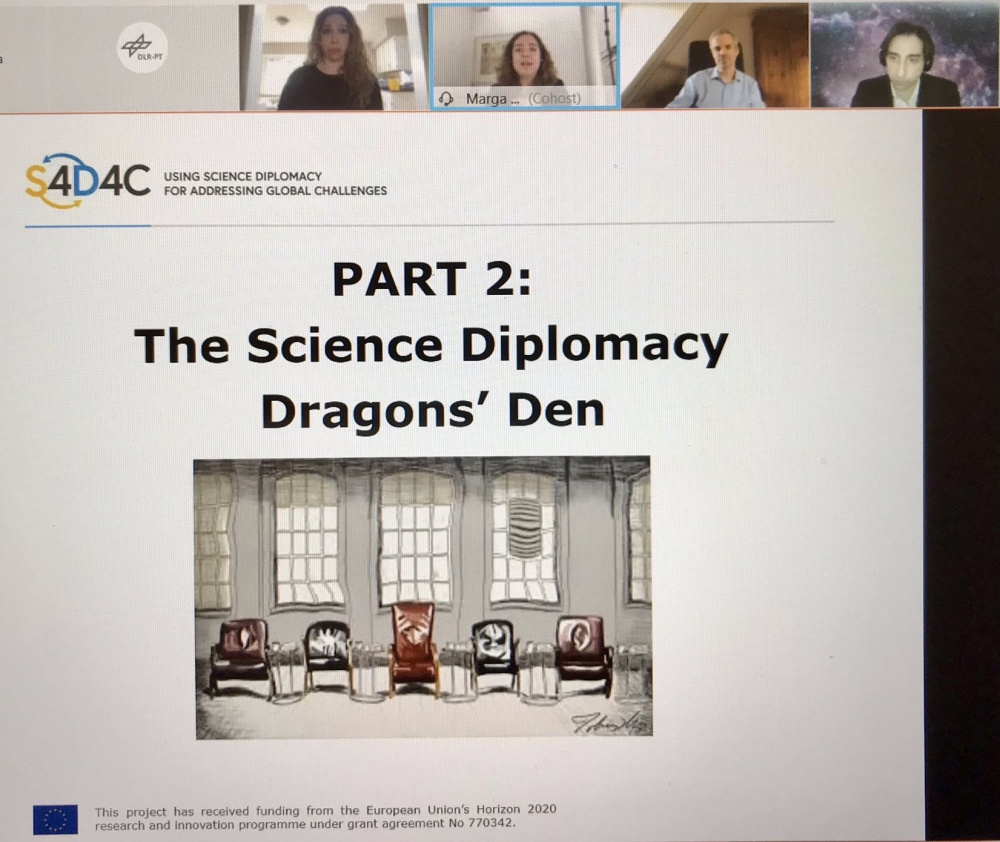 After a brief introduction on the importance of building skills to navigate the science diplomacy interface, Marga introduced the speakers and asked them to discuss what skills are necessary in science diplomacy and how to set structures that could help develop them.

For Lorenzo, understanding what science diplomacy is, and who are the science diplomats is tricky in the first place. In his publication for The Hague Journal of Diplomacy, he established a taxonomy of science diplomacy roles and identified knowledge and skills required to take on those roles. Actors of science diplomacy often come from different worlds and need to develop cross-sectoral, cross-cultural and cross-disciplinary competencies to communicate and work with one another to and ultimately bridge the two worlds.

For JC Maudit, science diplomacy training should already be implemented at the university level. Universities should take advantage of their interdisciplinary nature and bridge different fields together. Higher education is directly interacting with the new generation, which is made of students, not yet scientists or diplomats: they have the opportunity to train the future graduates to be aware of the connection between different fields and able to break educational silos that later become professional divides. Knowledge and skills are interlinked, you can be good at networking but you need to understand the field you’re in to impact.  In his recent paper in Frontiers in Education Diplomacy, co-authored with Marga, they propose a science diplomacy curriculum framework to blend knowledge and skills from both fields. However, there are not yet many opportunities for such courses in higher education around the world. This is an area for further development.

But how can one jump from their university studies into the real world of science diplomacy? Meredith’s career is a good example of putting science diplomacy into practice.  After her studies she became a science fellow in a U.S. diplomatic mission. There, she noticed the different ways academia and science measure success. In the academic world, grants and publications qualify one’s success, but in policy and diplomacy it is much more about connections and relationships.  The current reward system of academic science makes it hard to value the connections of scientists with other fields and sectors.. Marga added that universities should see favorably that scientists spend time in government and international organisations, as they can then return with insider’s knowledge of how public research funding is allocated and therefore help their universities be more competitive.

JC commented that this mindset already starts during the formative years: we could imagine bringing policy makers and diplomats to campus (many U.S. universities have a ‘diplomat in residence’). Meredith recommends to organise informal meetings with policy makers and learn their language. For example, student-led organisations like the National Science Policy Network (NSPN) help connect graduate students with policymakers.

Working in the field, Meredith has learned that scientists have a valuable skill set: the scientific way of thinking, which makes them capable of analyzing information in different situations, even if they are not experts in that specific field. We should not be afraid to participate in discussions where we are not experts: we can still greatly contribute if we are clear about what we don’t know.  Asking questions to always learn something new: that’s the key to create connections between fields.

Lorenzo linked back to Meredith’s suggestion to ‘have a coffee with a policy maker’. For him, taking your own initiatives is extremely important. There are not many established science diplomacy measures, and if you want to engage you might have to create something new. Lorenzo recommended the audience to start by addressing their institution’s international affairs department. They might be open for you to help-out/volunteer there for a few hours a week. Scientific professional associations sometimes have science advice departments; if not you can establish them. There is a growing understanding of the importance of knowledge exchange and interdisciplinarity in most institutions.

For example, the Royal Society Pairing Scheme pairs UK scientists with British MPs. During that process scientists and policy makers share their daily work, and it enables scientists to really understand how to navigate a policy environment.

When Lorenzo was a science advisor at the Spanish Embassy in London, he also launched its own project and set up the “Ambassadors for Science” programme which brought scientists and diplomats together.

For JC, both worlds are increasingly interested in connecting and bottom-up initiatives are growing. However, policy engagement at the university level is also key, to bring together individual initiatives, diplomatic engagement and future professionals.

After the panel discussion, participants were moved to the Science Diplomacy Dragon’s Den for an interactive exercise to design and pitch a science diplomacy project.

In this part of the event participants were asked to imagine that the Office of the UN Secretary-General has invited S4D4C to convene a High-Level Policython-style event to crowdsource Science Diplomacy Approaches for Addressing Global Challenges. Six teams from around the world had the opportunity to pitch their most innovative ideas for science diplomacy strategies, instruments or mechanisms around two global challenges: the climate crisis and pandemics.

The teams had 45 minutes to agree on a topic and present their strategies. Each team chose a spokesperson, who was invited to pitch the group idea to the UN Secretary General, impersonated by S4D4C project coordinator, Elke Dall.

Innovative ideas were pitched, like the ‘Green Helmet Think Globally, Act Locally’ initiative, or the ‘Pandemic Taskforce; from Fast to  Ready” to name a few. The groups presented their objectives and how they will approach potential collaborators, address risks and harness opportunities so as to tackle their chosen global challenge using science diplomacy tools and practices.

During the preparation of the pitches and the presentations, our guest speakers and S4D4C members acting as moderators assessed whether the participants were putting certain skills into practice, such as respect for protocol, avoidance of jargon, communication, collaboration and cross-cultural awareness.

After the exercise, Meredith congratulated the participants for their great performance and gave them feedback on their pitches,emphasising the importance of bringing ‘the bottom line upfront’: scientists often like to explain s in detail the justification for their arguments, but in a diplomatic context one should address first the most critical points that need to get through so as not to lose the attention of policy makers.

Lorenzo and Marga observed that the teams did a great job working under pressure and managing uncertainty, conditions that are often the norm in real-world scenarios.