Our last interactive webinar on our online course took place on the 17th of December 2020.

Practical examples of science diplomacy are key to the understanding of what science diplomacy is. A mixed team of researchers from the S4D4C consortium and the sister project InsSciDE have created empirical and historical case studies, some of them already were introduced in the S4D4C European Science Diplomacy Online Course. They give answers to the questions:  What is the science diplomacy dimension on each particular case? Who are the main stakeholders for each practical case and what are their interests? And what are the relationships between EU, MS and global challenges evident in these real-lif scenarios? The webinar gave our participants the possibility to get into a real-time exchange with six case authors and science diplomacy experts and learn about their work, results and recommendations.

The session started with the usual interactive ice-breaking session where participants were asked about their background but also to reflect on their approach and understanding of science diplomacy, like showcased by the picture below. 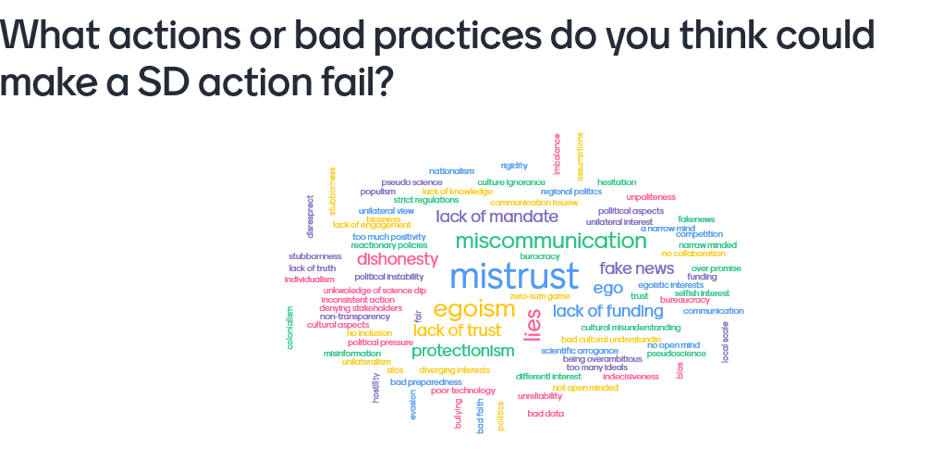 The audience was then invited to take part in one of the break out session which each covered a different case study and was led by either/or actors of the study and case authors.

In addition to these very concrete examples, Charlotte Rungius introduced some of the more general insights from the S4D4C research:  the cases had been anaylsed  transversally – from a bird´s eye perspective – with the objective to look for aspects or dimensions of science diplomacy that ‘mattered’ for both:understanding and practicing science diplomacy. This resulted in a set of 10 ‘matters’, which were introduced to our audience by Charlotte.

Charlotte then highlighted a few matters such as the individuals matter, that is important because it highlights the core role of people that transcend their professional spheres and integrate different ambitions within their job, while science diplomacy is not formally part of their job title. Science diplomacy relies often on creative individuals that bring new initiatives and ideas.

Her presentation was followed by another concrete example of science diplomacy in practice.  James Hammond presented his experience as a UK scientist trying to conduct a research project in North-Korea with American and North-Korean researchers.

James and his team, having identified a Volcano of geological interest for their research in North-Korea, went through a complex, but successful, endeavour to set up an international team between countries that have a tensed political relationship. The geopolitical intricacies of setting up such a project were truly challenging, and for James, scientists often lack experiences to navigate them.

The project required a lot of communication and building trust was absolutely essential. They also had to convince their own national government of the importance of the science that they were conducted, despite the sanctions against North-Korea.

The context of ever-changing political situation was hard for the team, and they needed to be flexible and to adapt to be able to move forward.  For example, new restrictions on scientific collaboration were imposed by the security council, James team then had to negotiate to be granted an exemption.

James presentation perfectly illustrates what science diplomacy can be in practice: a means of building trust. His presentation was followed by a few questions from the audience.

To the question of whether he felt sometimes personally in danger, James replied that it was not the case. He understood that he had to stick to the science, respect the rules and to stay away from being politically involved and that has been working well.

After this enlightening presentation, Nadia Meyer, chair of the session, thanked all the participants and together with S4D4C coordinator, Elke Dall, officially closed the webinar series.

While the interactive webinars are now officially over, respective summaries are still found on our website here. In addition, the online course is available for free on our website.

The S4D4C project team thanks you for your participation our webinars and we are looking forward to interacting with you again during our final networking meeting.