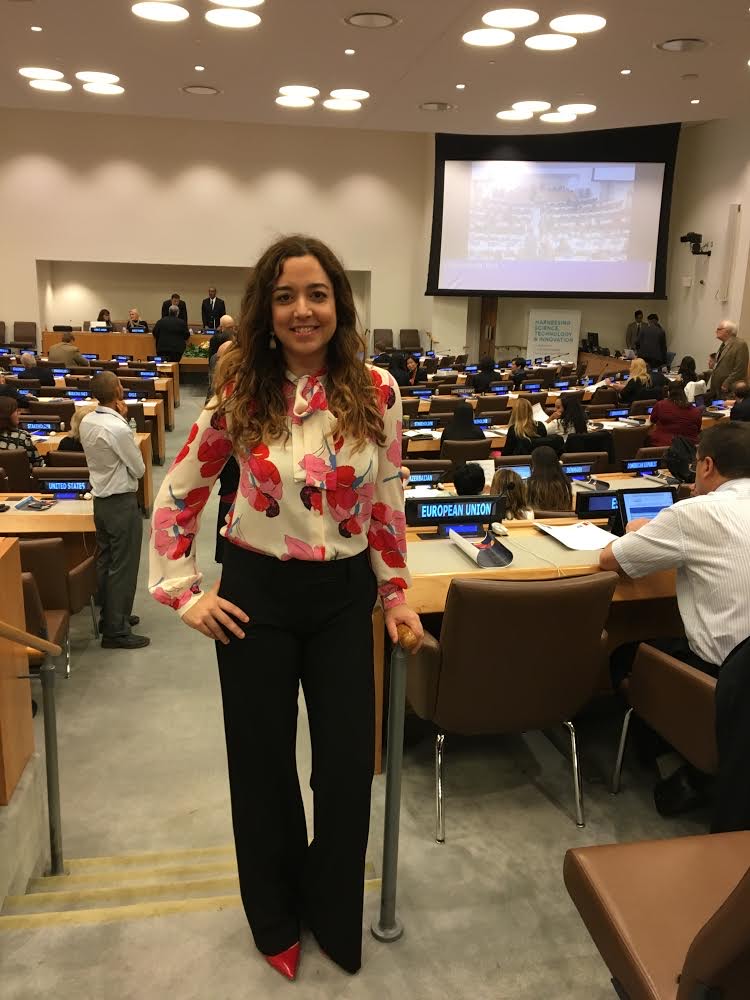 For this new researchers’ voice, S4D4C team member Marga is sharing her insights with us. Marga is a scientist engaged in the advancement of science diplomacy and the founder of SciDipGLOBAL.

She has collaborated on science diplomacy strategies with the American Association for the Advancement of Science (AAAS) and as an advisor for several governments.  In the S4D4C consortium, Marga contributed to the development of training materials as well as to sessions in the Networking meetings in Madrid, Berlin and at the final networking meeting.

In this researcher’s voice, she talks to us about her pathway from science to science diplomacy as well as some peculiarities of the Latin American approach and of gender equality in the field.

She also shares her thoughts on current and future developments of science diplomacy and her takeaways from the collaboration within S4D4C.

After almost a decade-long career in science diplomacy in different sectors, countries and continents, what challenges have you encountered moving from your bioscience background to science diplomacy?

During my PhD, I realised that, no matter how important the discoveries, there was very little scientists alone could do to address global challenges, unless we collaborated more closely with policy makers and international organisations. I moved to the United Nations in New York to see how science contributes to global decisions. There I realized how siloed -educationally and professionally- the scientific and policy communities were. To be effective, I first needed to complement my scientific background with policy and diplomacy skills to be able to navigate both worlds. I was selected for an executive leadership program at Georgetown University in Washington DC, followed by a postdoctoral fellowship with the AAAS Center for Science Diplomacy to study science diplomacy in Latin America. I taught myself social science methods, which can be very different from research in the natural sciences. This was 2013, and we’ve come a long way – thanks to S4D4C and other efforts to bridge the two worlds. We now have dedicated training programs in science diplomacy and structured mechanisms to place PhD scientists in policy environments, although these don’t exist in most countries yet.

Science diplomacy has not yet been formalised in higher education and professional opportunities remain limited. Courses and trainings help people understand the role of science, technology and innovation in foreign policy and international relations, but there is no established career path. If you search for job ads with the words ‘science diplomacy’ there are few options beyond the well-established positions of embassy science attaches or science advisors to foreign ministries. But that doesn’t mean they don’t exist, you just have to identify how your scientific field or discipline (health, oceans, climate, agriculture, space, biotech, etc.) intersects with global policy issues. With scientific topics like infectious diseases or climate change entering foreign policy agendas, and the growing importance of non-state actors in diplomacy, these opportunities will expand. In our curriculum we propose to train a new kind of “boundary-spanning” science diplomacy professional, fostering skills that aren’t typically taught in STEM education, like negotiation, communication, networking, interpersonal skills and cross-cultural dexterity. At the end of the day, the best way to gain experience in science diplomacy is through immersive learning opportunities, like fellowships, internships and pairing schemes placing scientists in governments, embassies and international organisations. However, in many countries there is still resistance to the idea that a scientist can work in sectors other than academia. We’re working to foster the institutional demand in governments and the academic incentives.

You have been involved in S4D4C and InsSciDE from the European Union-Horizon 2020 Science Diplomacy Cluster. What are your takeaways from the projects?

After more than 10 years abroad, it was fantastic to return to Europe and help the EU take the lead in science diplomacy discussions globally. Thanks to the vision of former Commissioner Moedas, science diplomacy became a research field in Europe. The EU Science Diplomacy Cluster connected dozens of institutions from the academic, government and multilateral sectors, and together we have engaged thousands of people in vibrant networks and communities across Europe, developed open source training materials, and issued statements, policy briefs and recommendations to connect European science and foreign policy goals and develop solutions for global challenges. And the impact of S4D4C has been felt across the world, from India to Australia to Latin America. The Madrid Declaration on Science Diplomacy has become a model for many countries to guide their science diplomacy initiatives.

You recently founded SciDipGLOBAL. What are your plans for this new organization?

Our core mission at SciDipGLOBAL is to build institutional and individual capacities in science diplomacy and strengthen science-policy interfaces at all levels, through research, strategy, policy advice, and training. We do not have a national or regional agenda: we choose our projects based on their potential to have the highest impact, regardless of country or sector. And all our work is collaborative to pool resources, expertise and maximize impact. For example, we launched a science diplomacy fellowship with the National Science Policy Network (NSPN) in the United States, designed a training program for the IAI Science and Technology Policy Fellowship (STeP) in Latin America, and are supporting the new Geneva Science and Diplomacy Anticipator (GESDA) in Switzerland. And we are proud to be founding members of the EU Science Diplomacy Alliance to continue the legacy of the EU Science Diplomacy Cluster.

In 2020 you published a policy report on the landscape of science diplomacy in Latin America and the Caribbean and updated the section of the S4D4C European Science Diplomacy Online Course focusing on this region. What is the approach to science diplomacy in Latin America, considering the Global North-dominated discourse as discussed at the S4D4C Final Meeting in the session “Harnessing Knowledge for Global Challenges”?

There is an ongoing effort to contextualize science diplomacy to the needs and realities of the Latin American region, as most of the landmark examples and case studies from the United States or Europe are not relatable. Panama was the first Latin American country to launch a national science diplomacy strategy, in part inspired by the Spanish one. Colombia and Costa Rica are now in the process of designing their strategies. There are also interesting sub-national efforts in São Paulo and Mexico City and regional initiatives like the IAI Science and Technology Policy Fellowship (STeP), which includes a yearlong science diplomacy training program. This diversity of approaches shows how science diplomacy is not limited to national governments, and it works best when multiple actors operate at different levels. To learn more, join the upcoming Latin America Open Science Forum (CILAC) on April 26-28.

You are one of the guest editors of the AAAS Science & Diplomacy Special Issue on the role of science diplomacy in the post-Covid-19 world. What are the main takeaways?

Until the coronavirus crisis, the words science and diplomacy were rarely pronounced together. COVID-19 is a live case study that has given us unprecedented, real-time insight of how science advice, science diplomacy and science communication operate in practice. Countries have recognized the need for better connections between science and policy, and for more robust international coordination, but most still lack ways to integrate science and technology in their foreign policy structures. Contributions from different parts of the world show that there is no ‘one size fits all’ model, these structures need to be adapted to the system of government, political, economic, and scientific context and needs of each country. In our editorial we call for science, health and the environment to become critical elements of foreign policy, national security, and multilateralism. And we need to update our international legal frameworks and governance architecture for 21st century challenges – the recent proposal for a Pandemic Treaty is a step in that direction.

You also participated in Homeward Bound, the largest expedition of women in STEM to Antarctica. A group of your alumnae of the 2018 AAAS science diplomacy course started a discussion around women in science diplomacy. What are your thoughts about gender equality in this field?

Women face a double underrepresentation in science diplomacy, as both ‘parent’ fields are male-dominated. While S4D4C has not systematically analyzed the composition of the science diplomacy community, we have noticed a stronger involvement and interest from women. For example, a dominant demographic among the applicant pool to science diplomacy courses are women with STEM PhDs, many expressing a desire to leave academia. If this correlates with the so-called “leaky pipeline” of women in academia when they should be progressing to leadership roles, it would be concerning, as science diplomacy is not yet an established and sustainable career path. But we also know that women and scientists from underrepresented groups are more committed to science for societal impact, which might explain these trends. We are currently looking to study this in more detail. As a relatively new field, we have an opportunity to correct the imbalances from early on. One program seeking to elevate women in science diplomacy is Homeward Bound, based on the premise that the climate crisis cannot be reduced to an environmental, scientific, economic or political problem: it’s a leadership issue. I joined 100 women in STEM from 35 countries and different backgrounds, career stages and disciplines in the largest all-women expedition in Antarctic history to help build more evidence-informed, diverse, collaborative and inclusive policy structures.

Where do you see science diplomacy going in the next years and decades?

One key area of focus for science diplomacy in the coming years will be the technological convergence of frontier technologies (artificial intelligence, quantum computing, synthetic biology, gene editing or climate-altering technologies) with political and societal issues. While rapid scientific advancements can help us achieve the UN Sustainable Development Goals, they can generate enormous risks and challenges for democracy and multilateral governance. This is because technologies are becoming strategic sovereign assets and critical infrastructure for national security, and this can amplify social inequalities, perpetuate racial and gender biases, and deepen geopolitical divides, as we are seeing now with vaccine diplomacy. I recently reflected about the future of science diplomacy 25 years from now. Foreign ministries are engaged in an interesting debate around science diplomacy and tech diplomacy – should they be joint or separate tracks? As the lines between basic sciences and technological applications will blur, it will be increasingly difficult to govern and manage the geopolitical, ethical and societal implications of scientific breakthroughs such as human augmentation or climate-altering technologies. Scientists and policymakers will need to work together on an anticipatory, rather than reactive basis after the technologies are deployed. A clear example is solar geoengineering: the US National Academies of Sciences recently called for a research agenda to understand its technical feasibility, impacts on society and the environment, and global governance models. In summary, the institutional architecture of science diplomacy will need to adapt to the scale and speed of the transformations ahead with a multi-stakeholder and whole-of-society approach.

Thank you Marga for your insights!

If you liked this article, have a look at all previous researcher’s voices published by S4D4C HERE.