The second episode of our interactive webinar focused on deepening students’ understanding of module 3: Who Are the Science Diplomacy Stakeholders?

The webinar offered an interactive learning experience combining discussions between experts on the content of the course and interactions between all attendees (experts included) through discussion groups.

The webinar started with the S4D4C video available on YouTube since 1st October 2020, conceived to introduce the concept of science diplomacy and its potential to handle global challenges.

Elke Dall, project coordinator of S4D4C, warmly welcomed the 190 attendees before giving the floor to Ana Elorza Moreno, one of the authors of Module 3 of the S4D4C online course and chair of the second webinar. Ana introduced the outline of the webinar and kick-started the first interaction with the audience through an ice-breaking session using the online survey tool Mentimeter. Another S4D4C partner and Module 3 author, Izaskun Lacunza, asked the audience a number of questions via the online tool. 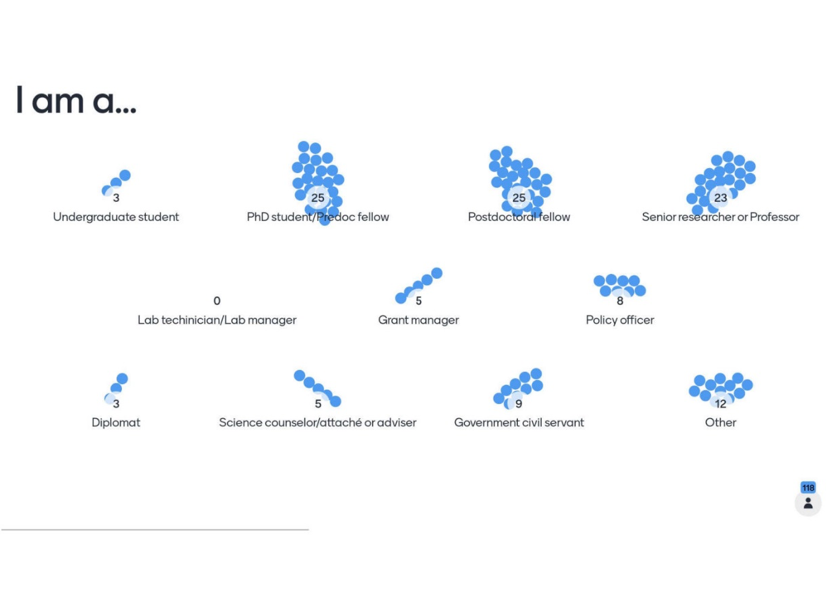 As observed in the first webinar, many attendees shared a research-oriented/scientific background. But also, governmental representatives took part in the intensive discussion. 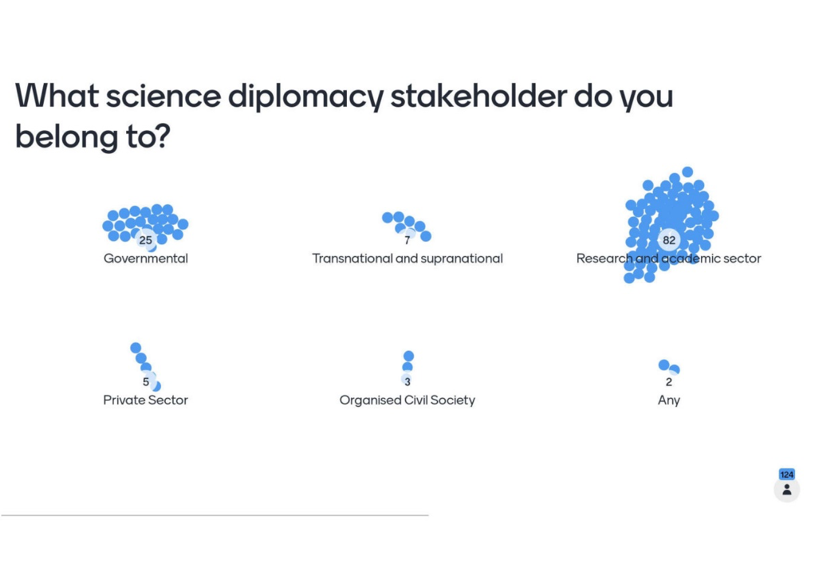 According to the expectations of attendees, their interests greatly matched the webinar´s purpose: Science policy, science diplomacy and research were the main topics of interest.

The webinar was a truly international event: The attendees represented more than 45 counties covering almost all continents. 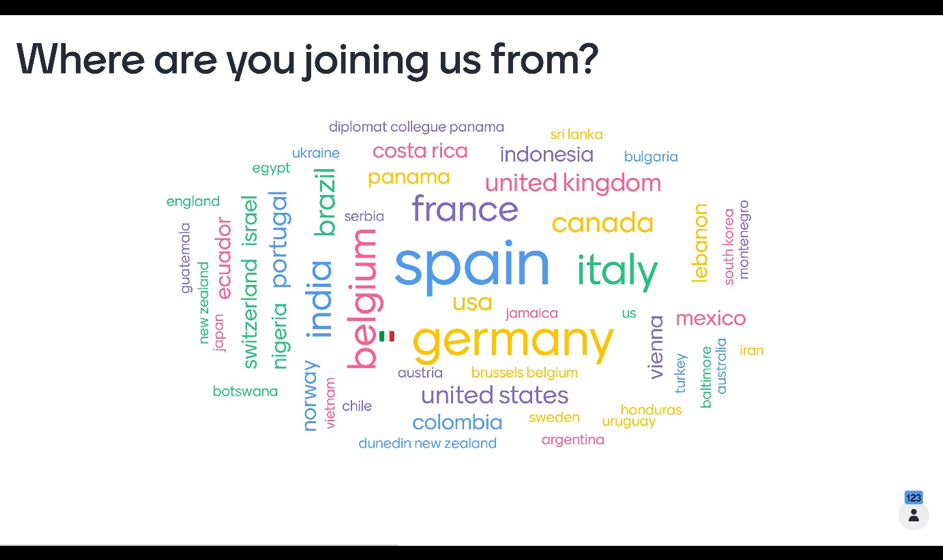 Approximately half of all attendees have been already involved in science diplomacy networks.

The following roundtable was composed of four guest speakers who explained the variety of science diplomacy stakeholders and networks in a changing international scene. While Alexis Roig provided the audience with his expertise in establishing Barcelona as a global lab in science diplomacy, Maria Esteli Jaquin presented policy perspectives on how different countries in Latin America implement SD strategies. As a scientist in climate change, Melody Burkins appealed to strengthen the focus of different academics on policy and diplomacy. With her international diplomatic background, our S4D4C colleague Sheila Perosa described the roles of policymakers, diplomats, international organisations, civil servants and the private sector in the SD world.

The first section of the discussion focused on how the research community could be more engaged in solving global challenges problems. Melody underlined that research education is needed and science should be a part of the political discussion. Alex added that researchers should be better involved in policy processes. The skills of the diaspora should be used in policymaking. One example of such kind of connection offers the Barcelona Alumni Network with its 1.000 members trained on spot. For Maria, the role of the diaspora is crucial for building SD connections. In Costa Rica diaspora activities have been mapped with the aim to identify concrete success stories.

“The network of internationally mobile students and the scientists they become is arguably a public good. It is not just students and scholars who are moving across borders: so are scientific programs, research projects and education policies”

Sheila described the roles of further stakeholders outside the scientific community: Diplomats are representatives of different countries who do not present personal opinions. The policymakers are “decision takers”: Their intention is to ensure consistency among countries and different stakeholders. In contrast, international organisations are the “principal makers”, they offer facts and information base. The private sector is also involved as a provider: its incentive is “profit”. Science diplomacy activities build on a mix of different incentives.

The second section of the discussion was dedicated to how to better understand the depth and the complexity of SD approaches of different stakeholders. Melody underlined the need for scientists to learn more about policymaking processes. For Maria, the political culture differs in different countries and we have to find a way how to embrace this diversity. But also at the urban level, as Alexis presented, the centrality of SD activities and the coordination among actors are essential. Therefore, cities should be additionally involved in SD strategic debates. The participation of different stakeholders depend on the degree of legitimacy, priority setting and planned actions. Alexis recommended the involvement of different stakeholders in the preparation of action plans (even at EU level).

At the end of the roundtable, the panellists discussed how to bridge the gap between the different professionals. Sheila suggested to better develop science advice channels. For Melody, incentives for international exchange should be set up especially for PhDs, in an early stage of career development.

For Maria, transdisciplinarity should be the flagship for the transition. Science diplomats need special technical as well as soft skills (e.g. networking) for their work.

“In the 21th century, scientists and diplomats need to be prepared to work in a more collaborative interdisciplinary way. We need to start training people who want to keep both a scientific and diplomatic background active.”

The roundtable was followed by a Q&A session. Lorenzo Melchor, another S4D4C partner and Module 3 author, identified three main topics in the chat:

To bring out the interactive aspect of the webinar further, in the second part of the webinar, attendees were divided into small groups (10 people) and were invited to take part in an “Out-Of-Reach” exercise. This activity involved a simulated scenario where the attendees were a part of an expert committee gathered in an unknown location. Their mission was to assemble a team of five organisations to solve a disease crisis affecting different countries in the world. The participants received a list of 10 different science diplomacy stakeholders. The task was to choose five in terms of their importance for the “mission”. WHO, European Commission and IPCC were selected by the majority of the teams: 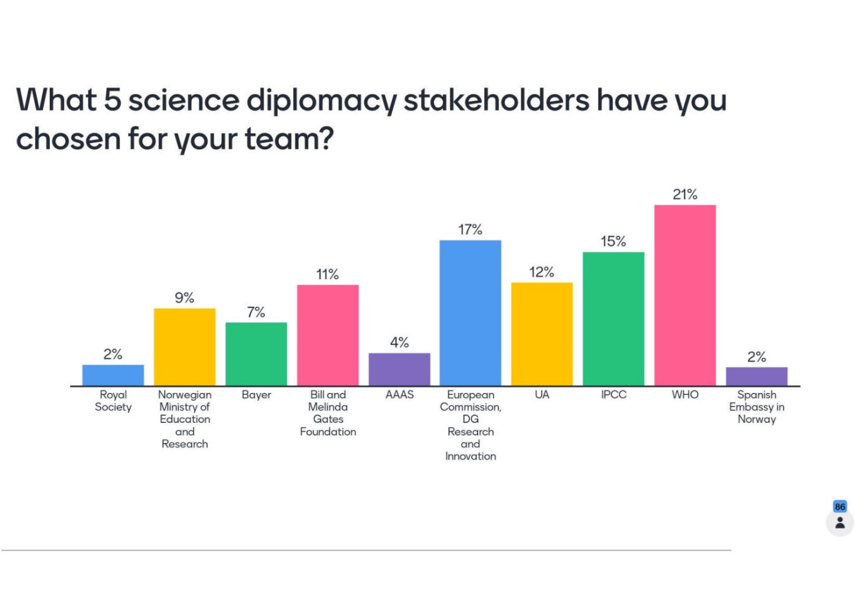 The selection criteria were varying: location, neutrality, knowledge, networking, diversity, experiences etc. were some of the keywords mentioned by the participants.

The second interactive webinar ended on the thank you words of Ana Elorza Moreno and Elke Dall, inviting the audience to participate in all of the following webinars.

If you are not yet registered for the online course, just click here.